Trial for the crime of Fernando Báez Sosa: on the first day of allegations, the prosecution and the complaint requested life sentences for all the defendants 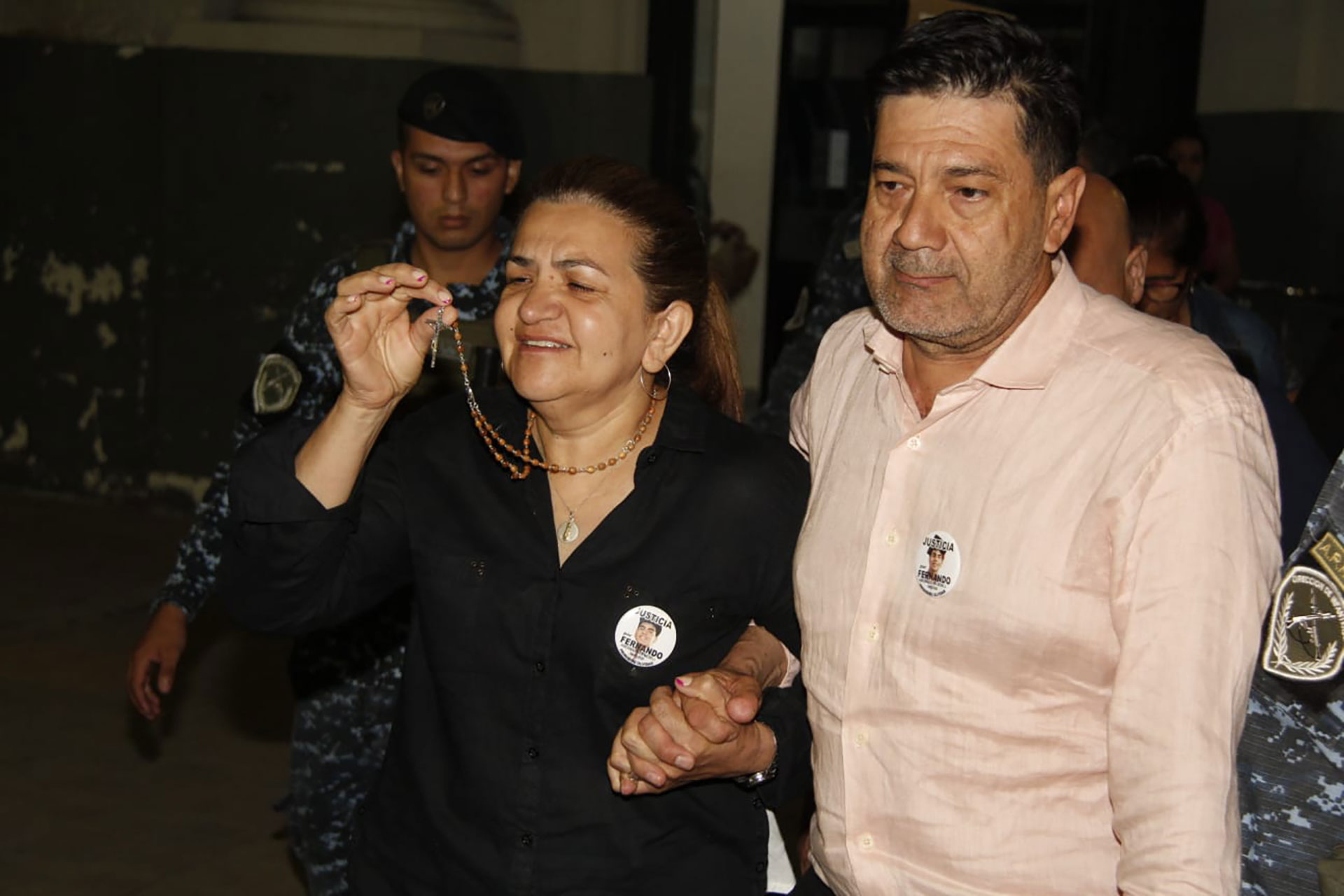 Graciela, the mother of Fernando Báez Sosa, spoke after the first day of allegations

The claim of the parents of Fernando Báez Sosa, after the day in which the prosecutor’s office and the victim requested the maximum sentence for the eight rugby players accused of the crime: “My son was murdered in the worst way, and I want them to pay because they are murderers. They had no mercy on my son, I want them to pay and give him the maximum sentence. That the pulse of the judges does not tremble. I trust justice,” said Graciela, the victim’s mother.

Silvino, for his part, confirmed that this Thursday, when the arguments are resumed with the presentation of the defense, they will speak in front of the judges before they retire to deliberate and give their verdict.

After the allegations, Hugo Tomei asked that the data be taken from Fernando Burlando’s technical assistant who helped him with the videos and, then, the president of the Oral Criminal Court No. 1 of Dolores decided to go to an intermediate room until this Thursday at 12, where the defense will make its presentation. “And on Friday too,” the rugbiers’ lawyer launched as a joke. 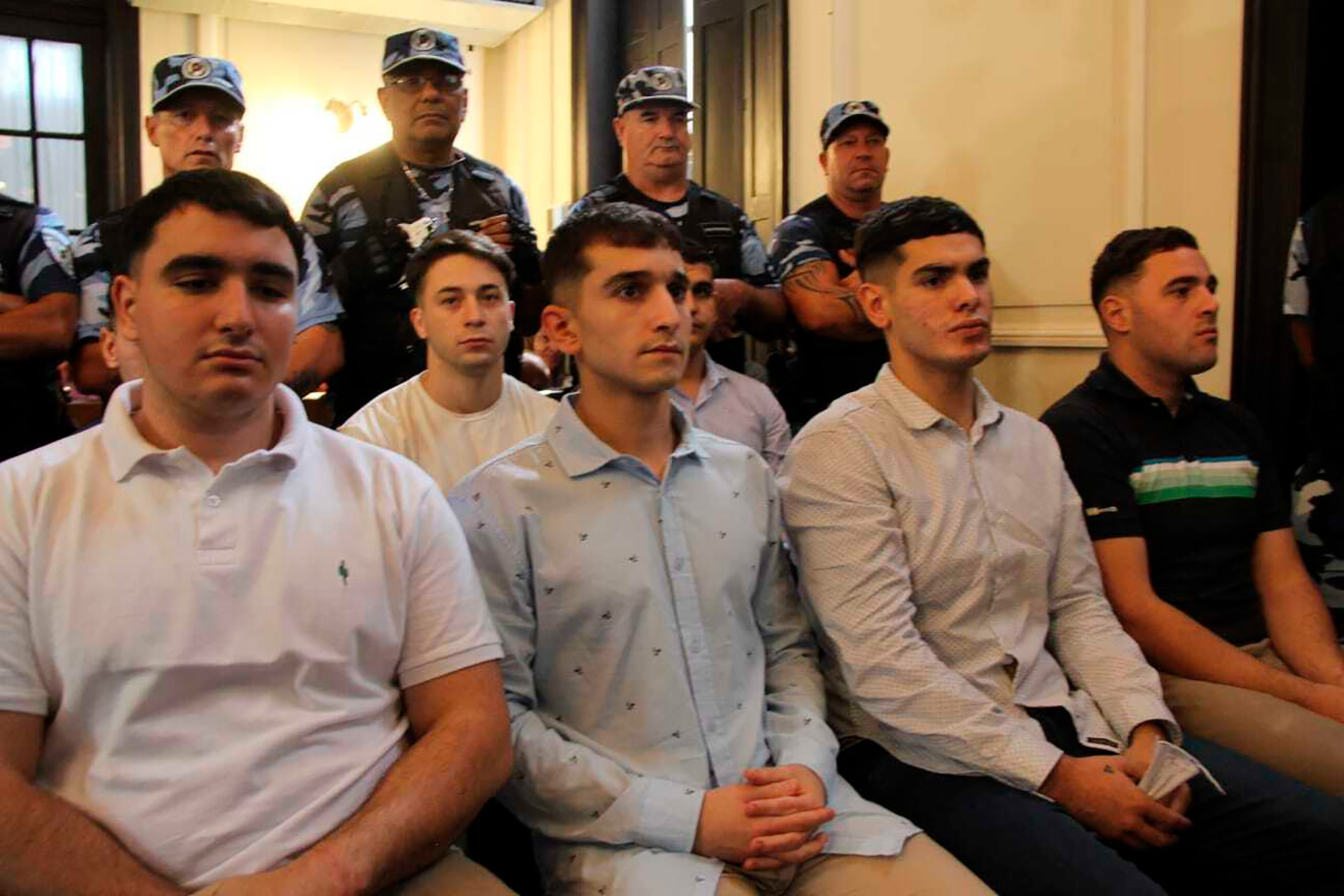 Fernando Burlando, in closing his argument, spoke to the court about “the extent of the damage.” “All the attitudes of the accused to evade justice, hinder the investigation and erase what for us is indelible must be taken as an aggravating circumstance; as well as the chats”, mentioned the lawyer.

And, in this context, Burlando asked for the eight rugbiers, whom he named one by one, that they be sentenced to life imprisonment as co-perpetrator of the “aggravated homicide due to treachery and the premeditated competition of two or more people to the detriment of Fernando Báez Sosa, in competition with minor injuries to life imprisonment. 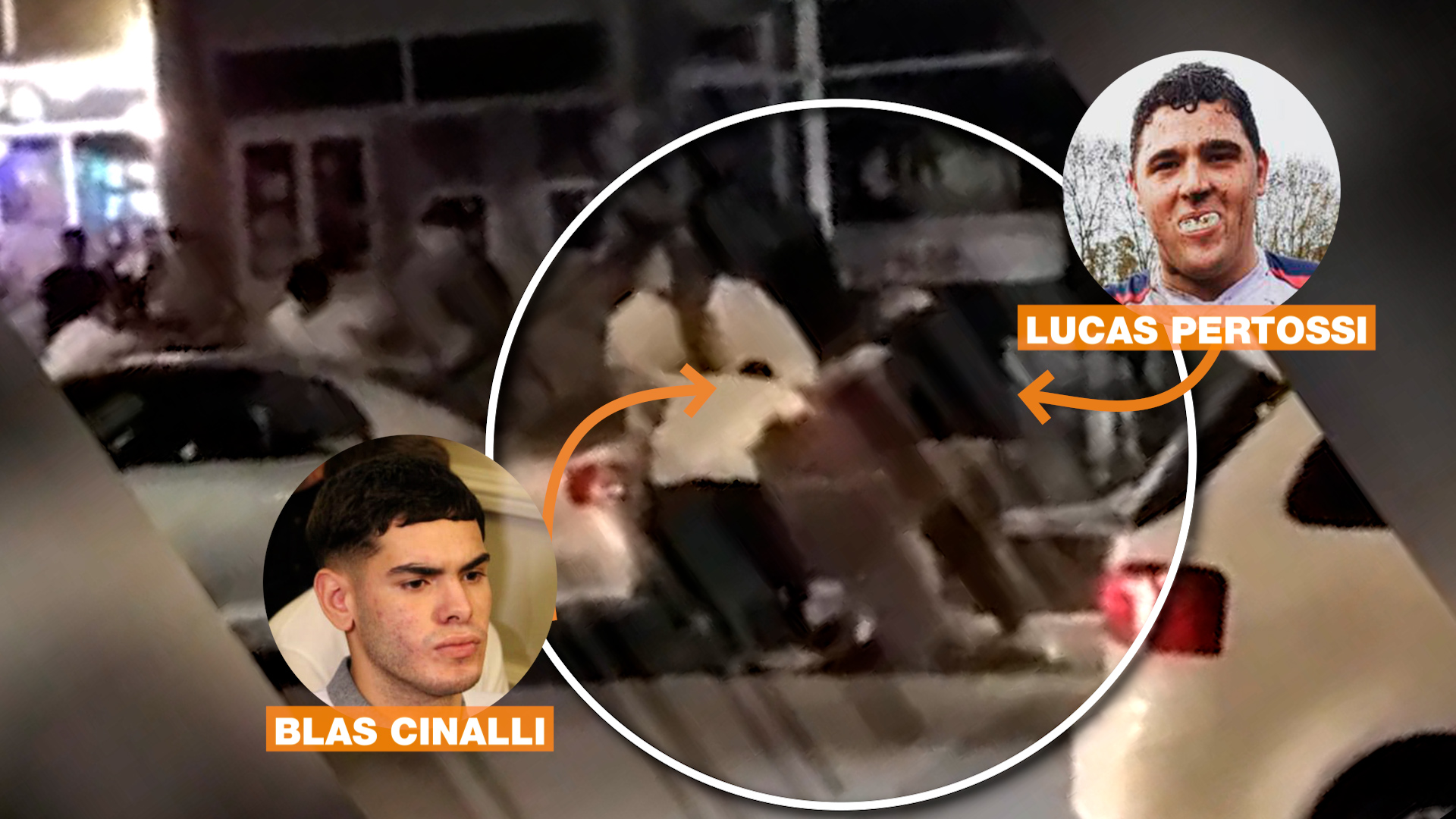 While Burlando with the videos identified Luciano and Lucas Pertossi, Blas Cinalli, Matías Benicelli, Máximo Thomsen, Ayrton Viollaz and Enzo Comelli; The lawyer referred to Tomás D’Alessandro, Fernando’s friend who was also beaten up by the rugby players. “He is an example,” said the lawyer about the boy who was a witness and attended 12 of the 14 hearings.

D’Alessandro’s mother broke down crying inconsolably, and her son hugged her.

The videos that Burlando projects in the room

The rugbiers at the exit of the Le Brique bowling alley, video presented in the trial for the crime of Fernando Báez Sosa

As part of his pleadings, the lawyer for the victim projected short videos that were reproduced in the trial hearings but enhanced by technology.

In the first video, you can see the scene of Máximo Thomsen in the bowling alley, when a patovica wants to take him away and makes a gesture with his finger passing it from left to right through his neck. “He points, he points to the place where Fernando was. It wasn’t random… In a clear announcement that ‘you’re dead’, and that’s how it was,” Burlando released.

Then, he showed another short with a movement tracking, precisely, of Thomsen to “clarify the conduct” of the rugby player, according to the lawyer. Later, he did the same with Enzo Comelli. “There you can see him a few centimeters from Fernando Báez Sosa,” he said while the audio of the video played “alto quilombo, they made him see…” ”. And he also identified Ciro and Luciano Pertossi, and Ayrton Viollaz.

While the third filming was the beating between the two cars that is recorded from the sidewalk in front of where the deadly attack took place.

After Fabián Améndola’s allegation, Fernando Burlado took the floor and Hugo Tomei immediately interrupted asking about the video that his colleague will use. The president of the Oral Criminal Court No. 1 of Dolores warned the defender: “The broadcast of the images will be allowed.” The reason? The judge remarked that “it is not proof.”

With treachery and in premeditated competition

“The plan is accredited from the form of commission of the act. They did not choose just any form: they chose a treacherous form”, shot Fabián Améndola over the rugbiers. “They agreed to kill among all of them, in the way they were going to do it, they entered to deliberate the way. There is no need to talk about the division of roles because everyone hit Fernando Báez Sosa and everyone prevented him from receiving any kind of help ”.

And he continued: “There was a synchronized attack that we see in the videos. We see it in Máximo Thomsen and in “croniquita” (Lucas Pertossi), who is the one who is going to be in charge of taking the images… This attack was coordinated, synchronized, with speed and precision”. To which he added: “The stalking lasted 7 minutes, during that time, they were surrounding Fernando Báez Sosa and his friends, without them or the police officer noticing.”

After this, Améndola said that the crime against the defendants is “doubly aggravated homicide for its commission for treachery and for the premeditated participation of two or more people.” And she closed: “We never cared if it was Thomsen’s shoe. Death is not produced by a single blow but by a combination of them.

Neither preterintentional homicide nor in a fight 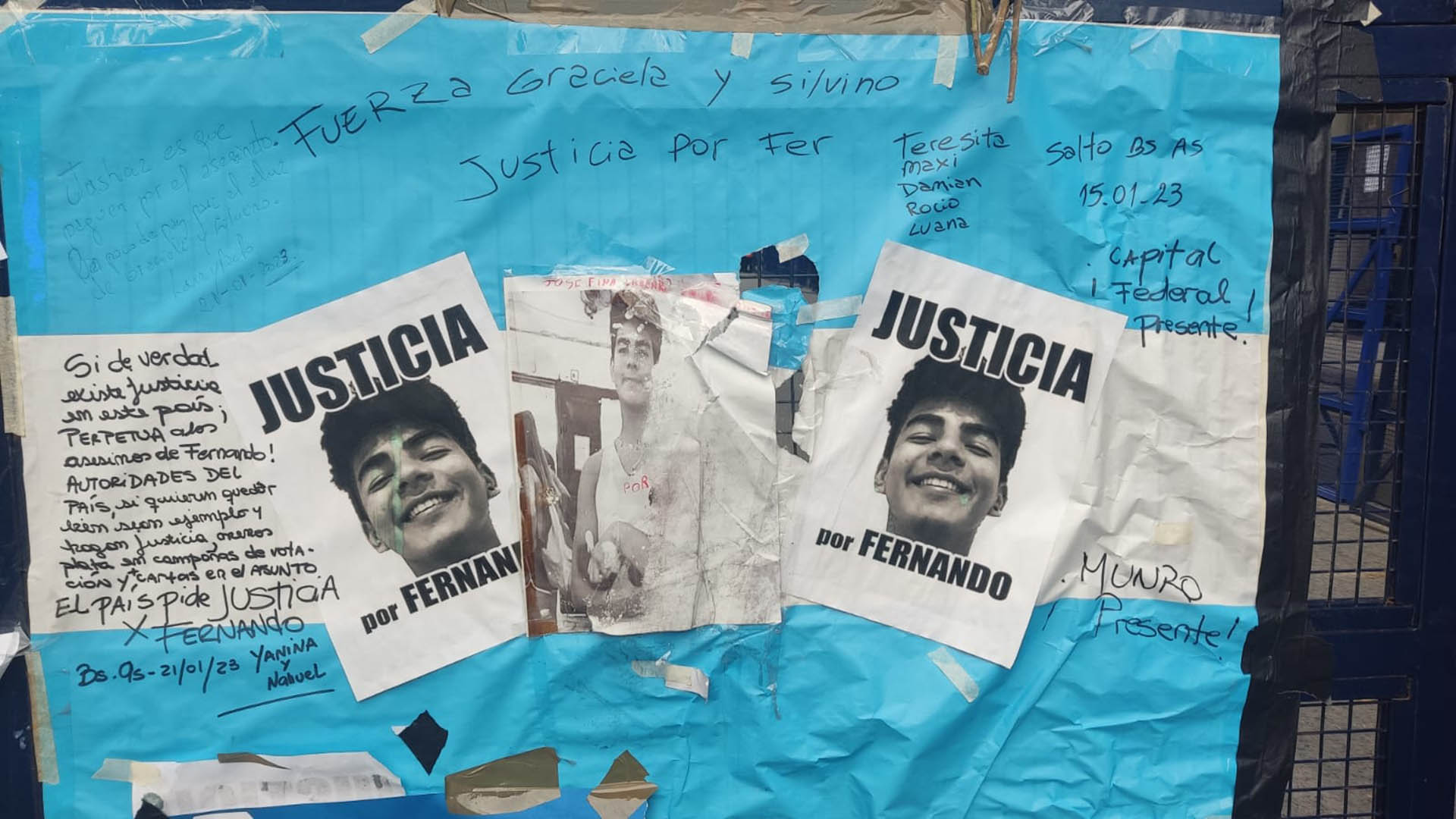 Then, Améndola continued with a plea determined to address why there is no room for other legal figures to saddle the rugbiers beyond the co-authorship of Fernando’s murder.

Thus, he repaired to demolish why he considers that it cannot be framed in a preterintentional homicide. “Thomsen, among all the lies that he declared, said that he never thought he had the intention of causing the death of a person,” he stressed and reasoned: This figure must be discarded because… the Penal Code asks for requirements to be applicable . I will be able to say “I did not have the intention of killing Fernando Báez Sosa’, but the means used for that does not allow any doubt that it was a reasonable means to cause the death of the victim.”

Then, he referred to the figure of homicide in a fight or assault, to which, according to the lawyer, “the defense would refer.” The lawyer says that, in these cases, “criminal responsibility is in the result.” And he added: “Whether the fight (when there is a fight and reciprocal blows, and the roles of the aggressor and the victim are confused because the attacks are from both sides) or the aggression (attacks from only one party) has to be spontaneous. It cannot come from an agreement, as the Public Prosecutor’s Office has proven”.

In his turn to plead for the individual victim, Fabián Améndola referred to the version of the accused Blas Cinalli, Máximo Thomsen and Ciro Pertossi and their drunken state. “There is no chemical test or medical examination to indicate what his condition was,” the lawyer remarked.

The hearing resumes after the fourth intermission. Fabián Améndola takes the floor for the individual victim.

Our children are bored at school

3.5 magnitude earthquake with epicenter in the city of Socaire