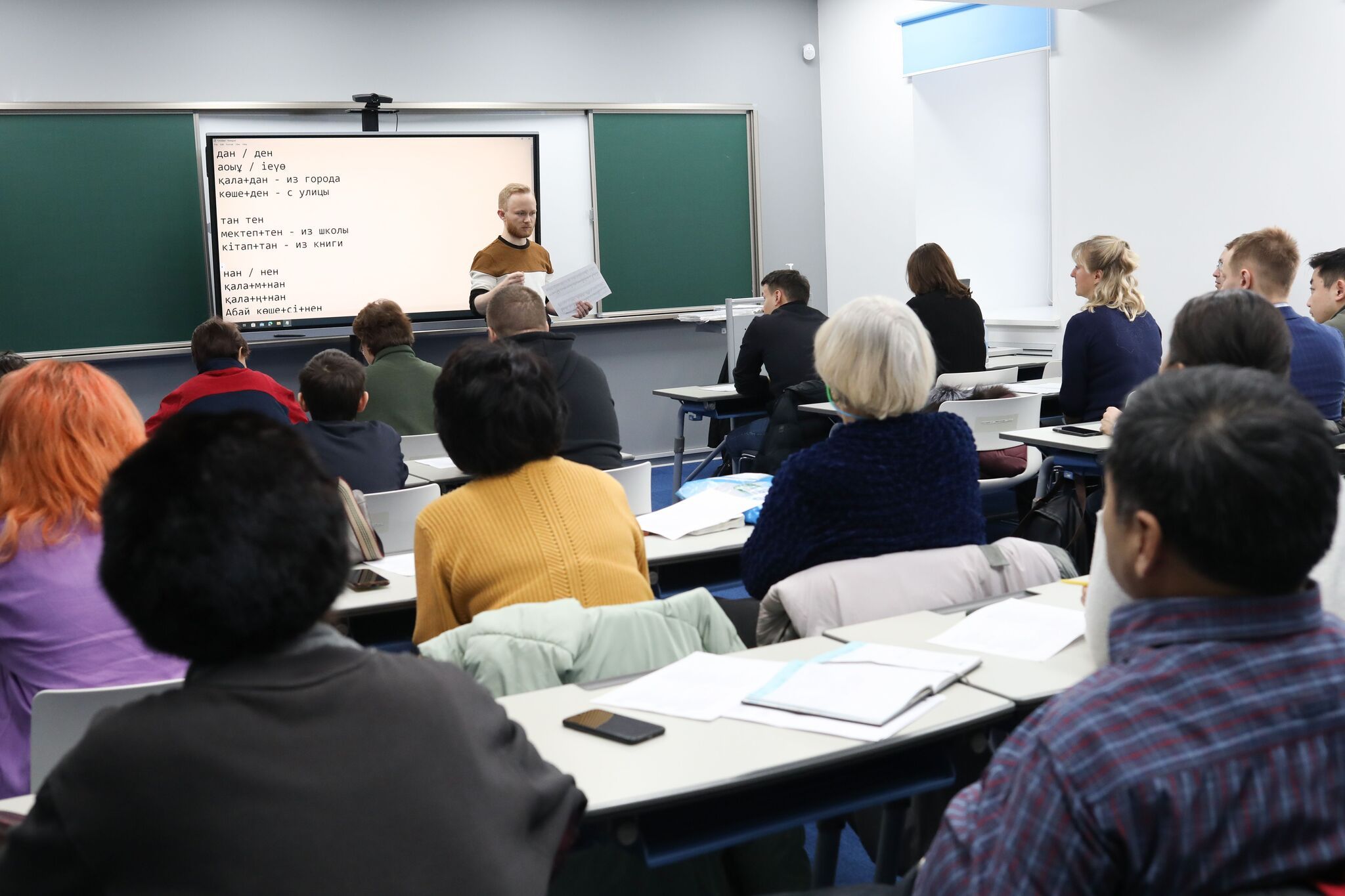 Bent over the doorknob, an ageless lady enters the classroom. She walks slowly with her grandson. In the room, there are already several silently rereading their vocabulary scribbled on a notebook. They would have a thousand reasons to be elsewhere: this Saturday, Almaty woke up without fog, a near-miracle for the economic capital of Kazakhstan. And yet here they are embarked for two hours of Kazakh lessons. For the thirty or so participants, almost all Kazakhs, speaking the language of their country is not self-evident and means having to shut themselves up on a Saturday lunchtime.

In this former Soviet republic, where the Russian language dominates every compartment of daily life, the discussion clubs of the volunteer network Batyl Bol (“Be brave”, in Kazakh) have multiplied in recent months. The war in Ukraine has reignited the fuse of the old linguistic debate that has shaken the country since the dissolution of the Soviet Union in 1991.

Because although Kazakh is the only official language and three-quarters of the population are ethnic Kazakhs, Russian remains dominant in the administration, the political class, the culture and, in general, the language of anyone who hopes earn more than the minimum wage (€139). Kazakh is only a “plus”, especially spoken in rural areas. What create a feeling of downgrading among the inhabitants within their own country.

With the arrival in September of some 300,000 exiles fleeing mobilization in Russia, the language has become a source of almost daily controversy. One took on nationwide proportions in October, when a business leader, Ramil Mukhoryapov, called Kazakhs who refuse to speak Russian “nationalists.” Calls for a boycott and a public apology will follow, before the case falls. The executive maintains ambiguity on the subject.

On the one hand, he reassures: “The use of Kazakh is increasing every year. So there is no reason to worry,” said President Kassym-Jomart Tokayev following this scandal. On the other, this polyglot, in office since 2019, is one of the defenders of Russian. At a summit in October, he suggested the creation of an international organization whose sole mission would be to promote the language of Pushkin, a poet to whom the year 2023 is dedicated in Kazakhstan.

“Russian aggression in Ukraine has added fuel to the fire,” assesses Azamat Junisbai, sociologist, who himself decided to improve his “childish” level of Kazakh. We understood that we had to get away from Russia by all means, or we could find ourselves in the same situation as the Ukrainians. Like them, we have a common border, a Russian minority, a majority Russian language…” The invasion also triggered in Kazakhstan the need to draw up an inventory of Russian colonization, which until now was the prerogative of specialized conferences.

“All the money comes from the Russians”

Educated in a Russian school when she was a child, Suinbike Suleimenova remembers that she used, like her comrades, the word “Mambet”, a pejorative term between “nigger” and “ass-earthy”, to designate the Kazakhs. Years later, these schoolboy jokes seem very ironic to him: this young woman of 29, who has become a filmmaker, is herself a Kazakh, but only speaks Russian.

“This foreign culture was imposed on me,” she says in a furnished room full of video equipment. I never had the opportunity to speak the language of my own people. Worse, we considered her inferior. She has been working since March on the script for her first film, which traces her journey into the Kazakh language. Filming is due to take place next April. She has already found the title: Mambet.

It was when looking for funding that Suinbike Suleimenova felt the full weight of Russian culture. In Kazakhstan, the cinema sector, from independent short films to mainstream comedy, meets once a year before a jury in order to obtain a national subsidy. Suinbike Suleimenova introduced them to Mambet.

“Their only question was: aren’t you afraid that the Russians will end up being segregated in Kazakhstan with this kind of initiative? More recently, the representative of a Kazakh bank had these words, in response to his scholarship application: “You know, all the money here comes from the Russians. Our oligarchs are all in Russia. How do you expect me to support a project like this? »

The bulk of the cultural offer in Kazakhstan has long been aimed at the wealthiest consumers, in this case Russian speakers. But the situation is changing, observes Hélène Thibault, professor at Nazarbayev University in Astana. “Today, 60% of children are educated in Kazakh schools. Twenty years ago it was the opposite, 80% attended Russian schools. »

A perceptible reality by taking a look at the Kazakh “Top 50”, filled with new Kazakh-speaking artists, while Russian electro-pop crushed everything a few months ago. This is the case of Ayau, a young bilingual singer who has chosen Kazakh. “The music industry has long believed that there was nothing good in Kazakh music, while this language is much more colorful,” says this 19-year-old student who wants to become a conductor. With one or two words you can say much more than a sentence in Russian. In the studio of her record company, her manager is rubbing her hands. His hit Sybyrlaiyn is the second most listened to song of 2022 in Kazakhstan.

A historical partner of Russia

From its independence to the fall of the Soviet Union in 1991, Kazakhstan is one of Russia’s closest partners, with which it shares nearly 7,000 kilometers of border, and a considerable part of its economic flows. About 20% of the country’s population is ethnically Russian.

The first president of Kazakhstan, Nursultan Nazarbayev (1991-2019) was at the initiative of the Eurasian Economic Union, an economic and customs agreement which unites several former countries of the USSR. Kazakhstan is also a member of the Collective Security Treaty Organization (CSTO), another regional military organization dominated by Russia.

Worried about the consequences of the invasion of Ukraine, Kazakhstan today seeks to deepen its relations with other powers such as China, Turkey, the European Union and the United States, while maintaining a close dialogue with Russia.

Protests in Bogotá: mobility resumed on Circunvalar avenue after blockades near the District University

Rent a designer dress for a wedding? With their platform, the | Work

Earthquakes in the Middle East: Ottawa grants $10 million in aid

New exit in the Government: Juan Manzur will resign as Chief of Cabinet to campaign in Tucumán

The Russian Justice orders the dissolution of the Helsinki Moscow Group, the oldest human rights NGO in Russia

Animated conspiracy series will not be continued on Netflix