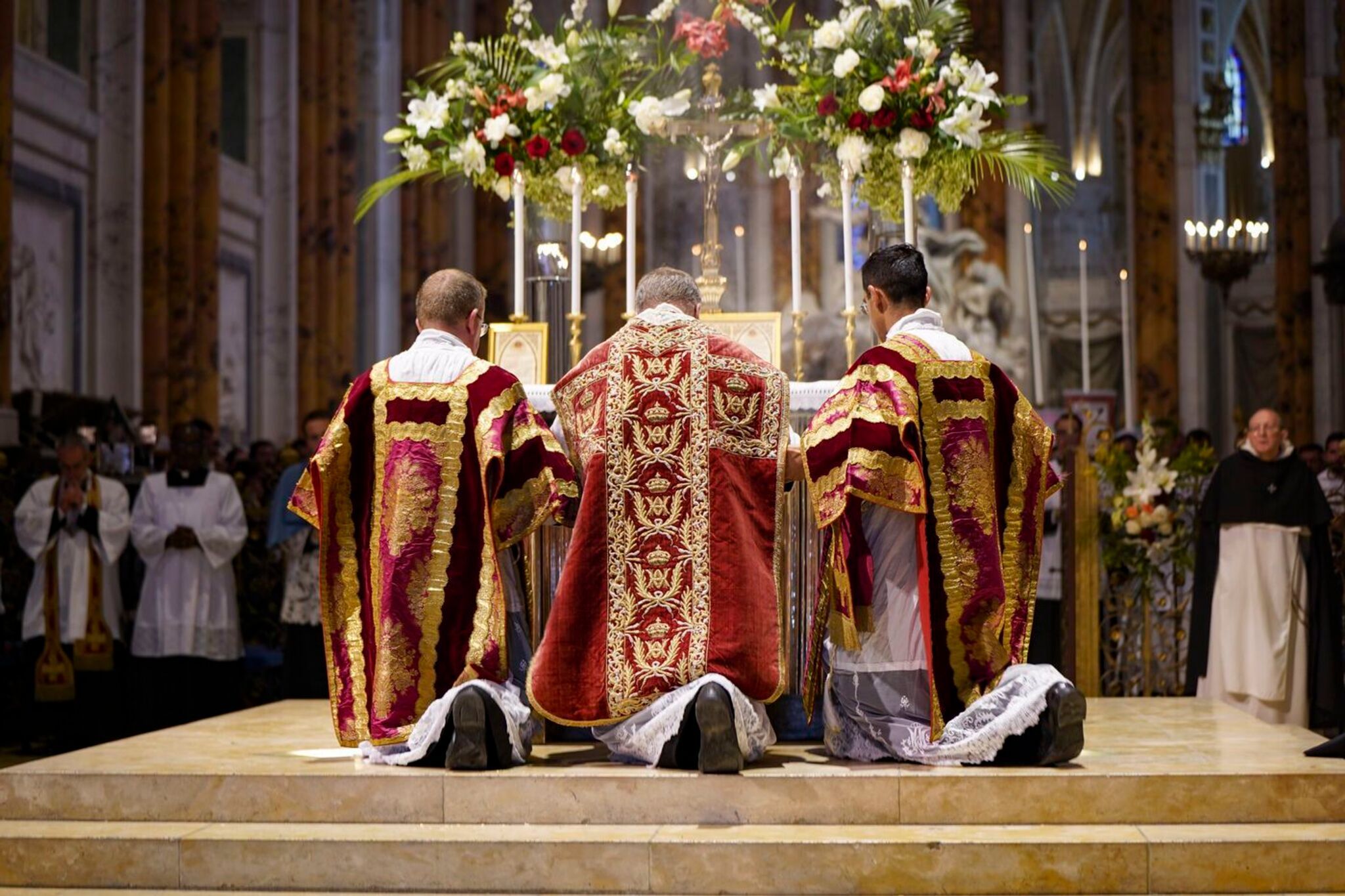 Who are the faithful traditionalists today?

After the Second Vatican Council, Paul VI reformed the liturgy by publishing a new Missal in 1970. Traditionalist Catholics are those who remain attached to the celebration of the Mass according to the Missal which was in force previously, known as the Tridentine Rite, or the Saint Pius V – because promulgated by this pope, in 1570, following the indications of the Council of Trent, or even of John XXIII, the last edition of this Missal having taken place in 1962. Benedict XVI spoke for this Missal of “extraordinary form of the Roman rite”, compared to the “ordinary form” constituted by the Missal of Paul VI.

Historically, “French traditionalism is the oldest to have manifested itself, in particular on the part of lay people”, explains the historian Yves Chiron, author of a reference work on the subject (1). In the wake of the council and the liturgical reform that followed, these lay people attached to the old form of the rite were followed “by a certain number of priests, then by Archbishop Lefebvre at the end of the 1970s”, continues the historian.

Five decades later, “the tradis are still there, each time a little more numerous and with an average age that is still very young”, noted, in a survey published in the summer of 2021 (carried out just before the publication of the motu proprio Traditionis custodes restricting the use of the Missal of 1962), in La Nef. This Catholic monthly close to this sensitivity estimated at around 60,000 in France the number of Catholics having a regular link with the Mass in the pre-conciliar rite (not counting the faithful of the Society of Saint Pius X who are not attached to Rome).

In addition to the regular practitioners in the Missal of John XXIII, the “traditional” world also covers families through schools, scout movements, youth camps or retreats. The pilgrimage of Our Lady of Christianity, from Paris to Chartres, on the weekend of Pentecost, is an illustration of this. This event counted for its 40th edition in 2022 15,000 participants, half of them under 20 years old.

Not all of them attend the Tridentine rite exclusively, some “navigate easily between different sensitivities”, notes Christophe Geffroy, editor-in-chief of La Nef. they didn’t know, he explains. This is why, while being demanding on the liturgy, these young people, who can be described as conservatives, go as much to Mass according to the Missal of Paul VI as of Saint Pius V.

What are the traditionalist communities?

The communities celebrating the Mass according to the Missal of Saint Pius V, in communion with Rome, came under the Pontifical Commission “Ecclesia Dei” until 2019. This was created in 1988, after the schism provoked by Archbishop Lefebvre when he ordained bishops within the Priestly Society of Saint Pius X (FSSPX) without Rome’s approval. With “Ecclesia Dei”, Rome intended to frame the communities that refused to follow Archbishop Lefebvre in his schism, and to continue the dialogue with the SSPX. In 2009, this commission was integrated, while retaining a certain autonomy, into the Congregation for the Doctrine of the Faith (CDF). Since 2019, it is only a section of the CDF.

In France, among the so-called “Ecclesia Dei” communities are societies of apostolic life – some founded by former members of the SSPX – such as the Institute of Christ-Roi Sovereign Priest, the Saint-Philippe-Néri Institute, the Sacerdotal Fraternity of Saint Peter (FSSP, the largest with today 356 priests and 169 seminarians), the Institute of the Good Shepherd, the “missionaries of divine mercy”. There are also monasteries or religious institutes such as the Benedictines of Barroux, Triors or Fontgombault, the canons of Lagrasse, or the Saint-Vincent-Ferrier Fraternity. “Fragmentation is a characteristic of the traditionalist world, whether for institutes or monasteries,” underlines Yves Chiron.

Some, like the priests of the Fraternité Saint-Thomas-Becket, celebrate Mass according to the two forms of the rite, in Latin. At the Fraternité Saint-Pierre, the choice to celebrate occasionally in the new form of the rite is left to the discretion of its members – the refusal of some to concelebrate with the bishop during the Chrism Mass, at least once a year. , being one of the great points of tension because perceived as emblematic of a refusal of communion with the whole Church.

In July 2021, by promulgating the motu proprio Traditionis custodes, Pope Francis very largely restricted the use of the Tridentine liturgy, now making it an exception under the control of the bishop. This text was however followed, in February 2022, by a decree confirming the authorization, for the priests of the Society of Saint Peter, to have recourse to the pre-conciliar liturgical books.

“In France, there is now a kind of status quo, believes Yves Chiron. To my knowledge, no other traditionalist institute than the Fraternité Saint-Pierre has had the right to a decree authorizing it to continue as before. But in fact, that’s what happens. There is no obstacle to priests trained by traditionalist institutes continuing to be ordained. “Traditionis custodes has not, moreover, slowed down entry into the seminary in traditionalist communities. On the contrary, the Fraternity of Saint Peter has more compared to 2021.

What place in the dioceses for the Tridentine liturgy?

The liberalization of the traditional liturgy in 2007, by Benedict XVI, led bishops to entrust the celebration of Masses in the Tridentine rite in their diocese to traditional communities or to ask certain priests to be trained to respond to requests from the faithful. .

With the text of 2021, things have changed somewhat, “but it depends a lot on the countries and the dioceses”, nuances Yves Chiron. “In Paris the number of masses according to the old rite has been reduced, but in Marseilles it has not changed. The AMDG site, which lists the masses celebrated according to the old rite in France, counted 227 places of Sunday celebration in 2022 against 241 in 2021.

What about the Society of Saint Pius X?

Fourteen years after the lifting of the excommunications of the 4 bishops illegitimately ordained by Archbishop Lefebvre, the discussions with Rome for a canonical recognition of the SSPX seem to have stopped. In 2016, however, Pope Francis recognized the validity of absolutions and marriages celebrated by Lefebvrist priests.

Present in some forty countries (162 priories), with more than 600 priests (including a third in France), the SSPX boasted last September of 79 new entries into its seminaries, including 21 in France, in Flavigny-sur-Ozerain. (Golden Coast).

A book. “History of the Traditionalists”

In this reference work, Yves Chiron, historian of the contemporary Church, details the history of Catholic traditionalists who criticized or rejected the Second Vatican Council and the liturgical reform that followed. Widely sourced and documented, this book shows the many chapels with the intertwined stories of traditionalists.

What you must remember. Traditionalist Catholics in France

About 60,000 Catholics in France have a regular connection with the Mass in the pre-conciliar rite (a figure that does not take into account the faithful of the Society of Saint Pius X). In addition to Sunday mass, the “traditional” world also touches families through schools, scout movements, youth camps or retreats.

Among the traditionalist communities are societies of apostolic life, such as the Fraternity of Saint Peter, but also monasteries or religious institutes.

In 2022, after the publication of the motu proprio Traditionis custodes restricting the use of the Tridentine liturgy, now making it an exception under the control of the bishop, there were 227 places in France where the traditional Sunday mass is celebrated, compared to 241 in France. 2021.

Ranking of the most popular Disney+ series in Colombia

Video | Garbage bags are piling up in Utrecht due to strike

The Fed raises rates by 0.25 points

Neanderthals surprisingly cooperated in the hunt for a colossal elephant

Blind lashes out at Ajax: ‘I’m sure it was personal for Schreuder’ | Football

Number of car thefts rises for the first time in nine years, Toyota the most popular | General