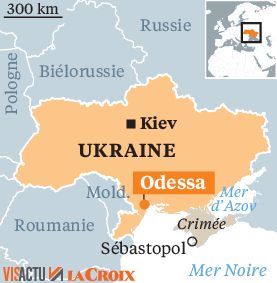 It is a gesture of support for Ukraine and Yemen, hard hit by war, and Lebanon, plunged into a serious economic crisis, by the Intergovernmental Committee for the Protection of the World Cultural and Natural Heritage of Unesco. Meeting in extraordinary session in Paris on January 24 and 25, this committee inscribed on the World Heritage List, and simultaneously on the List of World Heritage in Danger, the sites proposed by these three countries in 2022 to UNESCO for classification. ” emergency “. Such registration represents the highest existing legal protection for a natural or cultural site. The UNESCO World Heritage Convention has been ratified by 194 countries, including the Russian Federation and Saudi Arabia, the first at war with Ukraine, the other with Yemen. Proof of the effect of this protection, among the seven Ukrainian sites already classified as world heritage, none has been bombed since the start of the war, it is argued at Unesco.

Odessa, hit by enemy missiles in July and December 2022, needed such a symbolic shield. The port city, founded in 1794 by Catherine II and developed rapidly in the 19th century, has kept from this period a grid of streets bordered by buildings of eclectic styles and remarkable monuments such as its Opera, the Palais-Royal, without forgetting the Potemkin stairs. It is this historic center, with an area of ​​nearly 240 hectares, which has just been listed as a World Heritage Site. Since the beginning of the war, Unesco has already devoted €200,000 to the protection of monuments in Odessa, to repairs to the Museum of Fine Arts damaged by the bombardments, as well as to the digitization of a thousand works of art and the city’s archives. Second set urgently listed as World Heritage: seven archaeological sites from the ancient kingdom of Sheba (between – 800 and 300 AD), in the governorate of Marib, in Yemen. Covering an area of ​​375 hectares, these remains include the ancient cities of Marib and Sirwah, the temples of Awam and Baran, as well as three monumental dykes.

Currently threatened by war, vandalism and looting, this ensemble calls for urgent protection. It should be noted that this inscription was obtained while the UNESCO committee is chaired by Saudi Arabia, an ally of the Yemeni government. The last complex registered “in urgency” in the world heritage of Unesco is the Rachid Karameh International Fair in Tripoli, in the north of Lebanon, designed from 1962 to 1967 by Oscar Niemeyer and completed in 1975. It is an immense curved and oblong exhibition space, covered with a canopy and flanked, among others, by a theater and a space museum, connected by basins. Due to the aging of the concrete and the lack of financial resources at the national level, its state of conservation is considered “alarming”.

The Wagner group designated as “terrorist” by the House of Commons

An ecological house, a dream within reach

Spain | Murdered with a machete a sacristan in Algeciras

before the launch of new reactors, the government wants to simplify the procedures

These 40+ new movies will be released on Netflix in February