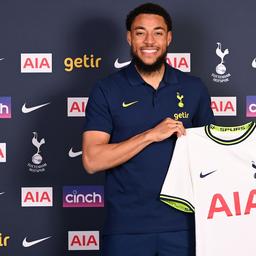 Tottenham Hotspur strengthened itself on Wednesday with Arnaut Danjuma. The Orange-international comes over from Villarreal on a rental basis.

Several Premier League clubs have expressed interest in Danjuma. The 25-year-old attacker seemed to be on his way to Everton, but chose Tottenham after the dismissal of coach Frank Lampard.

For Danjuma, the move to the London club means a return to the Premier League. He played for Bournemouth from 2019 to 2021, after which he was taken over by Villarreal for 23.5 million euros.

In two seasons for Villarreal, Danjuma played 51 official matches, scoring 22 goals. He excelled especially in the Champions League last season. He reached the semi-finals with the Spanish club and became the club’s all-time top scorer in the million ball with six goals.

Danjuma went through the PSV youth academy, after which he moved to NEC in 2016. In 2018, the attacker made the switch to Club Brugge for 2.8 million euros. After a year in Belgium, he moved to Bournemouth for more than 16 million euros.

Already deprived of electricity, the inhabitants of Johannesburg are now without water

In the midst of their crises, Juventus thrashed Salernitana: the crossbar denied Ángel Di María a conquest

Video | Child rescued from Thai well after almost a day

Is the pay-as-you-go pension system in danger?

Drivers of stolen vehicles from France arrested after pursuit in Zeist

Earthquakes in Turkey and Syria: death toll rises to nearly 4,900