Suzanne Schulting concluded the European Short Track Speed ​​Skating Championships in Gdansk, Poland, on Sunday with four gold medals and one silver. She came second in the 1,000 meters and took gold in the women’s relay and in the mixed relay. The men also became champions in the relay, so that Jens van ‘t Wout finished on three gold and two silver.

The 25-year-old Schulting chased her third individual title this European Championship in the 1,000 meters. She took gold in both the 500 meters and 1,500 meters on Saturday.

Schulting was also on his way to victory in the kilometre, but was surprised by Hanne Desmet in the last lap. Schulting seemed to be too busy with compatriot Xandra Velzeboer, so the Belgian grabbed her chance in the last corner.

“Very shit”, Schulting responded to NOS afterwards. “I only go for gold. It was heavy ice, but that should not be an excuse. I thought I had everything under control and was in the right place, but apparently not. Hanne could still get through with speed. I am really disappointed. “

Velzeboer crossed the finish line in third place, but caused the German Anna Seidel to fall during the race. The 22-year-old Dutchman was removed from the result. She was also disqualified in the 500 meters (false start) and 1,500 (irregular push). 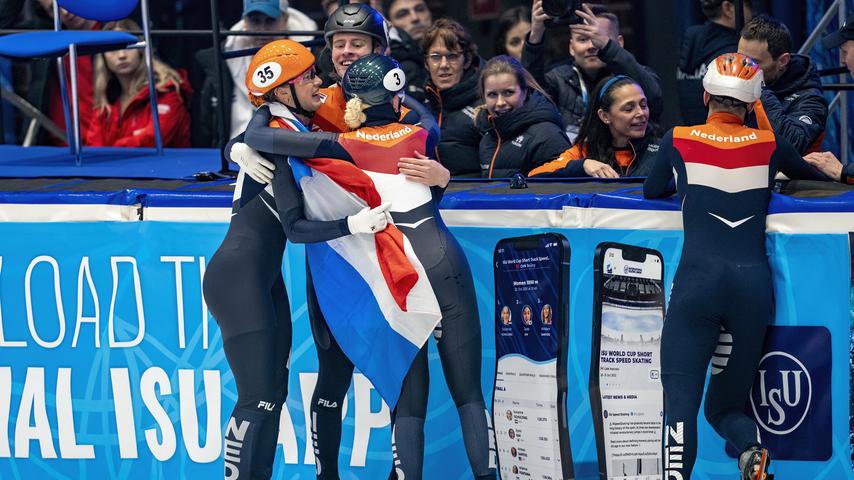 Van ‘t Wout had to overtake the Italian Pietro Sighel in the closing laps. He seemed to have enough with silver, but the Italian went down in the last corner. Van ‘t Wout then narrowly beat Stijn Desmet (Belgium), Hanne’s brother.

In the women’s relay (Schulting, Velzeboer, Selma Poutsma and Yara van Kerkhof), the Dutch won the final convincingly. As a result, Schulting captured her fourth gold this European Championship. For the Dutch women it is the eighth time that they win the European title.

The redemption for the men also resulted in gold for the Netherlands. Friso Emons, De Laat and the Van ‘t Wout brothers benefited from a crash in which competitors Italy, Poland and France lost a lot of time. Jens van ‘t Wout won silver in the individual 1,000 meters for the men. He was overtaken by Desmet in the last lap and was unable to repair the damage.

“It just went perfectly,” said Van ‘t Wout about the kilometer final. He was shocked by a fall behind him. “If I hadn’t been shocked, I think I could have just kept Desmet behind me.”

Earlier this weekend, Van ‘t Wout won gold on an individual basis in the 1,500 meters and silver in the 500 meters. This brings his total this European Championship to three times gold and two times silver.

Sjinkie Knegt was absent in Gdansk. The Frisian grabbed the NK in addition to a European Championship ticket. He still hoped for a point of reference, but did not get it from the KNSB.

Koopmeiners has a share in goals feast Atalanta | Football

France and Germany, condemned to understand each other 60 years after the Élysée treaty