AICM: Fernández Noroña complains about security protocols and they tune him in networks

The devices used to screen passengers at the Mexico City International Airport (AICM) are failing, so security personnel are using “Garrett” brand handheld metal detectors, according to a tweet. of the PT deputy Gerardo Fernández Noroña. At the discretion of the legislator, it would be an “infamous” measure, since it would be typical of the treatment given to alleged criminals.

“In terminal two, I think that in terminal one too, @AICM_mx, the review devices are not working. So they do it with the ‘Garrett’, it’s infamous, they treat you as an alleged criminal. Let’s see how long we tolerate these outrages “, wrote the federal deputy on his social networks. 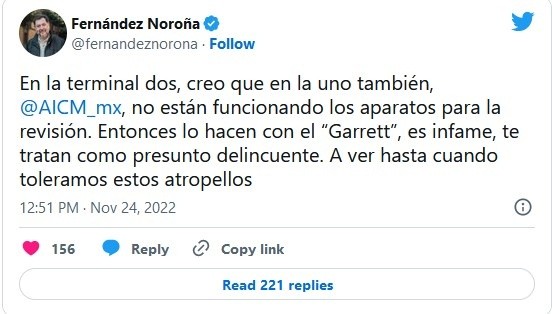 “Well, fly through the AIFA”, they respond to Fernández Noroña

In response to Fernández Noroña’s publication, some Twitter users have considered that the employees of the air terminal are only doing their duty, with comments such as “I don’t blame them, they do their job” and “let them do their job.” . While others have ironized when mentioning the Felipe Ángeles International Airport (AIFA), through opinions such as “Well, fly over the AIFA, that brilliant piece of engineering according to the tenant of the National Palace”, and “go by truck”.