Applications, watches and QR tags help prevent the disappearance of people with dementia

The first time, the metro security agents found him outside the Atocha station in Madrid. When her wife arrived, after more than two hours looking for him, he did not recognize her. On another occasion, he got lost in the corridors of a hospital. More recently, when going to a bank. Now, he is afraid to go out. “If he’s not with me, he doesn’t want to go to the street anymore,” says his wife Asunción (fictitious name) during the session of the support group for relatives with Alzheimer’s. Every Thursday, a dozen patients and their families meet in a room of the Association of Relatives of Alzheimer’s Affected (AFA) in Alcobendas and San Sebastián de los Reyes to share their experiences, doubts and problems and receive support to deal with the effects of this degenerative disease, which affects 800,000 Spaniards. Among the main concerns of family members is that the patient leaves home and does not know how to return.

According to data from the Alzheimer’s Association, six out of ten people with dementia will wander uncontrollably at least once, and many will frequently. And in those moments the risk of disappearances and accidents multiplies. To prevent these people from getting lost and reduce the search time in case they occur, the National Police and the Civil Guard have launched the application Alertcops, which has a function called “Guardian” and allows you to share your location with trusted people. Thus, in case of an emergency, it is easier for them to be located. In case of disappearance, the Police can also follow your itinerary. Until October, according to data provided by the Ministry of the Interior, more than 70,000 citizens have activated the “Guardian”, of which 80% are controlling their position through this function.

To be effective, the person must always carry the mobile. As explained by Luis Miguel Ballestero Blanco, president of the Alzheimer’s Federation of the Community of Madrid (FAFAL), a app as Alertcops it is quite useful in the beginning of the disease. However, when the deterioration progresses, many patients forget how to use their mobile phones and are more likely to forget them at home, for example. “When they are no longer capable of fending for themselves, the solution must be something that goes on their clothes,” suggests Ballestero Blanco.

For a little over a year, the Alcobendas City Council, the local Police and the AFA Alcobendas association have been working together on a project that adapts this technology to different problems. For this, they have two devices free of charge: a geolocator watch that sends the location to family members in real time, and some clothing labels that have a QR code with basic information, such as name, disease, if you have allergies and a emergency phone number. In this way, in case the person gets lost, someone on the street or the police can read the QR code with the mobile camera and thus call the family member. The ultimate goal of these devices is to protect people with cognitive impairment while helping them retain some independence.

On behalf of AFA Alcobendas, they also recommend other devices that are available on the market, such as key rings, medals and necklaces that have GPS. The coordinator of this association, Carmen Barroso, explains that when the degree of deterioration is high, labels are recommended because they cannot be removed and they are not forgotten. 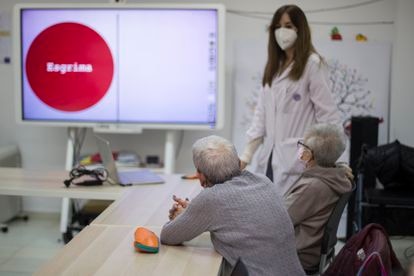 Two people during a support session for those affected by Alzheimer’s. santi burgos

Barroso highlights the importance of these devices, although many families believe that they are not necessary, especially when they are in a mild phase of the disease —depending on the case, it can vary from a few months to years. As he explains, it is in everyday situations, because it is not expected that it can happen, when they take the bad drink. “You go with the person to a shopping center and you have them next to you. You turn around to pay, something has caught your attention and it has disappeared, ”he recounts as an example. Or, in more serious cases, when the person wanders the streets and cannot find their way back.

Concha Gómez-Tejedor, secretary of AFA Alcobendas and representative of the project with the City Council, has experienced the anguish that these situations entail. “All people who have Alzheimer’s, at some point, have an obsession with leaving,” she says. During a vacation a few years ago, her husband was lost for two and a half hours: “We were in a place we didn’t know, we had never been. He spent two hours wandering around and I didn’t know where to look for him or what to do. That’s horrible. At this time there were no such devices.” Since then, Gómez-Tejedor and a daughter of her husband began to look for devices that could prevent so much suffering, such as GPS keyrings and bracelets, and tags with NFC technology, which are used to make mobile payments. “There are some that are very large, others have a very short battery life or the coverage is very bad. You have to find the one that best suits you, depending on the person and the stage of the disease, ”says Gómez-Tejedor when showing the devices that she has already tested. 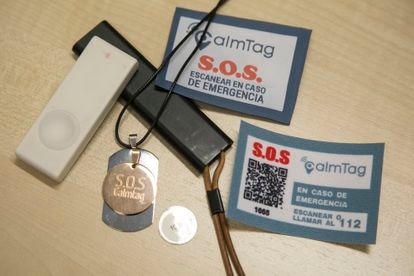 Two devices and a medal with GPS, an NFC sensor (circular) that goes inside the label and a QR sticker with personal information.Santi Burgos

The devices allow patients with cognitive disorders to gain autonomy from their relatives to do daily tasks. In some cases, it is the last alternative to avoid having to transfer them to a nursing home. On the other hand, they evoke a debate on the right to privacy. Would a completely healthy person agree to be tracked by her family member, even with the best of intentions? Probably, most would answer no, and the elderly or sick may feel self-conscious if they know that someone is tracking them.

A study on the ethical implications of using GPS to track people with dementia carried out by Phoebe de Vos, from the University of Utrecht (Netherlands), questioned these aspects and concluded that it is important to prioritize the consent of the person to be tracked. When consulted, Vos affirms that it is a complex debate, which must always be analyzed on a case-by-case basis, especially when it comes to the first phase of Alzheimer’s. “We do not have full access to the patient’s perspective, we do not know to what extent this person is or is not able to decide. It is very difficult to verify it”, says the teacher. According to relatives, it is common for those affected to reject the devices, because they do not understand what it is about or because they do not want it. For their part, the associations are in favor of its use, with or without consent. “The initial problem is serious in this sense, from one day to the next they can be lost,” says the president of FAFAL.

Sven Nyholm, PhD in Philosophy and supervisor of the study, agrees on the importance of consensus and qualifies that families should prioritize dialogue with the patient before adapting any device to their routine. On the other hand, the expert emphasizes that privacy is a very important value, but it is not the only one, and in certain stages of life, it is not even the most substantial. It is necessary to analyze it, in a complementary way to other values, such as health and safety. “If you randomly GPS track a stranger, the breach of privacy is quite different from if you track an elderly relative,” says the specialist in the ethical implications of the technology.

A relevant and little-debated problem, according to Nyholm, is related to the third parties involved, such as the companies that develop and sell the technology. “It’s not just that we monitor our parents and that it’s bad for their privacy. It’s also about who else might be watching, so to speak. Who else could benefit from the information or data that is collected? It is something else to take into account”, explains the professor of the utrecht university and adds that, generally, regulation is a few steps behind the latest technological advances, so families must be cautious when choosing devices.