The moment of the attack on the TyC cameraman

The image is paralyzing. It exposes the police activity: an armed officer crosses a fence, dodges his companions who are on horseback and takes aim. The next sound after the flash is the screams, the confusion and the fall of Fernando Rivero, the cameraman of TyC Sports.

It is one of the many filmic examples left by the violent incidents in the vicinity of the Juan Carmelo Zerillo Stadiumwith a press worker being attacked a few meters away by one of the officers in charge of carrying out the security operation that was prepared for the match between Gimnasia de La Plata and Boca Juniors corresponding to the 23rd date of the Professional League.

“I didn’t realize it because I was recording the repression that the Police was doing with the people. They were shooting a lot of rubber bullets. This boy, who was holding back, turned around and saw me, if he went 5 meters… he saw me and threw me, I doubled over in pain. He shot me bad. It’s not that it was 10 meters away, it was almost next to him,” Rivero himself recounted in TyC Sports about the experience he had.

“I was working, taking pictures of what was happening at the time. I’m not doing anything other than that, my job. This person turned around and saw me, I was next to him. He shot and I ran because the first impacts caused me pain. I crouched down and ran in pain, ”he detailed.

The Uruguayan, as Rivero is known on the channel, clarified that he was assisted by his colleagues but the officer did not try to help him: “Then the boys took me to the cell phone, they gave me some water, because apart from the bullets, the tear gas they were terrible. They gassed like crazy. You couldn’t breathe and there were a lot of sick people. Some guys came from behind, who wanted to enter, and told him: ‘What are you doing, don’t you see that you shot a cameraman?’ But he didn’t flinch, he kept shooting. He crosses me, I look at him, I tell him what you’re doing and he kept shooting forward. There they take me to the mobile”. 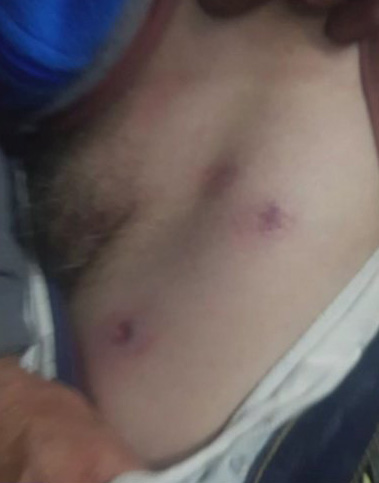 Fernando Rivero was attacked by the Police while doing his job

The cameraman was shot “in the side of the groin” and ended up lying on the floor in pain. Rivero explained that the aggressor police officer had to have identified him as a press worker: “It took me by surprise because the camera is not dark, it has a very powerful light. I have the camera and the light on. I am focusing on the riots, everything I see and everything I can do in my possibilities, because I have to cover myself from the stones and some bullets that rubbed around. I’m struck by how he jumps, automatically jumps up and shoots me.”

“I’m still a little shaken with what happened. I was doing the job as I usually do, when there are riots I grab the camera and record the incidents. I was close to the horses, they started throwing stones at the horse police and I ran to protect myself from the stones. I stand on a tree, this person jumps the fence and comes directly as if to shoot me and throw me, so that I would not continue recording the events. That seemed to me the intention of the guy, to get me out of the scene so that I would not continue recording, ”he reflected.

A few hours after the violent event – ​​which determined the suspension of the game in La Plata 9 minutes into the first half – the unfortunate news of the death of César Regueiro, a 56-year-old fan, due to cardiac arrest, was known.

Immediately after what happened, Sergio Berni, Minister of Security of the Province of Buenos Aires, spoke in TyC Sports Regarding the attack on the press worker: “Cameraman or not, no police officer can shoot, even if it is rubber ammunition, directly at the body. So camera or no camera, he has a criminal liability to answer for.”

“I was up to 12 looking for families of missing minors”: the story of the voice of the Gimnasia de La Plata stadiumGimnasia assured that there was no overselling of tickets: “Investigate until those responsible for this tragic day are known”A fan of 56 years died of a heart attack in La Plata after serious incidents in the match between Gimnasia and Boca