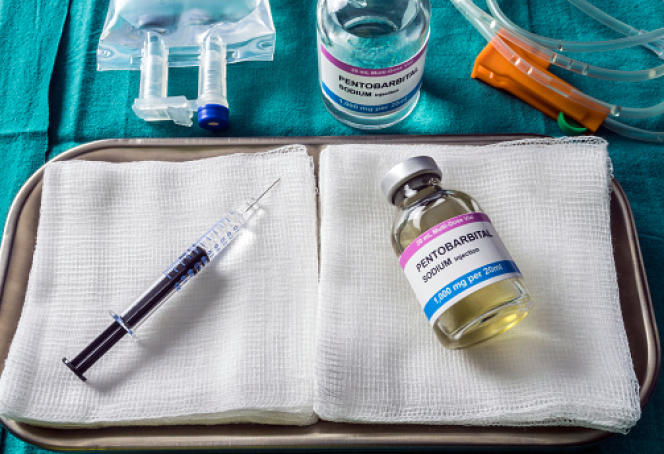 A lethal injection and vial with pentobarbital used in a hospital. DIGICOMPHOTO/ISTOCKPHOTO/GETTY IMAGES

His name will have to be added to the list of 32 victims of the Islamist attacks committed in 2016 in Brussels, at the Maelbeek metro and at Zaventem airport. The student was in the latter place, waiting for a plane to Rome on March 22. A few meters from one of the two suicide bombers who detonated high-powered bombs. Miraculously, Shanti De Corte, 17 at the time, was not injured but she never recovered from her post-traumatic syndrome. The young woman, constantly immersed in great suffering and supported by her family and friends, decided to request euthanasia in April. This was performed on May 7, but revealed only a few days ago.

Shanti De Corte’s mental pain was deemed unbearable and incurable by a college of doctors and psychiatrists, which made the act possible in the eyes of Belgian law. An investigation opened by the Antwerp public prosecutor’s office concluded that the rules had been respected. On Facebook, the young Fleming left an epitaph evoking her “departure in peace” and concluded with these words: “Know that I miss you already”.

We will therefore not hear the testimony of Shanti De Corte at the trial of the alleged perpetrators of the double attack in Brussels – and she had neither the desire nor the courage to come – while the hearings will finally begin on November 14. Initially set for October 10, they had to be postponed because, among other things, of a controversy over the conditions for the appearance of the ten accused. After a bronca from the defense lawyers, the president of the assize court had ordered the dismantling of individual boxes, closed and glazed, in which Salah Abdeslam and his associates were to be found.

Read also: Article reserved for our subscribers The trial of the Brussels attacks is postponed

“A ghost who no longer feels anything”

The defendants will be confronted with the testimonies of some 370 people who tried to overcome the shock of the attacks. Shanti De Corte, an orthopedic student, did not succeed despite the support of members of her circle, five friends and her parents. She told them about her sleepless nights, her panic attacks at the sound of an ambulance in the street, her depression. Described as fragile before the attacks, his condition continued to worsen over stays in psychiatric units, treatment with antidepressants and a suicide attempt. Testifying in the press, she wanted, for a moment, to appear as an example of the possible resilience of the victims but she did not succeed, describing herself as “a ghost who no longer feels anything”.

You have 48.52% of this article left to read. The following is for subscribers only.