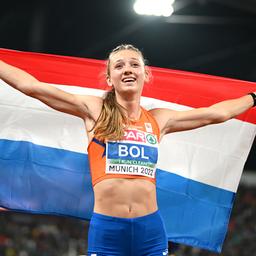 Femke Bol is one of the last three contenders for the European athlete of the year prize. This is apparent from the shortlist that was announced on Friday by the athletics federation.

The 22-year-old Bol will compete in the election against the Belgian heptathlon star Nafissatou Thiam and the Ukrainian high jumper Yaroslava Mahuchich. They were already on a shortlist of ten names in mid-September, after which the public, affiliated federations, media and experts could vote.

The winner will be announced on October 22 during the Golden Track awards in Tallinn, Estonia. Sifan Hassan received the award last year after her two gold medals at the Tokyo Olympics.