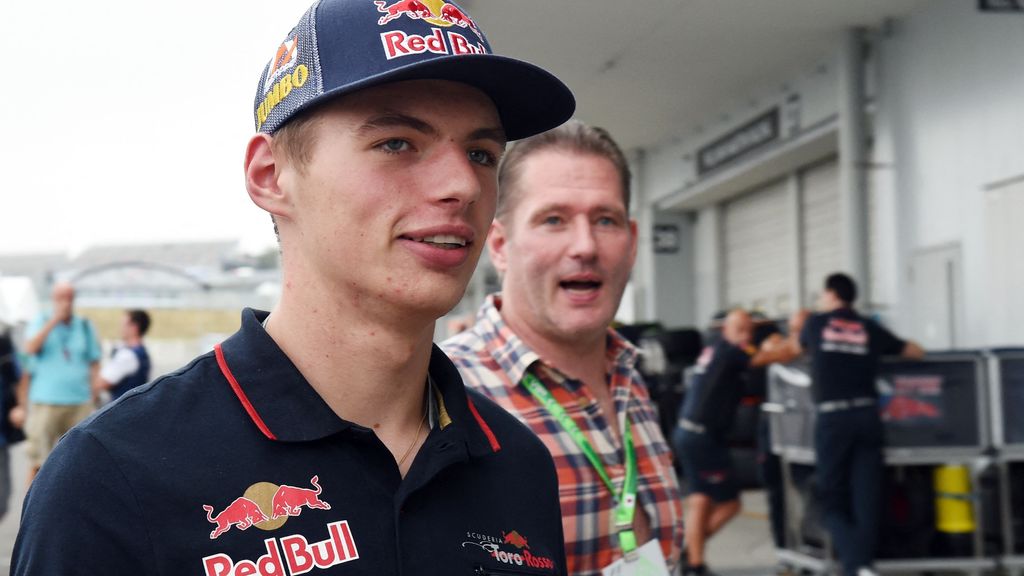 Eight years after his first laps on the Suzuka circuit, Max Verstappen realizes that a lot has changed. And that he has changed with it, into the reigning Formula 1 world champion that he is today.

“Here I learned the basics of a Formula 1 weekend. The years after it was mainly a matter of gaining experience. Making progress. All the good and bad moments make you a better driver. I am a very different driver now than in 2014 It’s all a lot easier now.”

Title prolongation on Suzuka is a wonderful scenario for 25-year-old Verstappen for several reasons.

The Japanese Grand Prix starts on Sunday at 7 a.m. Dutch time and can be followed live on NPO Radio 1 and via a live blog on NOS.nl and in the NOS app.

A summary with Jan Lammers’ analysis can be seen from 6.10 pm on NPO 1, NOS.nl and in the NOS app.

He already said it in the run-up to the Singapore Grand Prix, where he also had a small chance of the title. “Being world champion in Japan is more fun and special. It’s in my hands there and it would be really nice to celebrate the title party with all the people from Honda.”

“I’m going to do everything I can to give Honda a nice weekend. Rain is on the way, so I’m taking into account an unpredictable and exciting weekend,” said Verstappen at Suzuka. “We missed this circuit because of covid. It is a shame that we were not here during the title fight with Mercedes and Lewis Hamilton last year.” 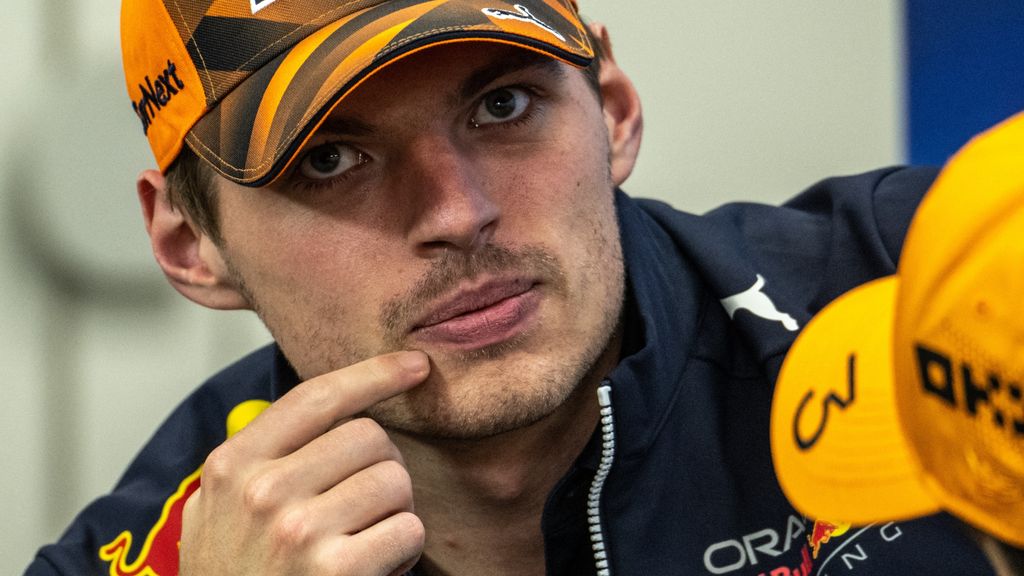 Max Verstappen during the press conference in Suzuka

Suzuka is a track that suits him. He has been on the podium here three times, but never as a winner.

“I love this track. There are some nice fast, flowing corners here. The fans are great too. The Japanese are all Formula 1 crazy. You see a lot of special gear here. I mean people with a DRS rear wing on their head you don’t see it everywhere.”

It was pretty tough and I was shocked by the power of an F1 car on the first lap. I only had a year of experience with racing cars, just got out of karts, so to speak.

“There are many great memories here,” continues the World Cup leader on the circuit where his F1 career began in 2014 with his first official Friday training for Toro Rosso racing stable. “I remember that well, although it has been quite a while now.”

“It was pretty tough and I was shocked by the power of an F1 car on the first lap. I only had a year of experience with racing cars, so to speak, just came out of the karts. Then Suzuka is not really the one most obvious circuit to make your first meters, but it was a very nice weekend.” 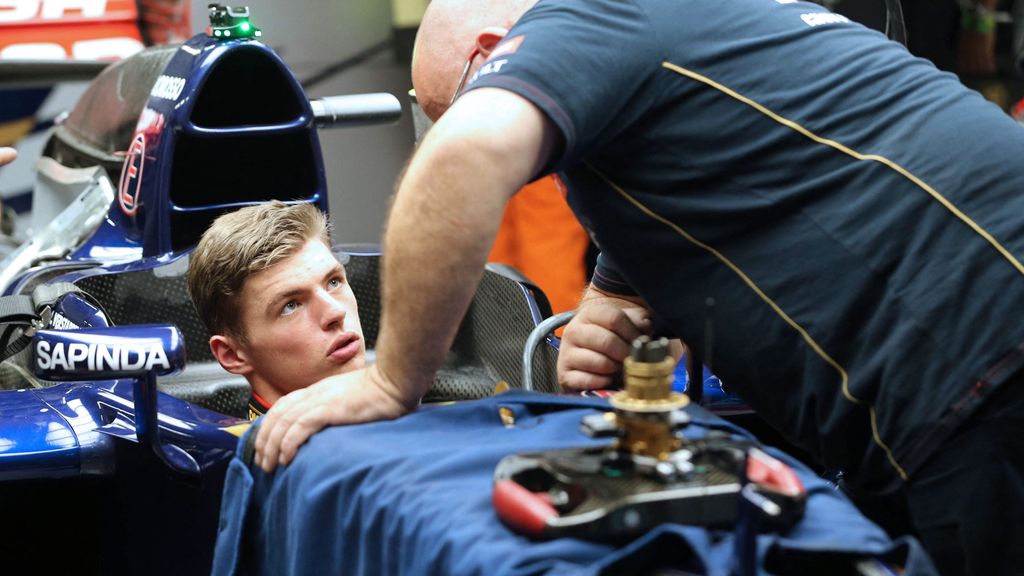 A 17-year-old Max Verstappen listens carefully to the directions

Verstappen’s RB18 looks slightly different than before. For the first time, the logo of the Japanese power source builder is again on the Red Bulls. For the time being, this is mainly symbolic. A kind of tribute.

Honda suddenly withdrew from Formula 1 last year. Verstappen’s racing stable now maintains and prepares the engines itself and employs former Honda personnel. “Not much has actually changed,” Verstappen says. “It’s great that Honda is once again prominent on the car in its home race.”

According to him, we should not draw many conclusions, not even now that the negotiations between Red Bull Racing and Porsche have finally foundered. “It would be nice if Honda wants to return, but it’s too early to say anything about that. Who knows what will happen, but it’s not up to me.”

Verstappen says he hardly thinks about the approaching denouement. “I’m in no hurry.”

It looks very simple on paper. If Max Verstappen wins the Japanese Grand Prix and sets the fastest lap during the race, title renewal is a fact. The 25-year-old Red Bull driver has to score eight World Cup points more than Ferrari rival Charles Leclerc on the Suzuka circuit.

In the slider below the scenarios where Max Verstappen already takes the world title on Sunday: 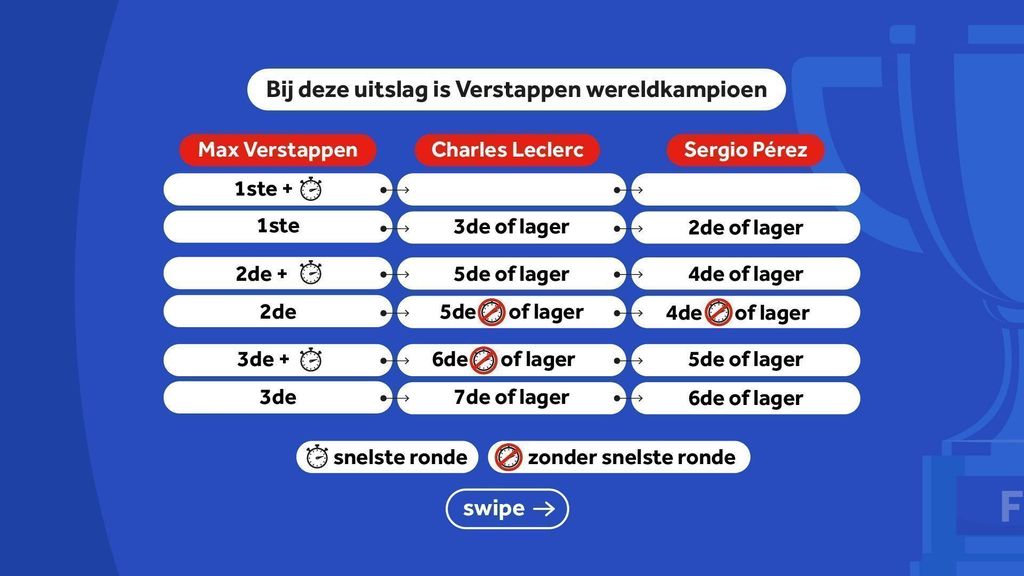 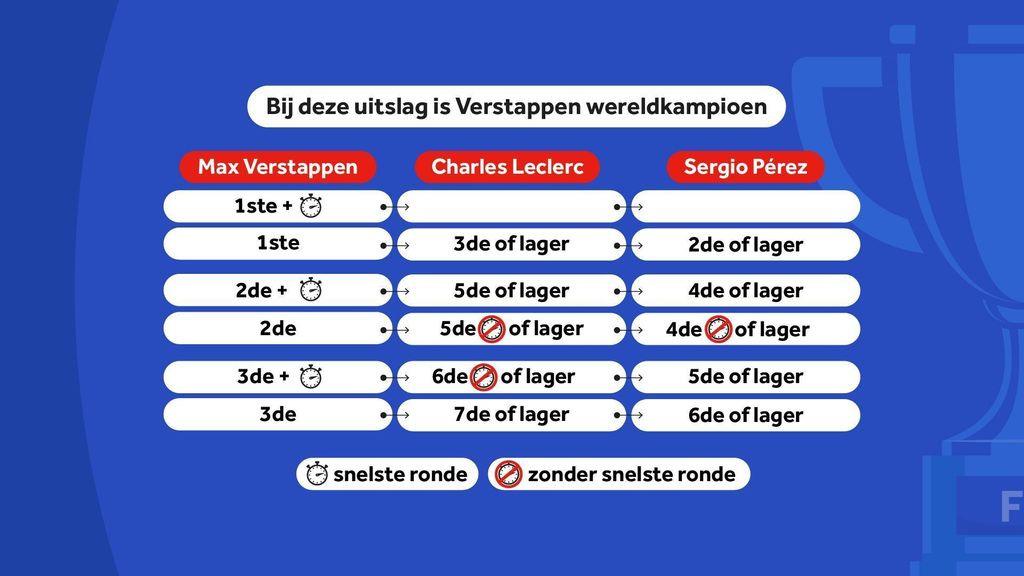 In these scenarios, a Max Verstappen world championship is possible

The omens are not good for Charles Leclerc, who has never been on the podium in Suzuka. The Monegask fears that Verstappen and teammate Sergio Perez in Japan is a size too big for Ferrari.

“I expect Max to take the title here. Red Bull will be very strong here. On this track you use a setup very similar to Spa-Francorchamps and we remember how fast they were there.” Verstappen started in the Belgian grand prix due to a grid penalty in the rear, but drove an unprecedented catch-up race and declassified the entire field.

A big contrast to the recent wet night race in Singapore. Verstappen’s first attempt at title prolongation was shattered there by various misses from his usually so meticulously operating racing stable. “Singapore was a mess”, Verstappen looks back. “Very bad. A textbook example of a race weekend you don’t want to experience.”

“Did we discuss as a team what went wrong? Yes, of course. But that wasn’t rocket science. It’s quite simple: if you don’t put enough fuel in the car for six laps, it will stop after five laps. you don’t have hours to talk about.”

Verstappen and Red Bull have something to put right. “Then we have to put in a perfect race weekend. Fortunately, we have often done that. We know how to do it.”