Yrma Lydya: Who was the singer murdered by her husband, Jesús Hernández, in Mexico City?

On June 23, the singer Yrma Lydyaonly 21 years old, was murdered by her husband, Jesus Hernandezinside a restaurant in the Mexico City while they argued.

Her 79-year-old husband was linked to the process and had been ordered a precautionary measure of preventive detention in the North Prison.

During the month of September, Jesús Hernández began to feel bad, so he was treated at the hospital for a medical check-up. After determining that it was blood pressure, the defendant was returned to his cell.

This past Tuesday, October 4, the death of the lawyer was reported, which according to the report was death due to age.

Her husband would have shot the young woman three times inside the Suntory restaurant, located on the corner of Torres Adalid and Avenida Magdalena, Del Valle Norte neighborhood.

Immediately at that time, through their Facebook profile, the group Los Herederos del Bolero recalled the last song that Yrma performed and published a video in which they played a song with her. sang the song of “Mucho Corazón” by the Mexican composer Ema Elena Valdelamar. 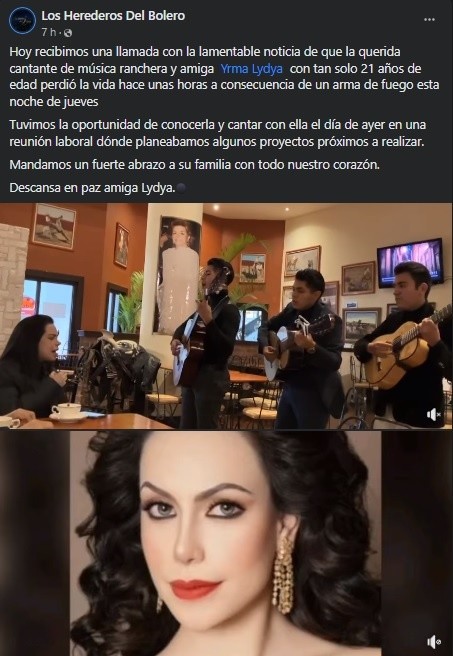 “Today we received a call with the unfortunate news that the beloved ranchera music singer and friend Yrma Lydya, who is only 21 years old he lost his life a few hours ago as a result of a firearm this Thursday night“, they wrote.

“We had the opportunity to meet her and sing with her yesterday at a work meeting where we were planning some upcoming projects to be carried out. We send a big hug to your family with all our hearts. Rest in peace friend Lydya”, spread the group.

Cereal participated in the show GranDiosas, which brings together several of the greatest singers of the ranchero, banda, norteño and mariachi genres. The interpreter offered a tour this year as guest artist Angélica Carrasco, María del Sol, Dulce, María Conchita, Alicia Villareal, Karina and Janette.

She was the daughter of Carlos Quiñoneswho was one of the most influential businessmen in Mexico.

On television, Yrma participated in programs such as Fiesta Mexicana de Las Estrellas in 2015, 2018 and 2019; she also in Matutino Express, Music Made in Mexico and Bandamax, among others.

The singer was recognized by the Senate of the Republic and the Chamber of Deputies with the National Prize for Culture and with the Doctorate Honoris Causa for her contributions to culture and her own merits.

Yrma Lydya was 22 years old. She was a Mexican music singer.

Tonight she was murdered in the Del Valle neighborhood by her partner, a 79-year-old man.

In 2019, he received the National Prize for Culture awarded by the Senate.

May your case find justice. pic.twitter.com/aMuyamzPOq

Presumably because of an argument, the lawyer murdered his wife with several shots from a firearm, for which he was arrested.

The events occurred on the night of Thursday, June 23, in a private section of the Suntory restaurant, in which, after an alleged discussion, the alleged feminicide triggered a firearm.

PBI personnel carried out security actions in the area and were alerted by the guests of an establishment, of a report of detonations inside the site, so, with the precautions of the case, They moved to the point.

Arriving, requested medical services for the woman who was injured; Paramedics who arrived at the site diagnosed her with no vital signs due to gunshot wounds.

The officers arrested the probable aggressor, a 79-year-old man, identified as the woman’s husband, when he tried to flee aboard a vehicle, who was reported their legal rights and transferred to the agent of the Public Ministrywho will define their legal situation and carry out the investigations of the case.

They also arrested his escort and driver, who helped the subject to leave the place.