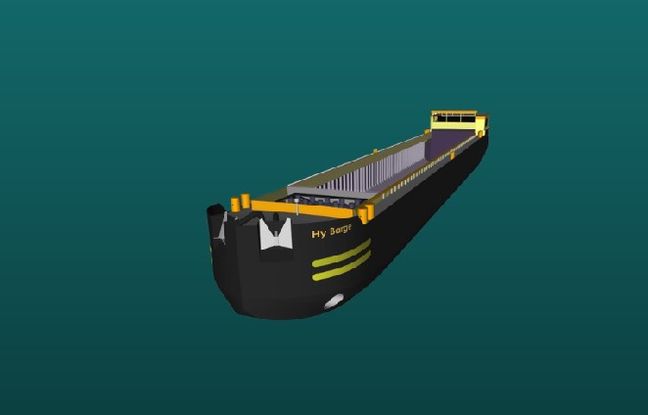 Three hundred tonnes of goods, “the equivalent of a dozen trucks”, gliding silently on the green waters of the Canal des deux mers rather than blocking the roads. That’s the promise of the HyBarge, a hydrogen-powered freshwater boat. For several years, it has occupied the thoughts of Jean-Marc Samuel, bargeman, and boss of the river freight company L’Equipage, based in Ramonville, near Toulouse. Including when he is at the helm of La Tourmente, his transport barge, which unfortunately currently runs on expensive diesel.

Surrounded by two specialized research firms, the fervent defender of water transport modeled a large barge equipped with “a new propulsion chain”: electric motors powered by a fuel cell, itself activated by hydrogen “compressed in bottles”.

Capable of navigating 60% of the river area

It is a “self-propelled Freycinet gauge”, these locks are 40 meters wide. “So capable of navigating on 60% of the French river network”, insists Jean-Marc Samuel. Even if it will only be able to do so on the famous Canal du Midi as far as the Sanglier lock, about thirty kilometers south-east of Toulouse. But the bargeman is rather aiming for the North, the Canal de Garonne between Toulouse and Montech, a logistics axis heavily used by trucks.

And he does not dream alone in his corner. Voies navigables de France (VNF), the operator of French canals and Ademe (the ecological transition agency) have allocated funds for studies on the HyBarge. Jean-François Portarrieu, related deputy Horizons du Nord Toulousain, also allowed himself to be taken on board. In August, through a written question, which has not yet received an answer, he wished to draw the government’s attention to “these future barges powered by hydrogen”. He even proposes a very down-to-earth experiment: “These new green hydrogen barges could, he writes, be used to transport certain materials from the many gravel pits in northern Toulouse (…). A use that could be extended to the removal of rubble from the metro site, offering an alternative solution to road transport”.

The HyBarge has an appointment in Paris

Tisséo is indeed looking for “innovative” solutions to evacuate and recover the 2.8 million cubic meters of earth that must be excavated to build the 3rd metro line; but on the river option, Jean-Michel Lattes, the president of Tisséo, is skeptical. “It has to be efficient and fast. However, the speed on the Canal is limited, he indicates to 20 Minutes. We would be delighted if there was a technical possibility to develop the hydrogen barge, but at the moment we have no assurance”.

“It would be interesting to compare the costs with trucks in terms of pollution and road congestion,” says Jean-Marc Samuel. He completes the “risk studies” and is preparing to find a shipyard to build the first prototype and present an operational HyBarge “in 2024”. He also intends to catch the eye of Clément Beaune, the Minister of Transport, this Thursday in Paris where VNF is organizing the “Vert le fluvial” symposium to accelerate the decarbonization of river transport, particularly in view of the Paris 2024 Olympics. ” I hope he will stop at my stand,” says the bargeman.