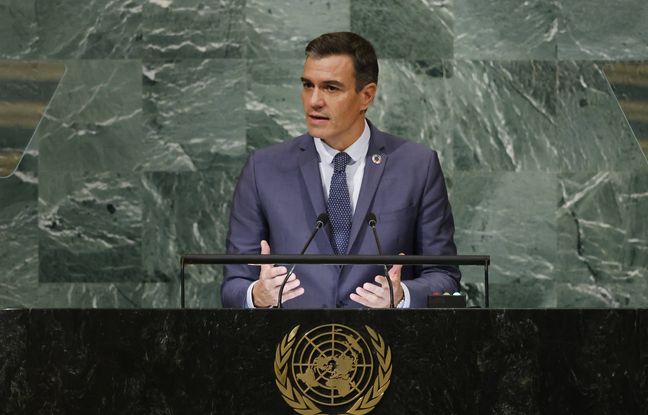 Exhumation of the disappeared, cancellation of political convictions: nearly half a century after the death of dictator Franco, the Spanish left-wing government had Parliament adopt its flagship text on Wednesday aimed at ending the “silence of the vanquished” of the Civil war.

Coming to power in 2018, Socialist Prime Minister Pedro Sanchez made the rehabilitation of the victims of this conflict (1936-1939) – often described as a prelude to the Second World War – and those of the dictatorship set up by its winner , General Francisco Franco, until his death in 1975, one of his main priorities.

But this law of “democratic memory” divides in a country where the wounds of the past have not been healed and where the right, which has promised its repeal if it returns to power next year, accuses the left of rekindling them.

“History cannot be built on the basis of the oblivion and silence of the vanquished” of the Civil War, says this text in the preamble. It was definitively adopted by the Senate with 128 votes for, 113 against and 18 abstentions, after being voted on at first reading by the Chamber of Deputies in mid-July.

“Today we take another step towards justice, reparation and dignity for all victims #LaMémoireCestLaDémocratie,” Sanchez tweeted shortly after the vote.

With the adoption of this law, the search for missing victims of the Civil War and the dictatorship will for the first time become a “responsibility of the State”, which will directly finance the excavations and exhumations. A DNA bank of the victims will be created in order to facilitate their identification while a map of all the mass graves in the country will be drawn up.

“The state must exhume the bodies of the victims of the Franco dictatorship (…) There are still 114,000 enforced disappearances in Spain”, that is to say people whose fate has been deliberately concealed, Sanchez said in July . Spain is “the country in the world with the most missing (…) after Cambodia”, bruised by the abuses of the Khmer Rouge, he said.

Those who disappeared from the Civil War are overwhelmingly Republicans, the Franco regime having exhumed many victims from the nationalist camp from mass graves, to give them a burial.

Until now, the searches were mainly due to associations of relatives of the victims – as shown by Pedro Almodovar in his film Madres Paralelas – which had been denounced in 2014 by the UN Human Rights Council who had criticized, in a report, the “shortcomings” and “the indifference of state institutions”.

Sanchez’s predecessor, the conservative Mariano Rajoy, in power from 2011 to 2018, boasted of not having spent a euro of public money in the application of a first law of “historical memory”, adopted in 2007 under a previous socialist government.

Beyond the search for the missing, the law adopted on Wednesday provides for the cancellation of the summary convictions pronounced by the justice of the Franco regime and recognizes for the first time as victims of Francoism the babies “stolen” by the regime from the families of Republicans.

A prosecutor’s office dedicated to investigating human rights violations committed during the Civil War and the dictatorship will also be created. So far, the Amnesty Act of 1977 has prevented any prosecution in the name of transition to democracy.

For the ARMH (Association for the Recovery of Historical Memory), one of the main groups defending the memory of Republican victims of the civil war, this law “perpetuates immunity for the Francoists and the denial of the rights of victims” because it “maintains the law of amnesty” and that it “does not judge” nor “compensate” anyone.

After the exhumation in 2019 of Franco from his monumental mausoleum located near Madrid, this law constitutes the second highlight of the government on the Civil War and the dictatorship. After months of legal battle between the executive and his descendants, the remains of the “Caudillo” had been transferred to a more discreet cemetery in the north of Madrid so that his mausoleum in the “Valle de los Caidos” could no longer be a place of apology for Francoism.