epidemiologists from different parts of the world are on alert before a flu variantthe H3N2 strain, which is “life-threatening” and is in worldwide circulation.

was identified for the first time in pigs of the United States in 2010 and since then there have been sporadic infections in humans.

The viruses that normally circulate among pigs are “swine influenza viruses”. When these viruses infect humansthey are called “variants” of the virus.

What is the H3N2 strain?

H3N2 or H3N2v is a variant or non-human influenza virus strain that normally circulates among pigs. It was first identified in pigs in the United States in 2010 but in cases of infected humans have been reported in recent months by this virus; some of them have died from complications from the disease.

During 2011, 12 human infections were detected with H3N2 and in 2012 there were multiple outbreaks of the virus that resulted in 309 reported cases.

In 2021 and 2022, they have been detected human cases in the United States, Peru, Australia, and even in Mexico.

How is it spread?

According to the US Centers for Disease Prevention, the influenza virus can be transmitted from pigs to people and from people to pigs from the same way in what seasonal influenza viruses spread from person to personmainly through infected droplets.

When a sick pig you cough or sneeze and these droplets land in your nose or mouth o se inhalantthere is risk of contagion.
Another form of infection is touching something contaminated with the virus and then touch the mouth or nose.

What are the symptoms?

Symptoms of H3N2 infection are similar to those of seasonal influenza viruses and may include:

Alejandro Macías, from the National System of Researchers (SNI), and who was commissioner against influenza in Mexico in 2009noted that the strain “is a public health threat, in addition to COVID this winter.” 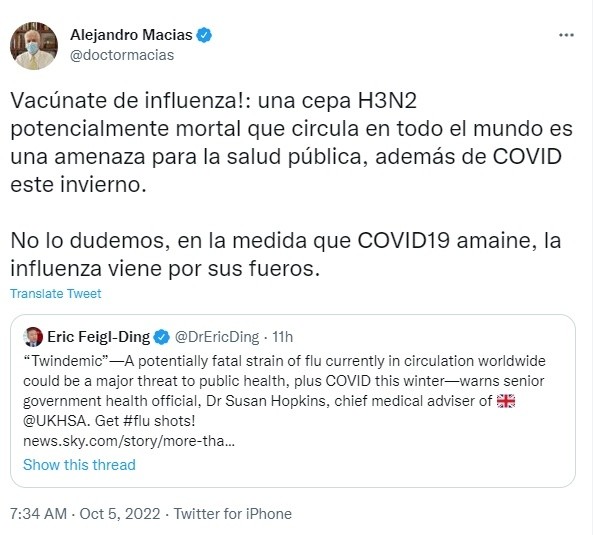 How can I take care of myself?

This strain becomes a latent threat for the approaching winter season, along with the new wave of Covid-19 cases and seasonal respiratory diseases that are expected

The campaign starts on Monday October 3 and ends March 31, 2023. In December, 70% of the population must be vaccinated and 100% by the end of the campaign and it is expected that during this campaign 33,682,400 people in Mexico receive the biological.

The entire population can apply this biological and it is of the utmost importance that people 60 years or older, children from 6 months to 5 years, health personnel, pregnant women y personas with comorbidities like heart diseases o pulmonary; diabetes mellitus out of control; morbid obesity; renal insufficiency; cardiovascular diseases (with the exception of essential arterial hypertension); cancer y people with HIV/AIDSthey do it.

Where will the vaccines be applied in Jalisco?

Vaccines are given in Units of the Mexican Social Security Institute (IMSS), Institute of Security and Social Services for Workers (ISSSTE) and OPD health centers Jalisco Health Services; the campaign ends on March 31, 2023.