The Norwegian striker opened the account at the Etihad Stadium. (Video: Fox Sports 2)

Manchester City from England faced Copenhagen from Denmark as a local in a duel valid for date 3 of group G of the UEFA Champions League. In the previous one, the homeowners positioned themselves as the clear favorites to win, so it didn’t take long to show it on the field. And it is that they took center stage with the ball and appealed to the constant rotation of it and its players to generate damage in the rival. In this way came the opening goal, as Erling Haaland was able to open the account with a right hand after a spectacular collective play.

This action happened just seven minutes into the first half. Those led by Pep Guardiola had the Danes stuck in their field and with little chance of generating a counterattack. In that sense, Ruben Dias started a play from the defensive line and played with Riyad Mahrez. The Algerian, unable to prosper on the right wing, gave it back to the Portuguese, who opened with Phil Foden. The English midfielder played with Jack Grealish, who tried to dribble past his marker from the left sector, but he couldn’t either and combined with Foden.

The ball ended up at the feet of Joao Cancelo, who appealed to unload with Mahrez. The African attacker took a cross, but it was cleared by the defense of Copenhagen. After a few more passes from the rear, the right-back himself ‘art’ He had the opportunity and the space to start down his wing and get a low center, until the Norwegian giant appeared to score 1-0.

With this entry, Erling Haaland has been present on the scoreboard between the Premier League and the Champions League for nine games. It all started with the match against Newcastle United, when he scored one in the 3-3 draw. He then he dialed a ‘hat-trick’ in a tight 4-3 win over Crystal Palace. He also scored three goals against Nottingham Forest. His next victim was Aston Villa with a goal in the 1-1 draw, followed by the 4-0 win over Sevilla with a brace of his and another goal against Borussia Dortmund, his former team. Against Wolverhampton he scored a goal in a 3-0 win and then shone with a hat-trick against Manchester United on the final day of the English championship. 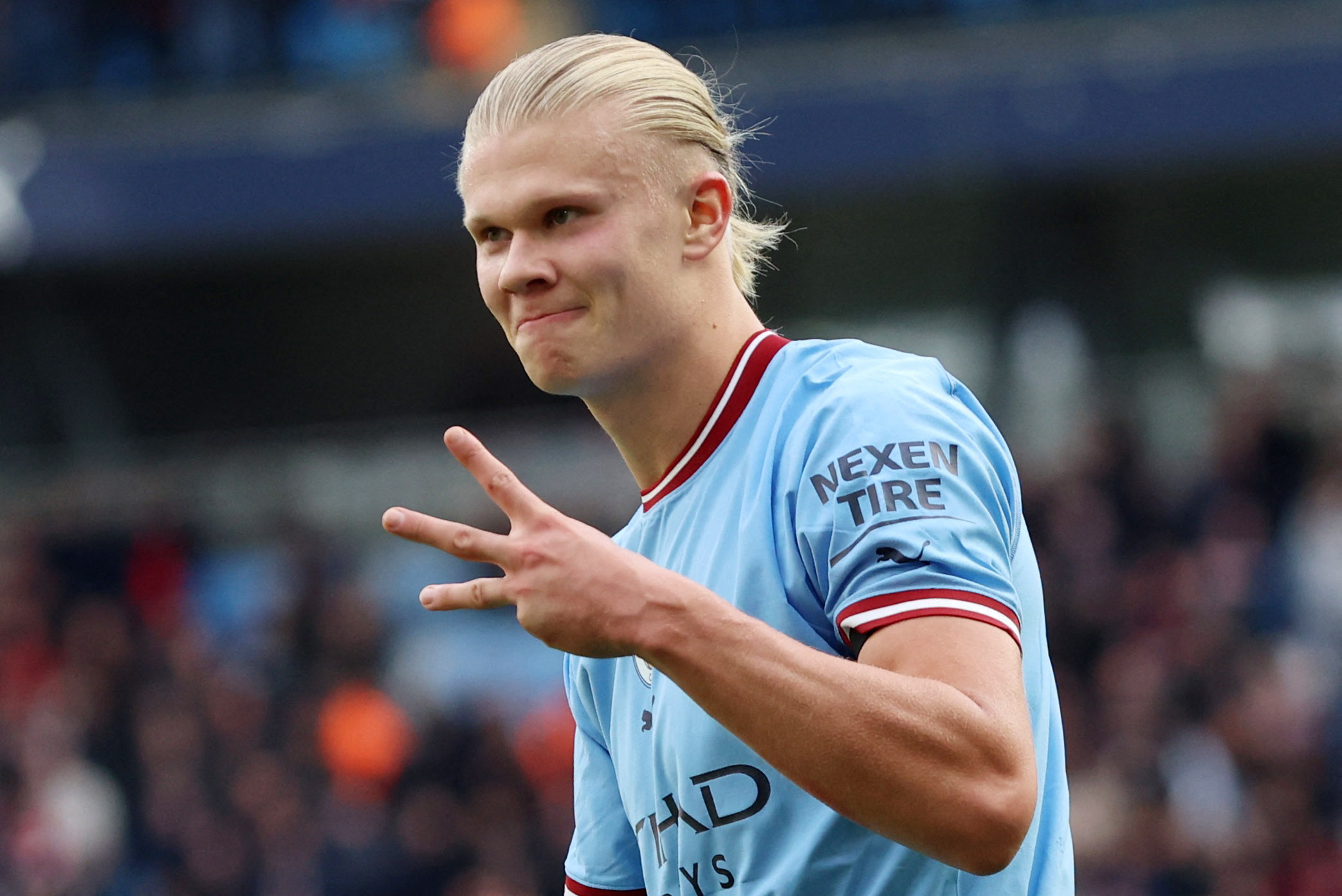 Erling Haaland making the gesture of the three goals he scored in Manchester City vs Manchester United. REUTERS

So far in the 2022/2023 season, Erling Haaland is the top scorer in the Premier League with 14 goals. Really impressive figures, since they surpass by a wide difference the second scorer (Harry Kane with 7) and the third (Aleksandar Mitrovic with 6). For this reason, it is expected that in the course of it he can break all the records that the contest has.

Manchester City manager Pep Guardiola spares no praise for Erling Haaland whenever he can. The last time it happened in the preview of this match against Copenhagen, where he highlighted his goalscoring figures despite being only 22 years old. “At this age no one can compare to him. No one. His numbers speak for themselves. He is an exceptional player. He relies a lot on his physique. He is very intense and intelligent. He can play without problems every three days, ”said the Spaniard.

And it is that in previous campaigns, the cast ‘cityzen’ had inconveniences to close the matches due to the absence of a ‘9′ permanent. Midfielders like Bernardo Silva, Phil Foden or Riyad Mahrez have alternated in that position, but none has been a reference in attack. Therefore, the presence of the Nordic attacker is a goal guarantee for the team. 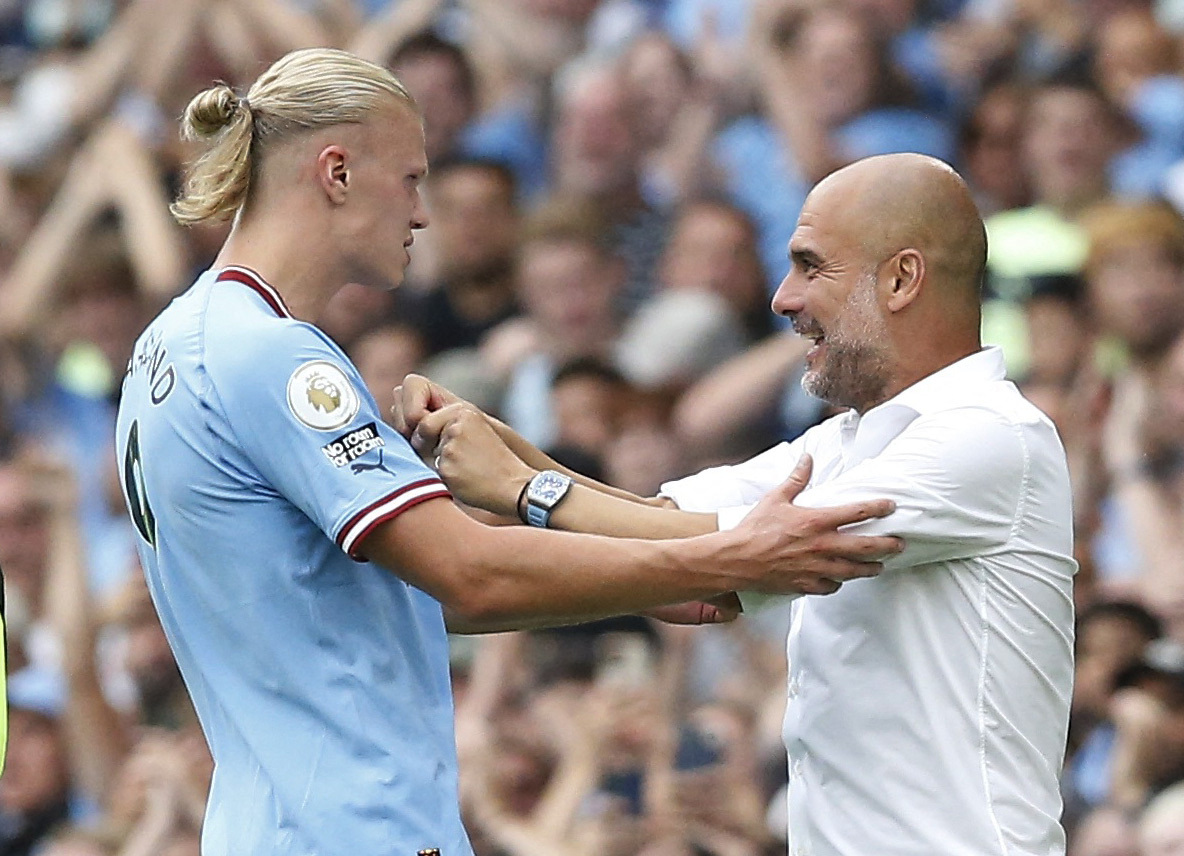 Pep Guardiola gets emotional in a hug with Erling Haaland. He knows that the Norwegian is a goal guarantee at Manchester City. REUTERS