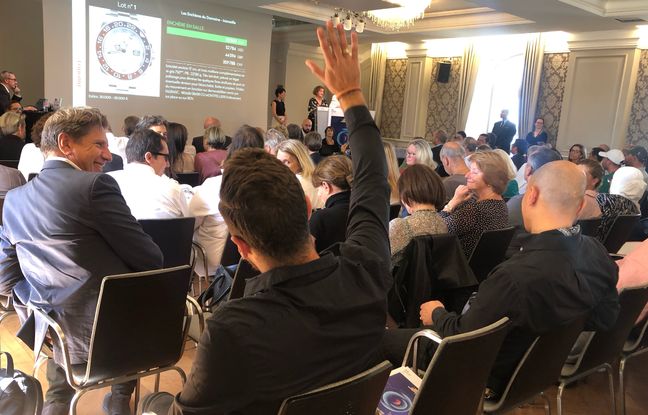 “I’m sorry, I have to leave you. I have to make a phone call to my bank and I’ll be back. Alexandre tumbles down the Pharo stairs in his black shirt, looking worried. The 30-something actually has a few good reasons to call his banker. As for his very first auction, he has just acquired one of the most prestigious lots this Wednesday, a very rare Rolex, made partly of meteorite, for the modest sum of… 54,000 euros. A watch that was seized by the courts from an offender, like the 208 other objects auctioned this Wednesday in Marseille.

The management of the agency for the management and recovery of seized and confiscated assets (Agrasc) of the Marseille city indeed organized for the first time this Wednesday a sale of all the goods seized since March 2022 in the south of France. to pimps, drug traffickers and other tax evaders. Sculptures, luxury watches, totally new Vuitton bags, Cartier jewels and even a Porsche: it’s a sumptuous Ali Baba’s cave that is squandered in the space of a few hours.

“The boat that we are selling, for example, comes from Corsica, explains Nicolas Bessone, general manager of Agrasc. It is the result of a case of rigged public contracts and embezzlement. In fact, there is a concession for Ajaccio airport to buy and mobilize boats in the event of an accident, the airport being by the sea. He bought the boats but they were not used for the airport …” A boat which, however, will not take takers.

“We also have the Ferrari handed over by the Béziers court, resulting from a fraudulent misuse of corporate assets case, continues Nicolas Bessone When you confuse your company’s accounts with your own bank account, you can buy yourself a Ferrari…” Sold at a call price of 35,000 euros, after having been immobilized since 2013, it will leave in the hands of an automotive professional at 68,000 euros. A second Ferrari of 400 horsepower will be sold for its part at 65,000 euros.

“The Mercedes Cabriolet is on an ongoing VAT fraud investigation. We also have a lot of Swiss watches. For organized crime that plagues Marseille, value watches are a vehicle for money laundering. It is also an investment, and a strong marker of social success for criminals. With Louboutins, Yves Saint-Laurent shoes, we still have a lot of flashy luxury products. Compared to the similar sale that we organized yesterday in Lyon, we don’t really have the same things… Let’s say that yesterday, it was the discreet charm of the bourgeoisie, less striking…”

Not enough to slow down the many buyers who responded this Wednesday. About 200 people attended this sale, in a packed room, in addition to the 1,000 people registered on the Internet. “Whatever the origin, the main thing is to buy!” smiles Sylvie. The Toulonnaise has set her sights on a large colorful ring, the price of which flies away in a few minutes to 500 euros. Too expensive for Sylvie, who, in the end, will leave with a gold necklace set with cultured pearls for 200 euros… which she doesn’t like. “It’s not to wear, she justifies. It is an investment for my children. “I came because I have a motorcycle shop, and let’s say that among my customers I have some of these people from whom these goods were seized…”, slips Georges, his catalog on his knees.

His 54,000 euro watch in his pocket, and after long minutes with his banker who obviously did not have great difficulty, Alexandre breathes. “I heard about this auction in the press, explains the 30-year-old. When I saw this watch I called a friend who I know is a hobbyist. He lives abroad and he told me he wanted her. He therefore asked me to buy it, for 56,000 euros maximum, and I take a commission on it. I am passionate, and I buy them, to resell them. But not right away, we’re trying to make some money on it…”

“This one will go up very quickly”

Behind him, Jean-François is not so lucky. Watch collector, the Marseillais, who saw his first auction, spotted “two bargains” that he intends to grab. “That one will go up very quickly, you’ll see, prophesies the connoisseur, about a totally new Rolex from the 1970s. The estimate is low. The prediction came true, and the watch, estimated between 1,000 and 1,500 euros, was finally sold for 3,600 euros. “The bids are going up too quickly, breathes Jean-François, who will leave empty-handed. I don’t know if in the end, we’re doing good business…”

The state, for its part, gets its money’s worth. “If the goods sold come from a drug trafficking case, the money will go to a fund which finances particularly technical equipment for wiretapping for the police, explains Nicolas Bessone. The sums will also be used for preventive actions against drug addiction. If they are tax evaders, the money abounds in the state coffers. If it is a case of pimping and treatment of human beings, it will be intended for a fund of the Ministry of Social Affairs which works for the reintegration of prostitutes. Finally, it also serves to compensate the victims. No less than 814,784 euros were collected thanks to this sale.