“We feel betrayed”. The phrase keeps coming back among the 80 employees of Camaïeu who had responded to the call of the CGT union for a general meeting, this Tuesday morning, in front of the headquarters and the warehouses of Roubaix, in the North. Last week, the Lille commercial court ordered the liquidation of the northern ready-to-wear brand, a flagship of women’s fashion.

On the agenda, the takeover project proposed by the CGT and a legal action led by lawyer Fiodor Rilov. “It is a question of organizing the response because this liquidation is unacceptable”, underlines Me Rilov, who came to present his legal action plan to the Lille court.

“Know the transactions that have emptied the cash”

The first step: obtain the documents relating to the financial management of Camaïeu, on the basis of a summary 145. “This company has been placed in receivership twice and the shareholders have made commitments. It is a question of knowing the operations which emptied the cash, ”explains Fiodor Rilov.

The crocodile tears of politicians, I have seen them flow for too long without any action being taken

The second step will consist, if there have been faults, in attacking the company in court in order to establish the possible responsibilities of the shareholders. “The crocodile tears of politicians, I have seen them flow for too long without any action being taken, denounces the lawyer. It is too late to prevent the dismissals, the fight must be fought on the legal ground to repair the damage suffered by the employees. » 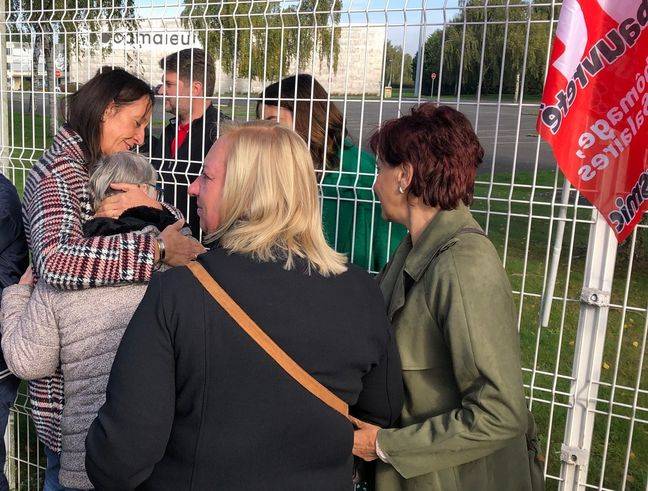 The emotion was still palpable during the general meeting of Camaïeu employees, Tuesday October 4, 2022, in Roubaix, after the announcement of the judicial liquidation. – G. Durand

Otherwise, the 2,600 licensees will only be entitled to any compensation at the legal minimum, paid by the AGS, the wage guarantee scheme. “Many are over 50, it will be almost impossible for them to find work,” laments Lucie Colier, CGT delegate.

On the side of another historic union delegate, Thierry Siwik – 38 years in business – the hope of a mobilization of the economic world remains intact. “You have to try everything for everything,” he says. We have a costed takeover project attached to the general manager of Camaïeu. About 15 to 20 million are missing. We are launching an appeal to financial partners and investors, but also to local authorities. »

Unable to enter the site, the employees therefore held a general meeting full of hope in front of the gates of the headquarters. “The recovery would be a good thing. I hope it will work, ”slips Idir. At the age of 40, he has been working in Camaïeu for 18 years in the shipping department, then transport.

In the meantime, a few tens of meters away, the agent and the judicial liquidator were on site, inside the premises “to carry out the inventory of the assets and prepare the sale for cutting”, according to the CGT. And a union trade manager explained: “The stores, the brand, the real estate, the stocks… Everything can be sold in batches. This is also called salami”. And in all that, a customer base of 7.7 million people.