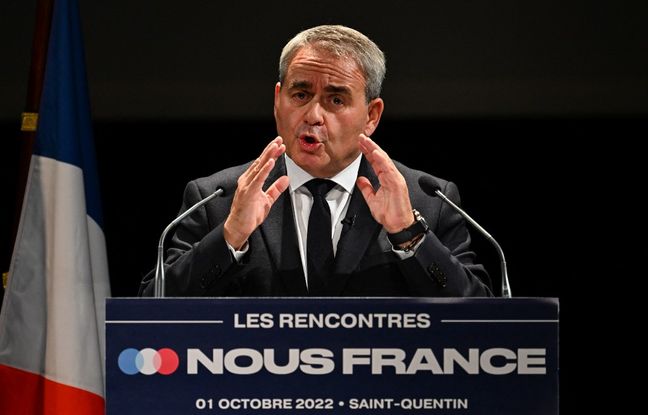 The president of the Hauts-de-France region Xavier Bertrand, still a member of LR but who has just created a new party on the right, said on Sunday “ready to support” a pension reform. On BFM TV, the former candidate for the LR primary for the presidential election said he was in favor of “working a little longer”, a “central path” according to him against the other two which are the drop benefits or increased contributions.

The executive wishes to initiate this week a consultation with the political parties and the social partners on the subject of its pension reform, the objective of which is to gradually raise the retirement age to 65 by 2031. Olivier Marleix, leader of the LR deputies, said he wanted working hours to go “gradually to 64 years”.

“Ensuring the balance of the system to pay pensions”

“I am ready to support a pension reform that will contain efforts because we must ensure the balance of the system to pay pensions, not to save money, but we clearly need justice and a real ad hoc text” , pleaded on BFM TV Xavier Bertrand, who had led a pension reform at the end of the 2000s, under the mandate of Nicolas Sarkozy.

According to him, “from the moment you ask for an effort, you must have justice”. But “French injustice is the time you have left to live in good health when you retire”, he explained, citing the case of physically demanding jobs: “Those must leave earlier. This is where the justice is”. Xavier Bertrand, who launched his We France movement on Saturday, also rejected the prospect of a “forced passage” in Parliament, “because otherwise, from the start, you will not have the support of the French”.

Long careers, arduous work, “the prevention of wear and tear at work”, “subjects of end-of-career planning, and transition between employment and retirement”, “employment of seniors and the fight against the discrimination of which seniors may be victims”, “special regimes”, “the revaluation (to 1,100 euros) of the minimum pension for people who have had a full career” are among the themes open to consultation, had detailed in recent days Prime Minister Elisabeth Borne.