A year after its initial release, the game has finally wriggled out of the stranglehold of its Playstation exclusivity contract. Deathloop is playable for the general public and that seems like a good reason to write a review.

Much has been written and talked about Deathloop over the past year. I honestly don’t know what else to add to that. Arkane’s latest game was released on the Playstation in September 2021 and managed to win the title Game Of The Year at many platforms and award shows. I also enjoyed playing the game on my PS5 last year. Now, a year later, the game can also be played on Xbox and the game has also been added to the Xbox Game Pass. We owe the latter, of course, to the Bethesda-Zenimax acquisition.

In addition to the advantage that the game can be played in Game Pass, the Xbox Series X also offers the best console experience. Deathloop can be played in a number of modes and in the Quality Mode in particular, the game excels on the Xbox Series X. The colors, details and frames splash off your screen and that’s a good thing. Deathloop is a game in which you want to be carried away and then of course you want to get the best possible experience. So the optimists among us will have found the wait for the recently released Xbox Series X version worth it. In addition, the developers celebrated the re-release of Deathloop with a Goldenloop update.

What’s up with Colt?

Perhaps you didn’t get much from Deathloop last year and after reading the introduction of this review you have the question what kind of game it is. Deathloop is a first person shooter in a Roguelite sauce. Simply put, this means that the game regularly restarts from the beginning. How about that?

As a player you take on the role of Colt and you are stuck in a time loop. The object of the game is to escape from this time loop. The time loop takes place on an island called Blackreef, more about that later. To break the time loop you will try to collect information as Colt, with which you will kill eight characters in the world. Successful completion of this leads to breaking the time loop. Of course, as a player you will not succeed in this in one run and you will regularly start over, at different times of the day.

The fact that you can’t break the time loop in one go is partly because Colt is being hunted by a silent killer. Julianna is after you and the world in Blackreef is full of her henchmen. So as a player you want to try to be one step ahead of Julianna. As far as I’m concerned, this keeps the game feeling fresh and varied. The interaction with Julianna is hilarious and as a player you will notice that the world of Blackreef is getting bigger and more diverse. You will try new things, often based on information you have gathered from a previous run. As far as I’m concerned, the risk of roguelite games lies in the fact that the gameplay can quickly become saturated. In Deathloop, you don’t have to worry about that.

Another strong point is the shooter action and all the upgrade options that the game gradually introduces to the player. This way you will encounter different weapons, you will unlock bizarre powers and your options as a player will become more and more varied. Stealth, guns blazing, blasting things from afar. As time goes on and your player makes more progress, the game also becomes more interesting. This is also necessary, in order not to get into the grind of the time loop.

The developers know how to add new things at the right times, so that a sense of repetition rarely arises. For the game experience, I also think it’s a good choice that there are powers and upgrades that you can take with you in a new round. In addition, as a player you are invited to play the time loop in-game at different times of the day. You notice that the setting changes, NPCs are in different places and there are new things to discover.

One caveat I want to make is about switching weapons. It’s hard for me to get used to this. You can rotate different weapons on one hand, but the use of the weapon is not always the same button. This is how you use a gun with RT, you switch to your machete with RB, you don’t use this weapon with RT but RB and you switch back to your gun with Y. As confusing as it is here, so confusing I keep it in the find game. I would have preferred that the weapons could be summoned in a radius and you could choose from here. 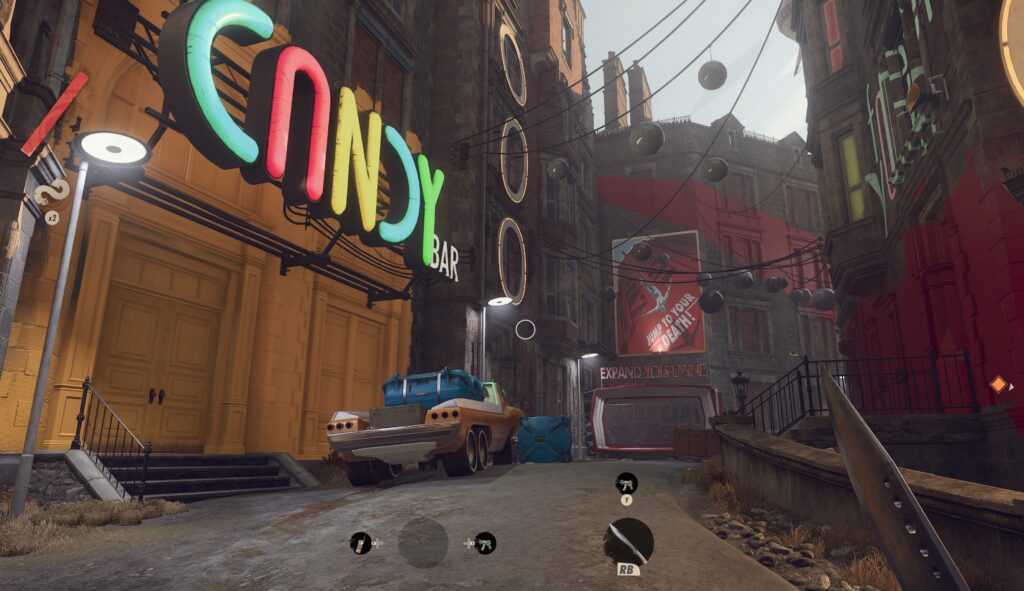 The gameplay and storytelling are so good. The world of Blackreef is also well put together. I’m not sure how to describe it, but there’s something futuristic about the world. It’s like looking through an insta filter into a 60s-70s world. It especially looks very stylish and atmospheric, at the same time the world also feels gray and dilapidated at times. The world of Blackreef is also full of interesting details. There is a lot to find in the world, which gives the world and the story more depth. From posters, to notes, to conversations that you overhear. The conversations you overhear also contain the necessary humor. The NPCs in the world are aware that they are in a time loop and regularly make fun of this: ‘how many times have you shot Colt?’ Small and subtle dialogues that make the game very authentic.

The world in Blackreef is alive and becoming more and more alive. However, as a player it is not always easy to find your way. Basically it is clear what needs to be done: break the time loop by taking out a number of NPCs. However, you will often have to make several intermediate steps for this. The questline structure is not always clear to me. Where should I go and what information is useful right now? The game invites you to explore these points and that works out well, because there is a lot to see and discover.

We knew that the developers at Arkane are capable of releasing top games. Dishonored and Prey were unforgettable experiences. However, the latest title Deathloop is the breakthrough, with which the general public has been reached. Deathloop brings a great story, a beautiful world and very nice gameplay. As far as I’m concerned, a potential Game Of The Year for the second year in a row.