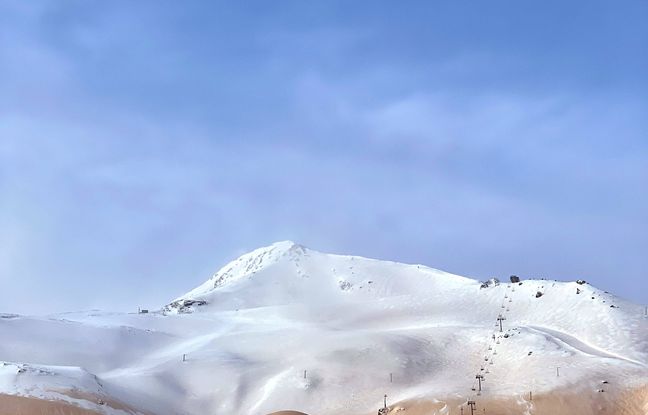 Over the past two winters, images of ski slopes covered in a light ocher color have made the rounds on social networks. If they give an apocalyptic side to the stations, this natural dust from the Sahara also plays a significant role in the melting of the snowpack. Just like the deposits of carbon sootthese particles resulting from combustion and which could sometimes make believe that the glaciers, tinted with a light black film, are next to a busy highway.

A phenomenon that is easy to understand, because the darker a color, the more it absorbs light radiation. It’s like when you make the mistake of wearing a black T-shirt in the middle of a dodger, immediately regretting not having had the good idea to opt for white. When it is covered with a fine film of dust from the Sahara, or particles of « black carbon », the snowpack absorbs a greater proportion of solar energy and melts faster. Added to the high temperatures and low rainfall, symptoms of global warming, these deposits aggravate the situation.

To determine what the real impact of these impurities is on the melting of white gold in the Alps and the Pyrenees, a team of French and American researchers sifted through observations of snow at weather stations made between 1979 and 2018. on the two massifs, as well as satellite images. These data, combined with climate and snowpack models, allowed the scientists to determine that “these dust and soot carbon deposits tend to advance the date of melting of the snowpack by an average of 17 days per year out of the forty years,” says Simon Gascoin, CNRS researcher at the Center for Space Studies of the Biosphere in Toulouse, and co-author of a study on the subject published in the journal Nature Communications.

As it is an average, certain years, at certain altitudes, this melting was sometimes anticipated by 50 days. Sometimes only a few days.

But, according to researchers who have looked into the subject, it could have been worse. “Climate change, due to rising temperatures, is accelerating the melting. We have been able to observe that this impact is, in part, offset by the decrease in black carbon over the past 40 years. If we had had the same level of particle deposition today as in the 1980s, this acceleration in the melting of the snowpack would be even more marked”, adds Marion Réveillet of the Institute of Environmental Geosciences of Grenoble.

Efforts to limit industrial pollution or those deployed to improve vehicle emissions, in particular the obligation to have catalytic converters and particulate filters, therefore have a very real impact on our environment. And it is far from negligible when we know the importance of the role of the melting of the snowpack on the water resource. It can power hydroelectric dams, and therefore produce energy that is sorely lacking at the moment. It is also recovered by dams in the mountains, from which water is released regularly to replenish the rivers in the event of drought. The same rivers and streams that are used to irrigate the fields of farmers but also some drinking water stations in French municipalities.