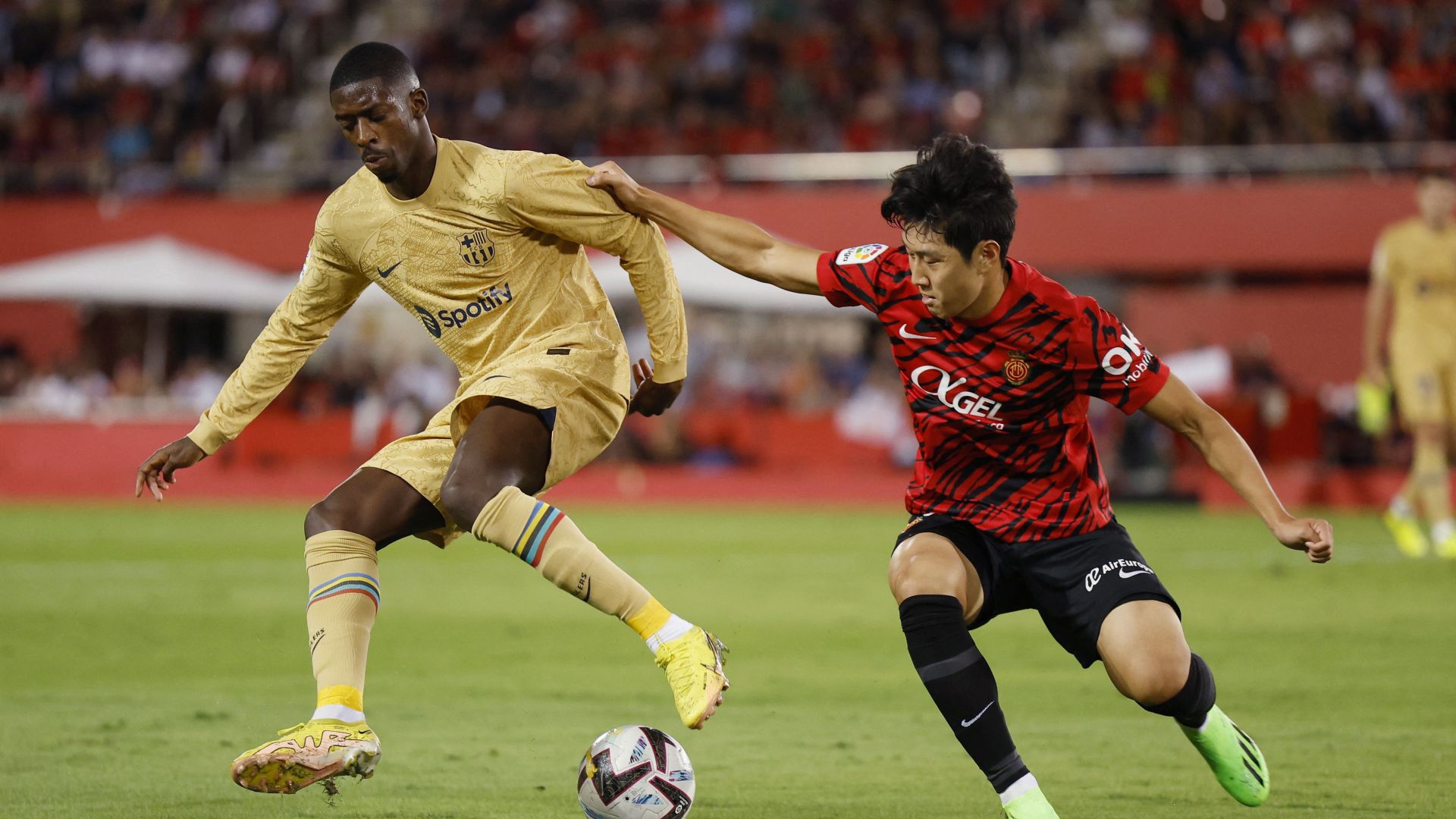 Barcelona vs Mallorca: match for date 7 of LaLiga

Barcelona vs Mallorca: the team’azulgrana‘ faces the ‘bermellones‘, today, Saturday, October 1 at the Visit Mallorca stadium in Palma for date 7 of the LaLiga.

MIN 74: Yellow card for Sergio Busquets (Barcelona) for a foul against Baba (Mallorca)

MIN 51: Ugh! Antonio Sánchez (Mallorca) finished off inside the area and Ter Stegen (Barcelona) covered after a stretch.

MIN 46: The second half started.

MIN 39: Yellow card for Christensen (Barcelona) for a foul against Muriqi (Mallorca)

MIN 35: Ugh! Costa (Mallorca) was within a shot of goal on the edge of the small area, but goalkeeper Ter Stegen (Barcelona) rejected with his leg and prevented the fall of his bow.

MIN 7 Ansu Fati (Barcelona) finished off, but without direction he goes off the field.

MIN 5: Ruíz de Galarreta (Mallorca) shot from the edge of the area and went over the crossbar.

MIN 1: The first half started.

Barza arrives at the duel with the ‘pirates‘ with mixed feelings when adding his first defeat in the Champions League against Bayern Munich and in his duel prior to the break for the FIFA date he won against Elche at the Camp Nou.

Barcelona’s latest victory, with a double from Robert Lewandowski and another goal from Memphis Depay, allowed them to chain five wins in a row in LaLiga and place themselves as provisional leader of the standings before their classic rival, Real Madrid, beat Atlético Madrid in the derby that allowed him to return to the top of the table.

Los ‘culés‘ have added 16 points, they are in second place in the table with the same score as Athletic Bilbao, but with a better goal difference, and with a difference of two points compared to the leader Real Madrid (1st with 18 units).

With a victory, Barcelona will reach first place in the table in the absence of Real Madrid’s match against Osasuna on Sunday, October 2, which will be played at the Santiago Bernabéu stadium.

For its part, Mallorca receives Barcelona from the tenth place in the table with 8 points. The ‘bermellones‘ They achieved a victory against Almería in their last match for the Spanish league in an irregular campaign with two wins, a couple of draws and the same number of defeats.

Barcelona coach, Xavi Hernández, is forced to make variations in his starting team due to the multiple injuries of his main figures, some recent due to the participation of his players with their respective teams.

Barcelona faces Mallorca for date 7 of the Spanish league

El DT ‘azulgrana‘ called up the youth squad Marc Casadó to complete the list, like Pablo Torre, they are expected to go to the substitute bench, due to the absences of Jules Koundé, Ronald Araújo, Memphis Depay, Héctor Bellerín and Frenkie de Jong. However, defender Sergi Roberto has recovered from a muscle injury and will be present for the match in Mallorca.

Meanwhile, the strategist of Mallorca, Javier Aguirre, also suffers casualties due to injury. Dominik Greif and Tino Kadewere were not called up. However, the DT recovered Rodrigo Battaglia and Nastasic after overcoming their physical ailments and has full confidence in his attacker Vedat Muriqi. Another footballer who could make a comeback after a prolonged absence from the pitch is Amath Ndiaye. 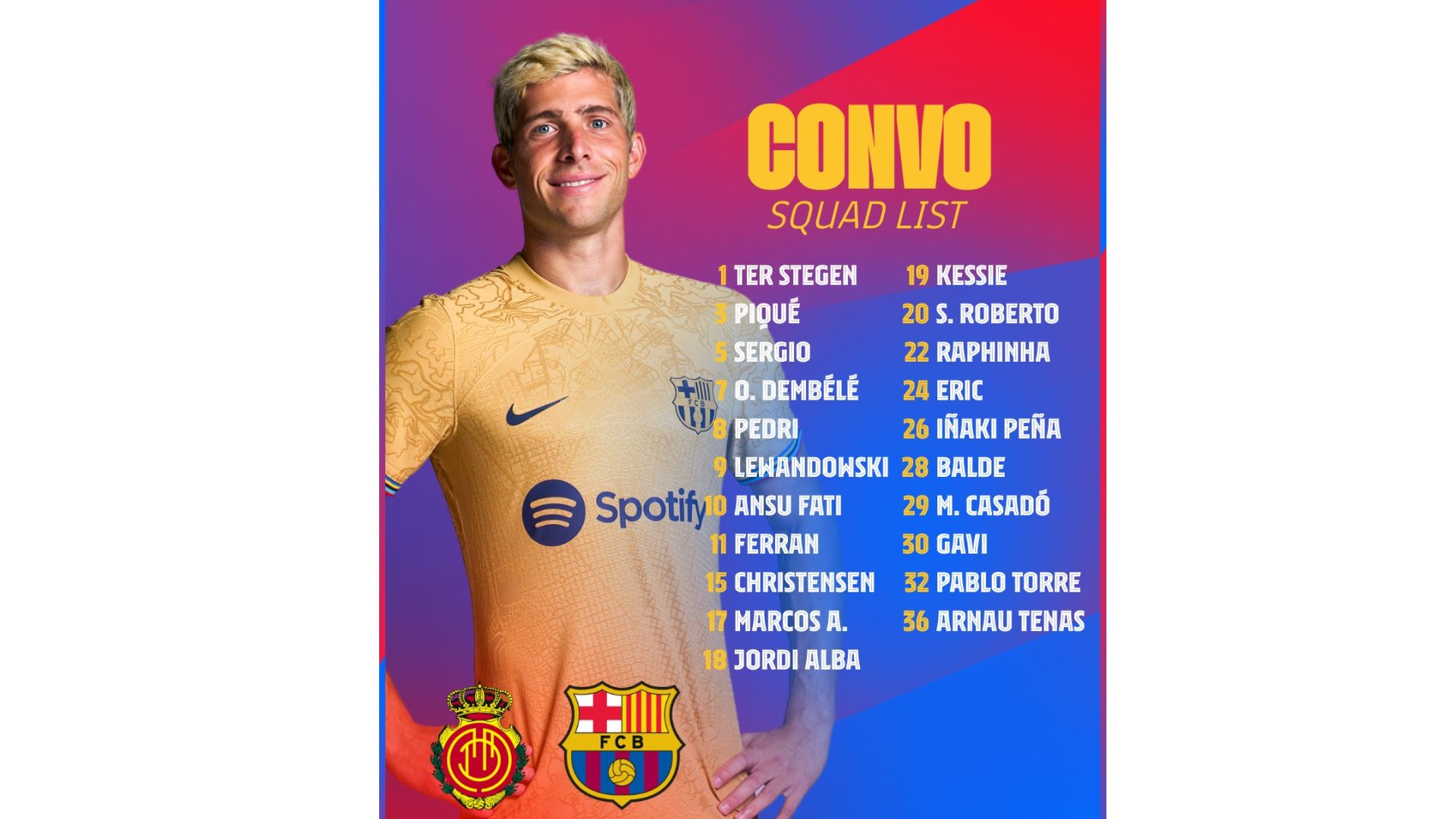 Barcelona vs Mallorca: list of summoned of the club ‘azulgrana’ for the duel by LaLiga

The most recent confrontation between Barcelona and Mallorca was on date 34 last season of LaLiga. The ‘azulgranas’ won 2-1 with goals from Memphis Depay and Sergio Busquets at the Camp Nou.