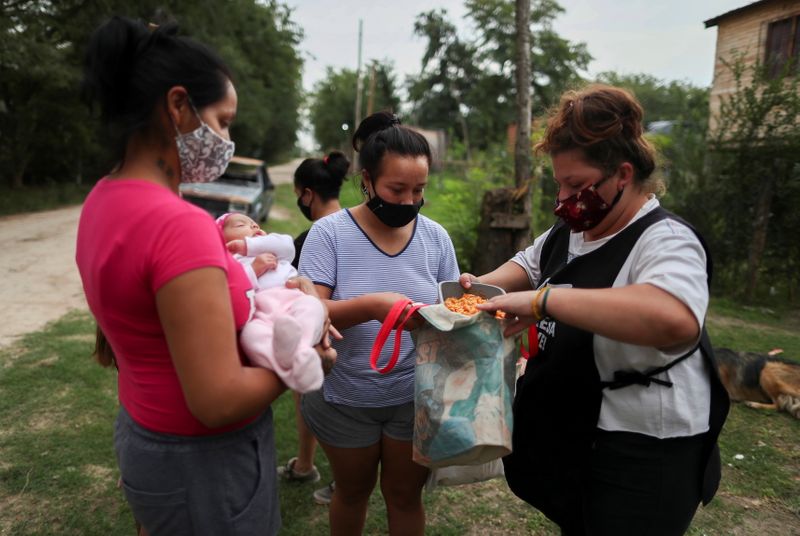 The sharp drop in the level of poverty in the last Indec measurement in the province of Formosa drew the attention of experts in social statistics.

After the Indec reported a drop in poverty in the first half of this year at the national level, the Cedlas expert Leopoldo Tornarolli indicated in this regard: “This is how poverty evolved between semesters in the agglomerates: +11.2 Corrientes, +8.4 Viedma -Patagones, +7.0 La Plata and +5.5 Paraná. It dropped from 45% to 24.4% (20.6 points) in Formosa! This tells us that there is too much noise when analyzing at the aggregate level, it is not very useful”.

Tornarolli told Infobae that “it is rare; Indec does itself a disservice by disaggregating regional data by city, it should be limited to regional figures, not by city”.

“In 2020, the result of Formosa was similar to the measurement of the country, which was 42% in the second semester. In 2021 the country closed at 37.3% and in Formosa at 45%, that is, the opposite occurred in 2022; in that case, it may be some issue associated with sampling,” said Tornarolli.

“Something similar happened in Corrientes: before it had dropped a lot and now it is aligned with the rest,” said the Cedlas specialist.

Meanwhile, the director of the UCA Social Debt Observatory, Agustín Salvia, told Infobae: “This is not new: in the latest measurements, including in the renewed Indec, you are going to see jumps in Mendoza, San Juan, Córdoba ; they are rare situations by locality or agglomerate”.

“If we are looking for an economic explanation, it is wanting to impose it, because what I think is the data is wrong. This does not delegitimize INDEC, but it points to problems related to the statistics directorates of the provinces and not necessarily as political manipulation, but rather as vices or lack of team training,” Salvia said. 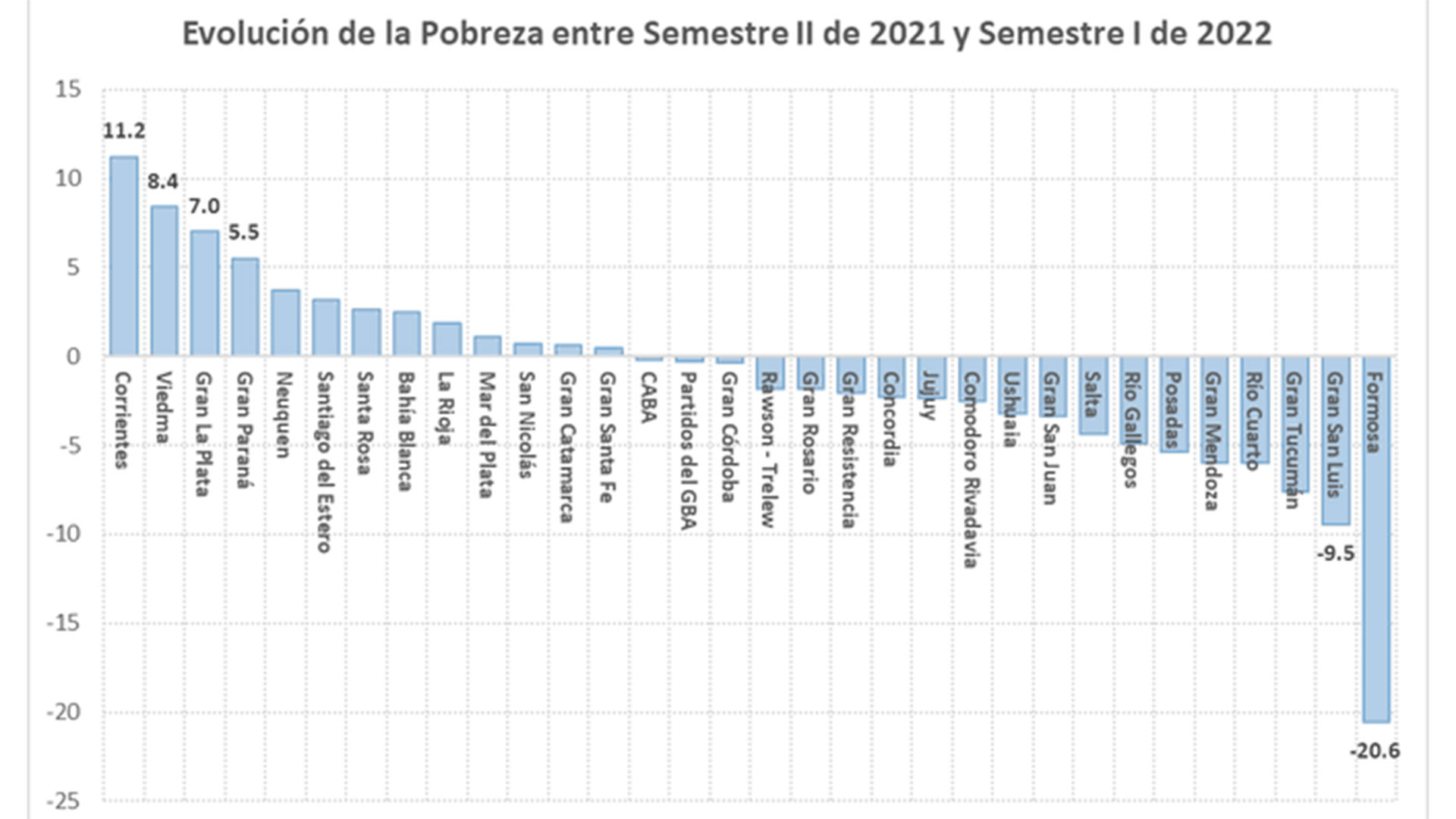 Evolution of poverty by provinces Source: Leo Tornarolli based on official figures

“Then, in addition, comes the correction, because in the next measurement, the aim is to improve the data, not necessarily to intervene, but rather to improve the way of measuring it and poverty tends to go down,” Salvia clarified.

“Both the increases and the reductions greater than 5 points are hardly credible, because no productive revolution or catastrophe occurred to justify such a high variation, which is inexplicable,” said the UCA expert.

“This downward bias is not credible and if one were to measure it with respect to the second semester, one would observe a bias in the measurement. Because in the metropolitan area of ​​AMBA there were almost no variations”, he concluded.

“All this is part of the process of long statistical normalization,” said Salvia, in relation to the process that Indec had to face after the manipulation of the statistics recorded from 2007 to 2015.

Meanwhile, Martin González Rozada stated that “there are three factors that contribute to explaining Formosa in some way: there is a lot of variability because the size of the survey is small; 24.4% could have been 31% just because of variability.” 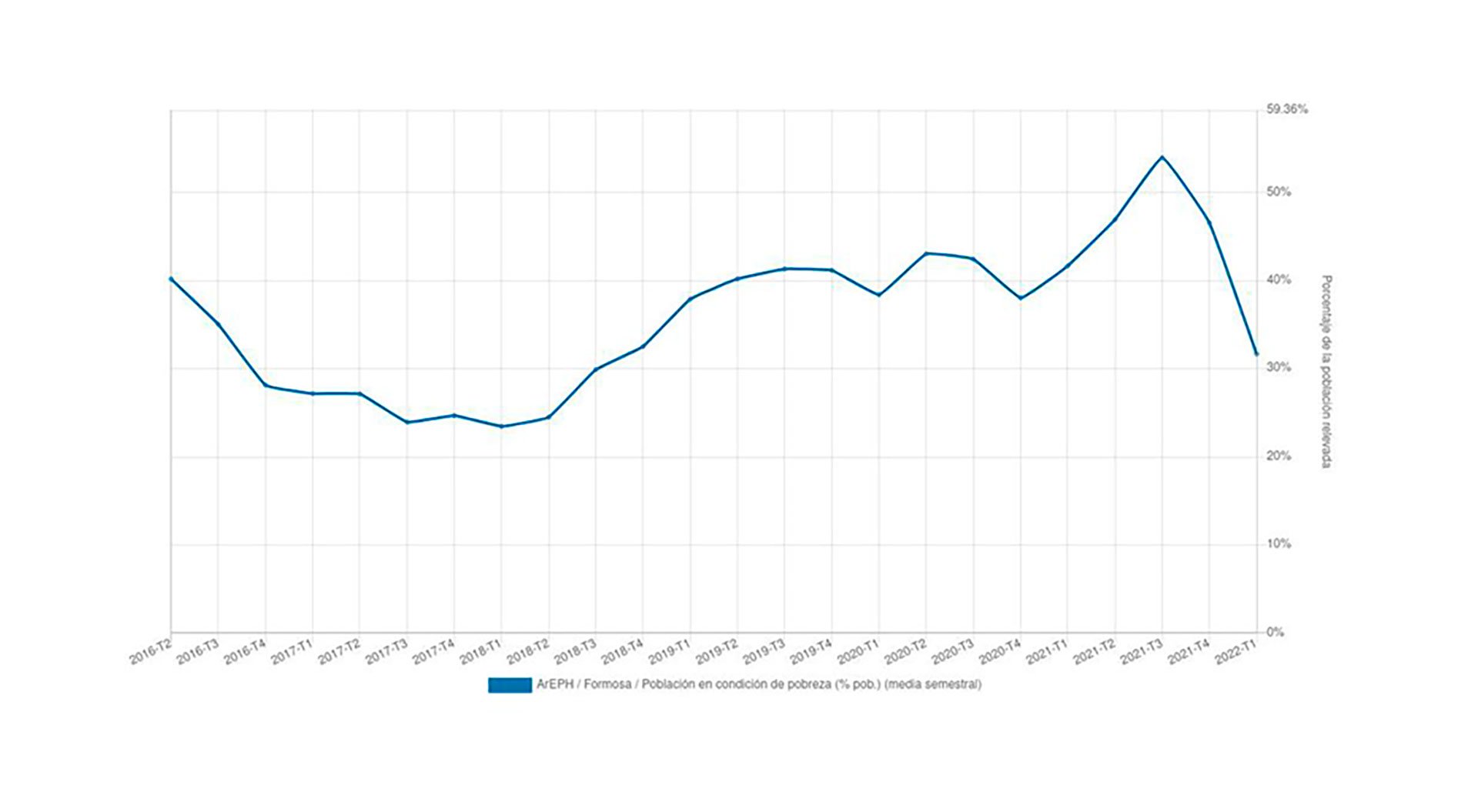 Evolution of poverty in Formosa Source: Leo Tornarolli based on official data

In addition, the total basic basket “increased between the second half of 2021 and the first half of 2022 around 29%; and the Total family income captured by the EPH in Formosa grew more or less 43% in the same period (the income of the 4 lowest deciles of the distribution grew more than that). This 43% increase is part increase in individual income and part increase in income earners (the employment rate went from 32% to 37%)”.

“In Corrientes, which is the other extreme, the opposite happens: total family income grows less than the CBT and the employment rate falls,” said the UTDT expert.

When asked about the way of measuring poverty in the provinces, Indec sources told Infobae that “everything is worked within the framework of the Permanent Household Survey; the teams of each province are in charge of each provincial statistical directorate, which works with the INDEC guidelines, but the work in the field is coordinated by each province”. Infobae consulted the Formosa statistics department, but so far has not received a response.

The increases that will arrive in October: electricity, gas, water, prepaid, telephony and expenses For the UCA, poverty and indigence will increase in the second half of the year The real exchange rate accumulated a delay of 17% in the last six months and is at the same level of 2017