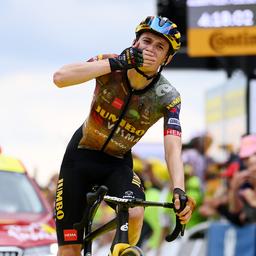 Jonas Vingegaard recorded his first victory on Thursday since his triumph in the Tour de France. The Dane was the strongest in the third stage of the Tour of Croatia.

Vingegaard was the first to climb a nasty final climb in a 157-kilometer ride from Sinj to Primosten. The 25-year-old rider of Jumbo-Visma was ahead of Briton Oscar Onley and Slovenian Matej Mohoric. Martijn Paasschens was the best Dutchman in tenth place.

For Vingegaard, the Tour of Croatia is his first race since the Tour in July. After his triumph in France, he took a rest period and, among other things, skipped the World Cycling Championships in Australia. In Croatia he is preparing for the Tour of Lombardy, which is the traditional end of the cycling season on 8 October.

Vingegaard climbs to second place in the general classification. He is one second behind the Italian Jonathan Milan, who won the first two stages in Croatia.

In addition to Vingegaard, his teammate Milan Vader is also participating in Croatia. The Dutchman is making his comeback after he crashed hard in April in the Tour of the Basque Country. Father was in a coma for almost two weeks and suffered a broken vertebrae, a broken collarbone and a broken shoulder blade.

The Tour of Croatia lasts until Sunday. Friday is a 219 kilometer long hilly ride from Biograd na Moru to Crikvenica on the program.