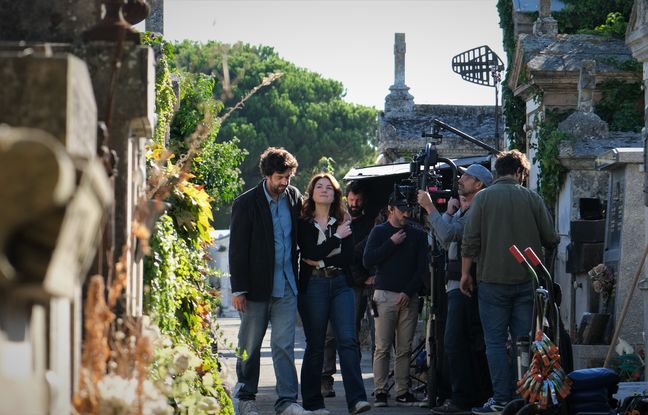 In recent days, the people of Toulouse have been able to cross paths with Max Boublil or even Emilie Dequenne. Never far away, a film crew follows the actions of this couple brought to the screen by Claire Vassé in her first feature film, Bifocal, which will hit theaters next year. For nearly a month, the director and her entire team have been packing their bags in the Pink City which serves as the setting for this singular story. “The city stuck to the spirit of the film, everyone can find their way around. It has no social connotation, it is less marked than Bordeaux or Paris, which has been filmed a lot. We received here a benevolent welcome from everyone, from the mechanic, from the baker. Being surrounded by this state of mind also carries, “says the one who was a film critic before going behind the camera.

From the Montplaisir garden to the rue des Potiers, via the Terre-Cabade cemetery, she has used all the “diversity” of the natural settings of the Pink City. But also the means deployed by the filming office From toulouse. A service that puts oil in the wheels to facilitate all logistical issues. “Our added value is to open all the doors, to support filming”, assures Patrice Vassal, the general manager of the Toulouse Métropole attractiveness agency on which the filming office depends, which for a year has been carrying out field work. to identify all the sites of the peripheral municipalities which could offer a favorable setting for shooting.

Their work also involves putting them in contact with professionals in the sector, but also students from the Ecole Nationale Supérieure de l’Audiovisuel, some of whom took part in the filming of Double foyer. Showing that the resources are present on this side of Occitania is an important point in order to stand out and try to find a place among the places now identified by French cinema.

Competition from Sète and Montpellier

Because in recent years, Sète, with Tomorrow belongs to us, Montpellier and the series Un si grand soleil, or even Marseille and More beautiful life, have become essential cities. “When there is a daily newspaper, it allows the technicians to live all year round. Elsewhere, it may require a little more work up front. But, unlike Sète or Montpellier, here people are not saturated. We have no regrets about having chosen Toulouse”, assures Salam Jawad of Orok films, the production company of Double Foyer.

For her, the Pink City could do well thanks to all its assets. Since a few months, the Big 7, a film studio, makes it possible to shoot scenes in the interior setting of an airplane cabin. It is also the world of aeronautics in the 1980s in Blagnac that served as the framework for the mini-series ToutoutYoutou, currently broadcast on OCS Max. These episodes, which humorously address the emancipation of women through aerobics, were made in Saint-Jean or Tournefeuille. But at the filming office, we don’t want to limit ourselves to pink brick and tarmac to attract directors, whether of feature films, shorts, pubs or music videos.

“They have reconstructed Saint-Malo to Villefranche-de-Rouergue for the needs of a Netflix series this summer”, recalls Emmanuelle Rossignol, project manager within this service. A diversification that allowed them to attract Olivier Marchal in 2021 for his film Overdose. If this year, the shootings were less numerous, between 2017 and 2021, the number of shooting days more than doubled.

And, thanks to the presence of its teams at the biggest trade fairs in the sector, the shooting office hopes to get noticed. “Since 2019, the metropolis has also set up a support fund to help with creation. It has a budget of 500,000 euros and to benefit from it you have to go through a selection committee. We hope it will be a lever”, explains Patrice Vassal who does not hide his ambition to make Toulouse a reference in cinema, and not only in animation.