Ricardo Salinas Pliego, founder and president of Grupo Salinas, published that You plan to choose 12-15 people who interact with your social media accounts to invite to your birthday party.and it is that the tycoon will turn 67 on October 19.

“I’ll figure out what to do to select them, I’ll invite some from each social network,” wrote the businessman who has more than a million followers on Twitter.

As was to be imagined, several netizens were enthusiastic about the idea; Among the responses to the businessman are comments such as “life is exciting: yesterday I slept under a bridge and today I am at Ricardo Salinas Pliego’s birthday”; “If you invite me, I’ll bring guacamole for everyone, Uncle Richi,” and “Blessings to you, dear Mr. Salinas.” 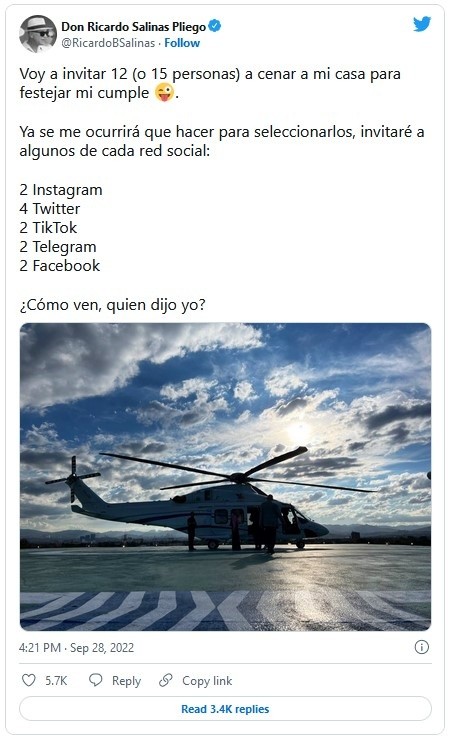 In addition, because Salinas Pliego’s publication is accompanied by a photograph of a helicopter, some users they have interpreted it as that the guests would be transferred to the “fiestón” aboard one of these vehicles.

And although he has not said what the mechanics will be to be one of the exclusive guests, “Uncle Richi”, as they call him on networks, already discarded one of his followers after he stated that he would only go “if they come in the helicopter for me, if not I won’t go.”

Other Internet users have been more accommodatingFor example, the user @osvigarcia responded with a photo of a frozen beer container and asked the owner of Banco Azteca and Totalplay what his favorite loggerheads are.

On the other hand, some users they recalled the occasions in which Mr. Ricardo Salinas has promised to give money to users of social networks; For example, when on his last birthday he asked his followers to download a Banco Azteca application and distributed money among all.

In August of this year, he said that he would raffle a million pesos among his followers if Mazatlán FC beat Club América, which did not happen.

Salinas Pliego assured that he will take two guests from Instagram, another two from TikTok, two on Facebook, two more on Telegram and four from Twitter, although it will be necessary to be attentive to know how to participate.