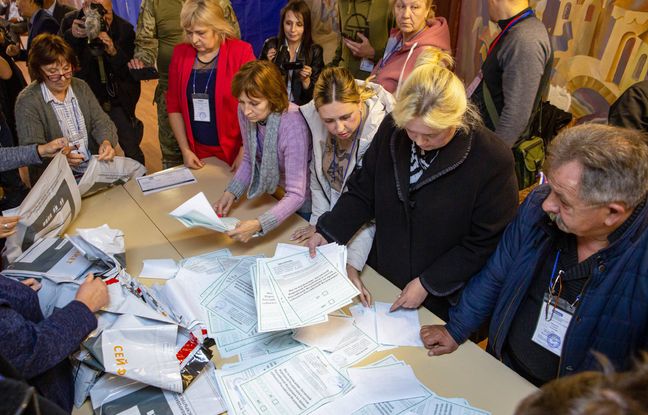 The result is no surprise. The pro-Russian authorities of the Ukrainian regions of Zaporozhye, Kherson, Lugansk and Donetsk on Tuesday claimed the victory of the “yes” in favor of annexation by Russia, during the “referendums” organized by Moscow. The next step is for the Russian Parliament, which is supposed to vote in the coming days on a treaty formalizing the integration of the four regions into Russian territory. Vladimir Putin could then make a speech as early as September 30 to formally announce the annexation of these territories, according to Russian agencies.

The allies of Ukraine have denounced these elections, organized in an emergency in the face of the progress of the forces of kyiv. The UN Under-Secretary General for Political Affairs thus repeated on Tuesday during a meeting of the Security Council on these “referendums”, the support of the United Nations for “the territorial integrity of Ukraine”.

The tension goes up a notch between Brussels and Moscow. And once again, gas is at the heart of the discord. Out of service because of the war in Ukraine, the Nord Stream gas pipelines linking Russia to Germany under the Baltic Sea have indeed been affected since Monday by spectacular, mysterious leaks preceded by underwater explosions. Just like the Polish Prime Minister, the President of the European Commission, Ursula von der Leyen speaks of “sabotage”, while the Danish Prime Minister considers these “deliberate acts”.

kyiv goes even further by denouncing “a planned terrorist attack” by the Kremlin, without however providing any evidence. On the American side, Washington, on the other hand, refused to “confirm” an act of sabotage. Finally, “extremely concerned”, Moscow considers for its part that “no” hypothesis should be excluded.

Space is lacking in French hospitals. In total, more than 21,000 beds were eliminated over the period from the end of 2016 to the end of 2021, corresponding in large part to Emmanuel Macron’s first five-year term. As of December 31, 2021, the 2,984 public and private hospitals had exactly 382,587 full hospital beds, i.e. 4,316 fewer in one year. Health establishments still created, in 2021, 2,700 places for partial hospitalization, according to a study by the Ministry of Health.