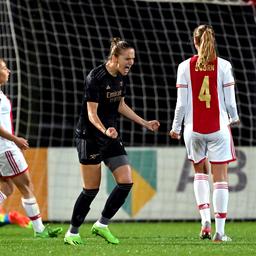 Ajax Women failed to qualify for the main tournament of the Champions League on Wednesday evening. Due to a goal by Vivianne Miedema, the Amsterdam team suffered a disastrous 0-1 defeat against Arsenal at home.

Orange striker Miedema made the decision in Amsterdam early in the second half. Last week Ajax had drawn 2-2 in the first leg on English soil.

Ajax hoped to qualify for the main tournament of the Champions League for the first time since the 2020/2021 season. At the time, a place in the quarter-finals was missed against the strong Bayern Munich.

Arsenal was quarter-finalist in the prestigious tournament last season. The three-time national champion of England then went down against VfL Wolfsburg.

The season for Ajax Women continues on Sunday with a home match against sc Heerenveen in the Azerion Women’s Eredivisie. The team of coach Suzanne Bakker recently started the competition with a 4-0 win over Fortuna Sittard.

The level of Ajax-Arsenal was somewhat disappointing in the first half on Wednesday at sports park De Toekomst in Amsterdam. In the first fifteen minutes Ajax was stronger, but that did not provide Bakker’s team with many great opportunities.

In the future, Arsenal had most of the ball, although that did not lead to great danger either. However, Ajax had to pay attention to opportunities for Stina Blackstenius, Laura Wienroither and Miedema.

Even after the break, Arsenal had the upper hand and this time it did lead to a goal. Miedema was given the space in the 51st minute to strike from a distance and the all-time top scorer of the Dutch team outwitted keeper Lize Kop with a slider.

After Miedema had missed the chance of a second goal, Ajax came out a little more. Twenty minutes before the end, it led to a great opportunity for substitute Tiny Hoekstra, who just came up short to finish. The home side never came any closer.