Volodimir Zelensky’s government on Tuesday accused Russian forces of torturing Ukrainian troops in electric chairs, a complaint that has gained strength in recent weeksby recovering territories that were in the hands of Kremlin troops.

“Another Russian torture chamber in the unoccupied territories near Kharkiv. This is what a Russian electric chair looks like. Only this is not an instrument of justice for criminals, but a tool for Russian executioners and sadists who tortured the Ukrainians”the Ukrainian Defense Ministry said in a publication that accompanied the photo of what it said was an electric chair used by Kremlin soldiers to torture Ukrainian troops.

After the recovery of the city of Izium, in Kharkiv, not only was the existence of mass graves revealed where entire families of Ukrainians were buried during the period in which it was under Russian rule, according to the Ukrainian authorities. 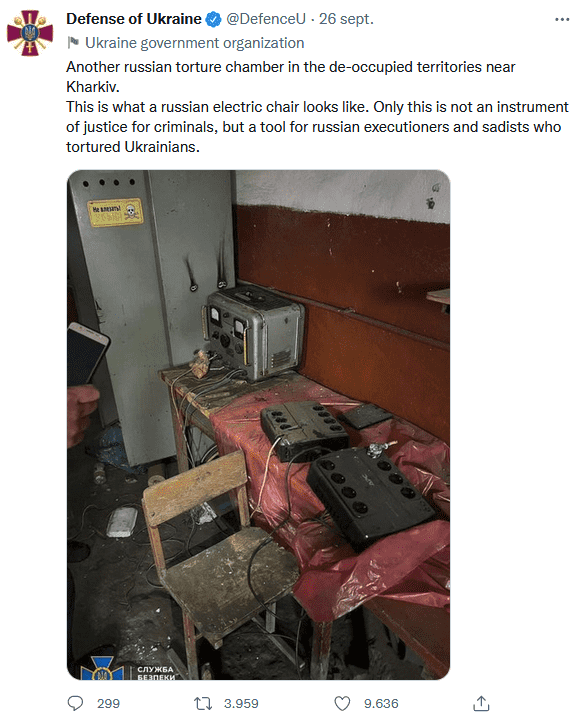 Soldiers reported being tortured. Also citizens like Maksim Maksimov, who pointed out that after being arrested, Russian soldiers gave him electric shocks in the basement of the Izium police station. They sat him in an office chair and put a zigzag crocodile clip on his finger, he said after being released as Ukrainian troops entered the city. He was wired into an old-fashioned Soviet military field phone.

According to Maksimov’s narration, echoed by media such as “The Guardian”, a soldier turned the crank, making it turn faster and faster. This sent an excruciating pulse through Maksimov’s body. “I collapsed. They lifted me up. I had a hood over my head. I couldn’t see anything. My legs went numb. I couldn’t hear out of my left ear,” he recalls. “Then they did it again. I passed out. I came to 40 minutes later, back in my cell.”

The Russian army occupied the Izium police station in April. According to Maksimov, a 50-year-old editor, the soldiers rounded up all those suspected of holding pro-Ukrainian views.

The Ukrainian said that the russians were looking for military veterans, national guard volunteers and city hall officials. They had a list of names. Some local politicians appear to have collaborated, he noted. Among them, several city council deputies and a retired police chief, Vladislav Sokolov, who became the new pro-Vladimir Putin “mayor” of Izium.

Residents were unable to tell Ukrainian forces how many people went missing during the five-month Russian occupation of the city. But the discovery of the massive graves, with hundreds of bodies, gives an idea of ​​what happened in the place. The United Nations said it would send a mission to verify the allegations.