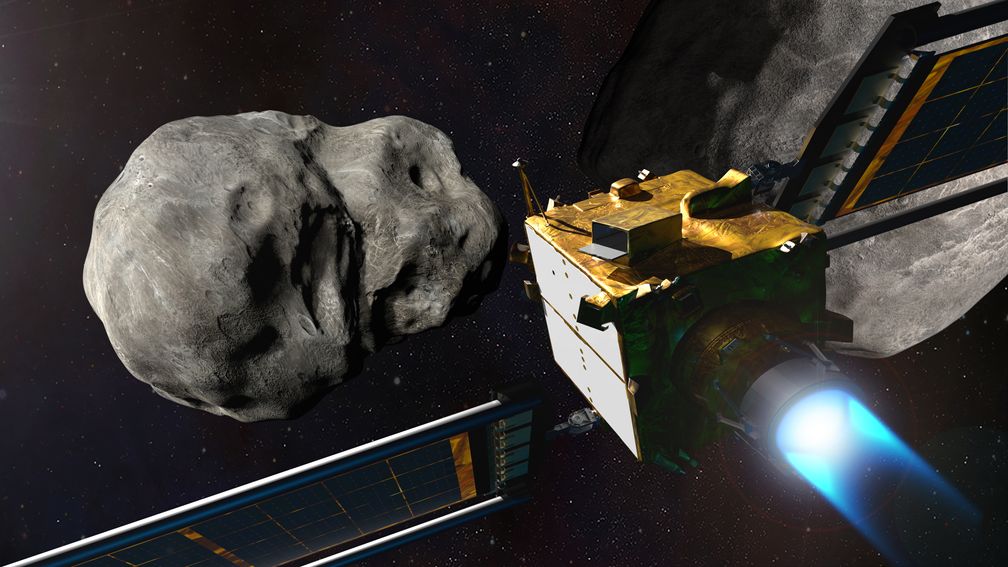 At 1:14 a.m. tonight, a high-speed US space probe will collide with a space rock. And that’s exactly the point. NASA is investigating whether such a maneuver can change the course of an asteroid that threatens to hit Earth.

Just to reassure you: there is no danger, this is a test. The target is Dimorphos, a 160-meter wide asteroid that orbits its bigger sister Didymos at about 750 meters. Together they revolve around the sun in 770 days. They are approaching Earth this year to within 10.6 million kilometers. The space rocks are not on a collision course with Earth, nor can a collision accidentally push them our way.

It is the first time that it is tested whether the earth could be defended in this way. DART, which stands for Double Asteroid Redirection Test, was launched in November 2021 for it.

Here’s how the journey to Dimorphos went:

The threat from space does not seem very great at the moment. Of all the asteroids that orbit the sun close to Earth, not one larger than 140 meters will hit in the next century.

But NASA also estimates that we don’t know half of all asteroids yet. In addition, even smaller boulders can still cause enormous destruction. And in the longer term, it is almost inevitable that another dangerous boulder will hit one day. That is why it is wise to test which defense works.

Scientists have already devised various defense methods. Many people will think of the movie Armageddon, in which a boulder is blown up with an atomic bomb.

DART makes the step from action film to reality, albeit slightly less spectacularly: the asteroid gets a ‘push’. By changing the course in plenty of time, a rock misses the earth at a considerable distance.

However, hitting the target is not so easy. “You try to hit something small that moves with something that itself is also moving at high speed,” says Michel van Pelt. This engineer at the European Space Agency ESA will bite the nail follow the livestream tonight.

DART is so far away that it takes 1.5 minutes for instructions to arrive. Because the probe flies at more than 24,000 kilometers per hour, this means that DART is already more than 500 kilometers further. And that while the target is so small that DART’s camera can only distinguish the rock from the larger rock Didymos it orbits an hour before impact.

NASA made a schematic representation of the mission’s purpose:

For the last four hours, DART therefore flies entirely on autopilot. A special instrument controls information from, among other things, camera images and the position of the stars in the sky.

‘To miss is the end of mission’

“If they miss the asteroid, then the mission is immediately over. Then it has completely failed. You can’t make a U-turn,” says Van Pelt. We’ll probably know pretty soon if it’s a hit. DART has an onboard camera that takes pictures up to 5 seconds before impact. Antennae on Earth stay in contact until the last.

Three minutes after the collision, an Italian mini-satellite flies by to take care of the damage. LICIAcube disconnected for this last September 11. Telescopes from Earth monitor the changes in the orbit of Dimorphos.

It is unclear what effect the collision will have. That depends on the composition of the asteroid. You may get a hard-on-hard bang. DART then creates a deep crater and a lot of material is thrown into space.

But asteroids are often not massive but very porous. DART would then disappear deep into the space rock without much effect. “If we knew what would happen, we wouldn’t have to do it,” says van Pelt. It is precisely the knowledge that is gained that should help to improve existing computer models.

With the HERA mission, the ESA will investigate the collision even more extensively in the coming years. This probe will travel to Didymos and Dimorphos in 2024 and will take a much more detailed look at what happened and measure how the orbit has changed.

In addition, if a deep crater is created, HERA can even view the interior of the asteroid – about which little is known. This will require some patience: HERA is expected to arrive at its destination in December 2026.