The street Wet Saw, in the Independencia neighborhood, was the first of 2022. It was cobbled and now it has hydraulic concrete. The municipal president of Guadalajara, Pablo Lemus Navarro, pointed out that 12.5 million pesos were allocated to the work, which was carried out between Salvador Quevedo and Sierra Morena, behind the University Center for Health Sciences (CUCS) of the University of Guadalajara ( UdeG).

Francisco Ontiveros, head of Public Works, explained that the municipality has almost 24 million square meters of pavement, asphalt, concrete and some dirt roads. He explained that Depending on the state in which they are found (critical, regular, good and very good), the type of attention program is defined: corrective of roads, preventive maintenance, streets without soil and hydraulic concrete.

In these tasks, the Guadalajara City Council includes comprehensive rehabilitation with lighting, universal accessibility and beacons.

For example, Ontiveros pointed out that on the borders with Tlaquepaque, Tonalá and Zapopan there are dirt roads that require hydraulic concrete. Other points are found in the Ferrocarril, Miravalle and Oblatos neighborhoods.

He stressed that on Vallarta Avenue, “raised potholes, boxes and a high-performance folder” were made so that this artery would not go into critical condition. 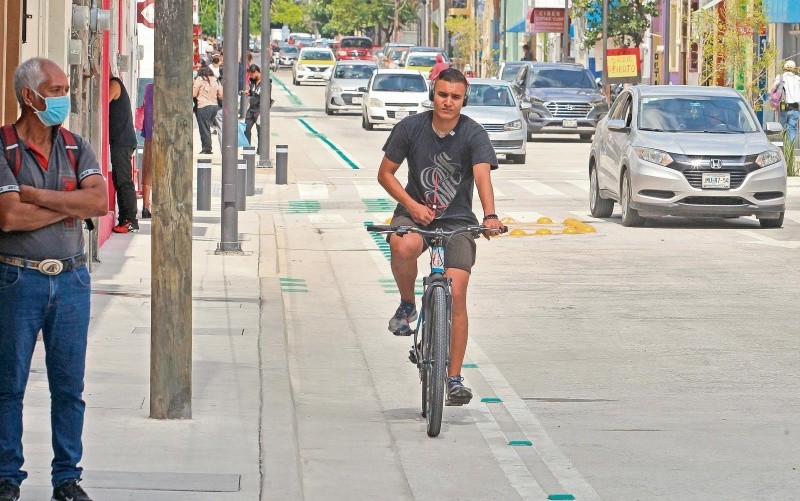 Rehabilitation of streets of Guadalajara is more than half complete

To offer a better quality in the streets and avenues of Guadalajara, the City Council carried out the intervention of 83 roads, with an investment of around 600 million pesos. With 65% progress, the completion of the works is projected at the end of November 2022.

The mayor of Guadalajara, Pablo Lemus Navarro, reported that actions such as the replacement of the hydro-sanitary network, placement of hydraulic concrete, sidewalks with universal accessibility, podotactile paving, placement of bollards, integral garrison, beaconing, vegetation, lighting and luminaires were carried out at the site. .

This is one of the areas with the most investment this year as part of the street renovation program, informed Francisco Ontiveros, director of Public Works of Guadalajara.

Although since October of last year they started the rehabilitation of Lazaro Cardenas, Technically, the comprehensive program began in March of this year and already records 65% progress in rehabilitated roads.

“All roads have components for pedestrian lighting, universal accessibility, tree maintenance and the creation of public spaces. In this way it is not only to cover potholes, but a comprehensive rehabilitation”, he explained.

Among these are Paseo Alcalde, Enrique Díaz de León Avenue, Hidalgo Avenue, Vallarta Avenue, North Independence Road, Plutarco Elías Calles and Constancia Street, between Revolución and Javier Mina. In Miravalle they work on the roads Arquitectura, González Camarena and Ramón López Velarde; and in Santa Tere on Angulo, Herrera and Cairo, Jesús García and Garibaldi streets. In the Center on Hospital Street, in the Ferrocarril neighborhood, Calle 12 intervenes, and in Oblatos, José María Iglesias Street, among others.

“As a municipality we have a very intense and intensive use of our roads and public spaces because many people from other municipalities come to their work or school spaces every day. That is why the 600 million pesos that we are investing have a metropolitan impact. We not only go to the big or main parts, but also in the small streets of the neighborhoods, ”he said.

They seek to increase pedestrian lighting

With a focus on improving visibility on sidewalks, The Guadalajara City Council seeks to add 13,000 new points of light in the city with the pedestrian lighting program.

Francisco Ontiveros, director of Public Works of Guadalajara, explained that the scheme helps to illuminate the vehicular stream and at the same time improves visibility for people who travel on the sidewalks.

“We are looking for a safe sidewalk, we are going to have 13 thousand new points of light. The lighting program with a pedestrian sense initially has to do with safety issues. Guadalajara is quite well lit towards the street, but not towards the sidewalks, we are all pedestrians, we have to walk on the sidewalk and we must do it safely. Since the previous administration we started with this program that includes pruning the trees, it is a commitment that has taken us time, but it is already beginning to be noticed”.

The Guadalajara official explained that they have made progress in the application of lighting with a pedestrian sense in the avenues Revolución, Federalismo-Colón, Vallarta and the vicinity of the Civil Hospitals. He commented that they have taken advantage of the interventions carried out in streets and avenues to incorporate the new lighting scheme along with the intervention of safe crossings, ramps and enabling podotactile guides. 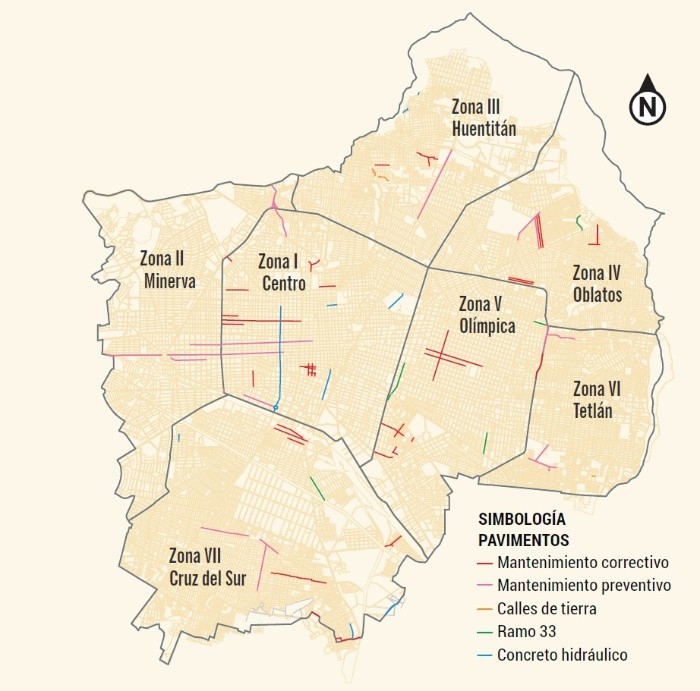 The City Council projects that the renovation of all the roads will be ready in November of this year. THE INFORMER/L. MARTINEZ

The director of Public Works, Francisco Ontiveros, announced that another 600 million pesos (MDP) are planned for the following year to rehabilitate more streets in the municipality, with the aim of starting next March.

“We are intervening the roads mainly in the East of the city. We know that during the rainy season the roads suffer a lot from the creation of potholes due to the passage of vehicles. But with this year’s investment and what will be for the next, there will be streets in a better state so that we Guadalajara can circulate safely, “he added.

He recalled that they will seek to have the same program with the same intensity and magnitude the following year. Therefore, the 83 streets that are already being rehabilitated this year must be ready before starting this new project.

He detailed that to choose the roads, a diagnosis will be made after the rains to reconfigure the state in which they were left after the storm and, with this, attend to the streets that are in a more critical state or that have a more intensive use.

“I don’t think there is a municipality in the State or the country that is investing so much money in the maintenance of its roads,” Ontiveros said.

He pointed out that although the specific roads to intervene have not yet been defined, it seeks to address those that end up made of earth so that at the end of the administration they are no longer in this state, as well as continue with the preventive and corrective maintenance of the asphalts in Guadalajara.

43 roads will have corrective maintenance.

19 streets will have preventive maintenance.

4 More roads will be intervened in their entirety, as they are dirt roads.

4 roads will be built by the Government of Jalisco.

With the rehabilitation of streets, the municipality also creates and rehabilitates public spaces, said the director of Public Works. For example, in the streets between Calzada Juan Pablo II and Periférico, where there is a lot of public transport traffic.

“We are taking advantage of the fact that we are changing that old asphalt and the underground networks to also create a linear park. Another very specific case is Paseo Alcalde, from Libertad Street to Ninos Héroes Avenue, where the public space is being reconfigured, since it was an avenue in deteriorated and narrow conditions. Today there are already wider sidewalks and we create a public space for everyone”, he detailed. 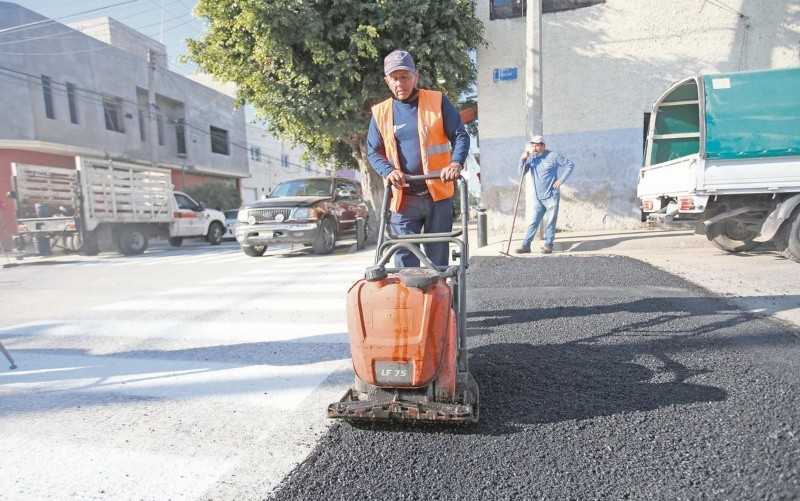 Citizens can report roads in poor condition to the City Council. SPECIAL

Although the Guadalajara City Council will be in charge of evaluating the streets of the municipality after the storm, residents who use them daily can report those roads that they observe in poor condition by calling 3338-3750-00, at extensions 5202 and 5203.

Pedestrian. That the pedestrian can circulate safely on the sidewalks with the conditions that are being added: universal accessibility, lighting towards the sidewalk, and that they are passable for people with disabilities.

Motorists. That those who use a vehicle make their transit safer with illuminated streets, without potholes and well marked.

Spaces. An important part is the creation and maintenance of new public spaces, such as linear parks, the Paseo Mayor, expanded sidewalks, more furniture, and in some places the option for citizens to access the free Wi-Fi network.

What do you think of the conditions of the pavements in Guadalajara?