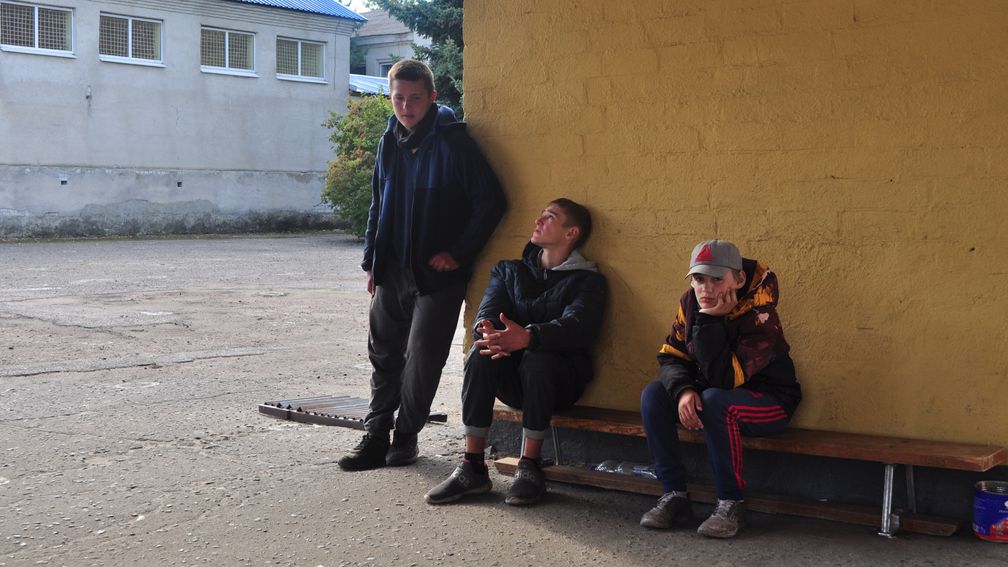 Three boys ride by on a bicycle, laughing. One on the handlebars, one on the saddle and one on the back. Normally Anton (13), Zachar (11) and Artem (14) go to the same school. But classes have not resumed yet as Ukraine is anticipating attacks on the village.

Until a few weeks ago, they had classes at Shevchenkove’s Second Lyceum – when it was still occupied by Russia. A few things were different than they were used to. Lunch was no longer free. But especially the education itself has been adapted, the friends say as they stand outside the gates of the school. “Everything was in Russian, you were no longer allowed to speak Ukrainian”, Anton summarizes.

What the boys in Shevchenkove say is still happening in the areas where so-called referendums have been held in recent days. Ukraine accuses Russia of ‘Russifying’ the population in occupied territory through propaganda, including in a new curriculum in schools.

Russian Education Minister Sergei Kravtsov already announced this summer that education would be persecuted “in line with Russian standards”. He also said that Russia had begun “further integration” of schools by training teachers and supplying new textbooks.

Furthermore, Russia had teachers sign a document in which they agree to the new education. That happened here too, says Anton. Their Ukrainian teacher had to teach Russian. From occupied territory, stories are coming out that teachers are being pressured to continue teaching and follow the new curriculum.

Education in the occupied territory is part of a long-standing language and culture battle between Russia and Ukraine. President Putin claims that the government in Kiev is committing ‘genocide’ against ethnic Russians and the Russian-speaking part of the population. And that Ukraine is responsible for the suppression of the Russian language and culture. Putin denounced in one of his speeches that Ukrainian children are not taught that Russia and Ukraine belong together.

Russian education about the war in Ukraine is of course also reflected in Russian propaganda, concludes Oleksi Lytvynov, the head of the education department of the Kharkov region. “Children are taught, for example, that the Maidan Revolution of 2014 was a coup.” That year, the country’s pro-Russian president was impeached after it emerged that he wanted to block a trade deal with the EU.

Lytvynov is not surprised that Russia does this in schools. The occupied territory is treated as Russian territory, and with the education Moscow is trying to further annex the region, the administrator says. “This is a form of influence with which the Russian state tries to suppress the population.”

The textbooks to be used, including a Russian history book

A Russian literature book with a poem about Moscow

Traces of Russian education can be seen in the school building of the Second Lyceum. At the entrance lies on the floor a cardboard poster that hung on the wall during the occupation – with the flag and the national anthem of Russia.

In a hall there are large piles of books still in their plastic packaging. Russian schoolbooks, which had arrived shortly before the Ukrainian advance and were therefore not used. Mathematics and computer science, but also Russian history and language.

Anton takes a literature textbook from the pile. On the front are portraits of well-known Russian writers such as Aleksandr Pushkjin. The work of Ukrainians is not to be found in the book, except that of Nikolai Gogol. He was born in the 19th century in a part of tsarist Russia that is now Ukraine. Both countries disagree on whether the writer was Russian or Ukrainian.

Yes, during the occupation it was scary to go to school, the boys agree. You didn’t dare speak Ukrainian, because there were armed soldiers around the school. Nevertheless, despite the new Russian curriculum, they were happy that the lessons continued. “Then we could at least see our classmates and have fun,” says Anton. They don’t know when they can go back to school. But the Russian books will remain in the plastic.