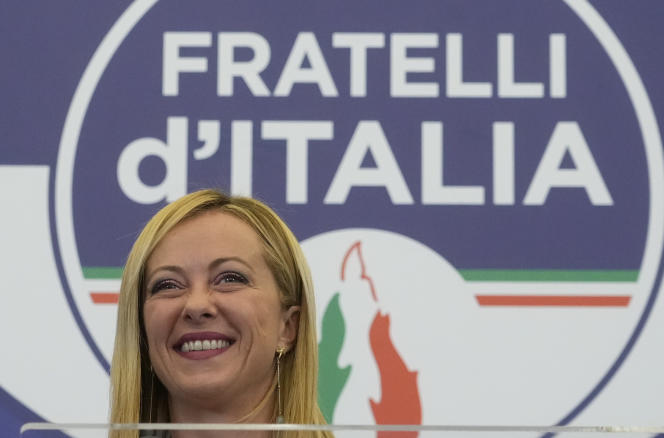 Can a political earthquake in Italy give rise to a murmur in France? Following the triumphant victory of Giorgia Meloni, leader of the postfascist party Fratelli d’Italia, in the Italian legislative elections, the executive power showed the greatest caution. “I am not going to comment on the democratic choice of the Italian people, explained Elisabeth Borne, Monday September 26, at the microphone of BFM-TV. Now it belongs to the President of the Republic [Sergio Mattarella] to appoint the chairman of the board. ” Re-questioned, the Prime Minister simply defended the role of Ursula von der Leyen, the President of the European Commission, which consists ” in recalling that in Europe we carry values, and that each State must be part of the framework of these values ​​– the rule of law, human rights, respect for the right to abortion”.

The reaction of the French executive is a notch below that of European neighbors. For the Spanish Minister of Foreign Affairs, José Manuel Albares, “populism always ends in disaster”; Berlin expects Italy to remain “a very pro-Europe country”, according to a German government spokesperson. In France, only the Minister responsible for transport Clément Beaune, called frankly, on September 24 on Twitter, to never forget “where does the flame taken up by the FN come from: it is the flame which comes out of the tomb of Mussolini, the symbol chosen after the war by the Italian neo-fascists. It is still the emblem of the National Rally”. The former Secretary of State for European Affairs stressed on Monday that Emmanuel Macron castigated “those who promise hatred, division or national withdrawal”, at La Sorbonne, during his speech on Europe, there are five years to the day.

On the eve of an essential vote in #Italy, let us never forget here where the flame taken up by the FN comes from: it is the… https://t.co/mQGrbRcgz3

Meanwhile, in unison with her populist and sovereigntist allies in Europe, Marine Le Pen warmly congratulated Giorgia Meloni and Matteo Salvini, saying that “the Italian people have decided to take their destiny into their own hands” in the face of “a European Union undemocratic and arrogant”. On the right, the leaders of the Les Républicains party reject the Italian example of an alliance with the extreme right, but embrace its concerns. “The real danger for Europe is not Giorgia Meloni, declared LR MEP François-Xavier Bellamy, it is that illegal immigration has exploded in Italy. »

Within the executive, on the other hand, we avoid expanding on what constitutes a first in Italy since 1945. Monday, in the middle of the afternoon, the Elysée let it be known in a brief statement to the Agency France-Presse that Emmanuel Macron “respects” a “democratic and sovereign choice”. “As neighbors and friends, we must continue to work together,” he added. In the office of the Minister of Foreign Affairs, Catherine Colonna, this discretion was explained by the need to “stay united” in the face of the energy crisis and the war in Ukraine. Government sources are convinced that the coalition formed by the post-fascist Giorgia Meloni, the far-right leader Matteo Salvini and Silvio Berlusconi’s right will not upset the European gains – the euro, the transatlantic alliance and firmness in the face of Vladimir Putin constituting “the essential” in times of turbulence. “I want to believe that the line that was built by Mario Draghi has something irreversible in the short term in cooperation with Europe,” said Emmanuel Macron on September 12.

You have 32.27% of this article left to read. The following is for subscribers only.