NASA said Monday it will move its giant moon rocket from its Florida launch pad and return it to the assembly building to protect it from advancing Hurricane Ian, whose strengthening winds are expected to hit the Kennedy Space Center later in the week.

Hurricane Ian School Closures in Central Florida: Hurricane Ian is expected to hit Florida as a powerful storm, and school districts are keeping an eye on how the weather will affect classes. 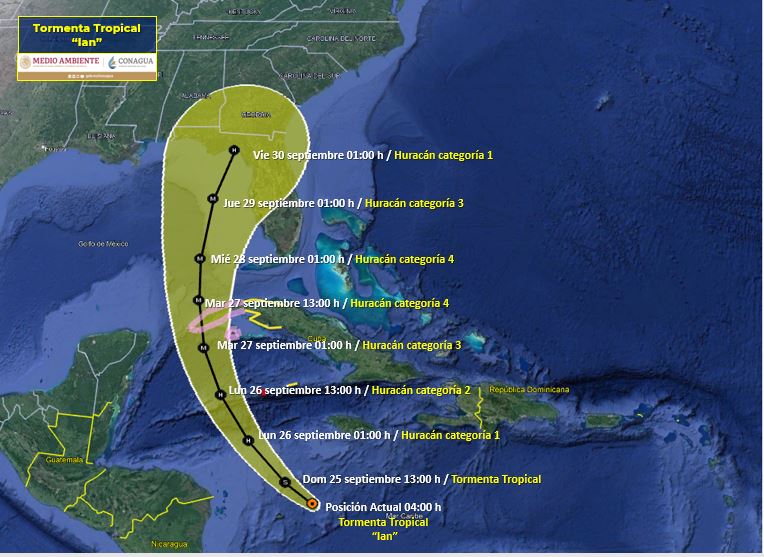 Beginning Monday afternoon, September 26, the Cayman Islands government downgraded its Hurricane Watch to a Tropical Storm Watch, but the forecast worsened for Cuba and the west coast of the Florida panhandle. “The west coast of Florida is incredibly vulnerable to storm surge,” said Jamie Rhome, acting director of the US National Hurricane Center.

With particular attention to the city of Tampa and its outlying area, home to some 2.5 million people, the state’s governor, Ron DeSantis, warned that Ian posed a risk of “dangerous storm surge, torrential rain, flash flooding, strong winds, strong, dangerous sea and isolated tornado activity. In Tampa, the impact of Irma is still remembered, which was headed for Miami but was diverted at the last moment and hit the bay as a hurricane 2 in 2017.

Ian could arrive with the same category, if the forecasts are met: he would hit the western part of Cuba, from the Isla de la Juventud to the northern coastal towns, but especially including the city of Pinar del Río, which with its metropolitan area of 11 municipalities concentrates 731,000 people. It is estimated that it will impact Cuba on Tuesday morning and Florida, between Wednesday and Thursday. The biggest risk for Tampa is on Thursday, with waves up to 10 feet (3 meters).

“It’s time to stop looking on the internet and hoping it doesn’t happen,” Rhome told CNN. “It is time to start acting. This is almost the worst angle of approach, because it’s coming from the southwest and it stalls.” If the speed at which the cyclone advances is low – on Thursday it could be three times slower than today – the impact lasts longer in the region, with more devastating effects.

Tampa and the bay are already on Hurricane Watch and Storm Surge Watch, preventively. The evacuation has been ordered, from Monday the 26th at 6 p.m. local time, of all residents in the area of ​​greatest danger in Pinellas County, whose capital is Clearwater and its largest city, St. Petersburg. The other two high-risk areas also have an evacuation order from 10 a.m. on Tuesday the 27th.

A little further east, Hillsborough County, where Tampa is located, ordered the evacuation of the most exposed area and suggested that the next strip consider doing the same. From 2 pm on Monday the 26th, all the shelters in the region were open.

Finally, in Manatee County (south of Hillsborough) the order is firm for the most critical area from 8 in the morning on Tuesday the 17th, with the closure of all parks and nature reserves.