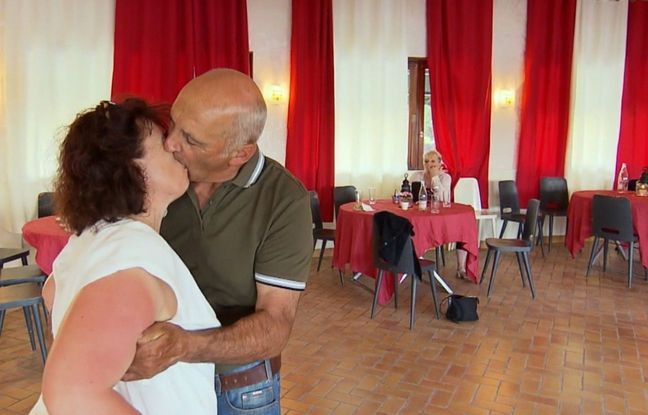 That’s it, we got it! What ? The first galoshe of the season. We had to wait until the very end of the sixth evening of Love is in the meadow, Monday, to see it, the tongue salad (sorry for the image, but it’s the most relevant), as drooling as it is passionate , between Jean and Laurence. The M6 ​​cameraman did not miss a crumb of lettuce. He was on the dance floor, immortalizing the slow of the couple in the making when, suddenly, the lovebirds could not contain their passion.

It was as beautiful as a Renaissance painting, golden ratio and all: she and he in the foreground, mouths glued together and, seated at a table in the background, Nathalie, the fallen suitor. She discovered before her own eyes what she feared a few moments earlier: the heart of the farmer leaned so well for his dark rival. How far away now seems the morning squabble between the two women over a rice salad prepared for a regiment.

The risk of the “friendzone”

Guillaume, the Limousin farmer, is worried. His two suitors, Margot and Noémie get along too well. They carpooled from Hauts de France. He has a preference for Noémie. He doesn’t know how to tell Margot, who seems very comfortable at home. The situation makes him uncomfortable. At 28, he has only known flirtations and does not know how to manage. The production called Karine Le Marchand to the rescue. On the phone, the host explained to Limougeaud that by dint of delaying in deciding, he “risks falling into the friendzone”, this zone in which “we prefer to just stay friends”.

Alexandre, the Norman, has made his choice. He projects himself as a couple with Anaïg. “Emotive and sensitive”, Laura senses him and sheds a few tears. When the farmer confirms to her what she feared, she puts on a good face. “I realize that it did not correspond to me. I leave without any regrets, ”she says. She also insists on honoring the invitation to the couscous evening anyway. Except she won’t swallow a semolina seed. At the time of going to the table, his chair is empty. Alexander goes in search of Laura and finds her in tears. “I didn’t know that I wasn’t going to be able to control my emotions,” she justifies herself. The Norman then accompanies her to the farm. And Anaïg in all this? We do not really know. She claims to be “happy” to be the farmer’s chosen one. But his body language doesn’t seem to say the same thing. Is it just shyness? Or the sign of disinterest?

At Alain, in Allier, the equation is even more complicated since he has three suitors at home. Its namesake, Alain, is in the sights of the other two, Gilbert and Jean-Noël. If they knew that the Auvergne farmer actually had a preference for him, they might have it even worse. They criticize Alain for putting himself forward too much, and no doubt for being too comfortable, joking, exuberant.

Gilbert, he also decides to leave. “Your way of working doesn’t suit my way of working,” he explains. He obviously did not understand that it was a dating show and not a job interview. Jean-Noël mourns his departure but quickly dries his tears. During a car trip, he can finally talk alone with Alain. He reveals that he was a DJ for six years, and also a volunteer firefighter. The farmer is amazed, begins to see him in a new light… Are the cards being redistributed?

“I have the underpants that compress”

Agnès did her speed-datings. The show’s first beer brewer, 56, comes from the Grand-Est. She regrets not having had a crush. It must be said that between a suitor who writes him a poem where he says he has “the underwear that compresses”, another who must have believed himself to be in the cast of the Best pastry chef since he offers him a tasting of pies and all the others who take it into their heads to make her dance (badly), we are not far from a romantic comedy. She, she is a blue flower, she is looking for her prince charming.

Willy-nilly, she decides to invite Christian to her home. He defines himself as an “epicurean” with a “strong character” and comes out with definitive sentences such as: “There are no foreigners, there are only people I don’t know. She also invites Eric, who announces that he will retire in a year. His strong point: his pink shirt. Agnès “likes men in pink”. Another good point: he likes to make surprises. Will it be a gift for Agnès?