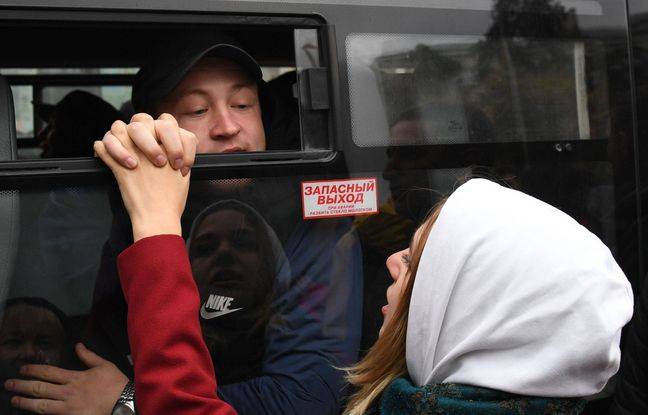 They are considered deserters by the regime, and risk up to ten years in prison. However, according to the Russian socio-political newspaper Novaya Gazeta 261,000 men have already left Russia since the head of the Kremlin announced the mobilization of reservists to fight in Ukraine last Wednesday. Faced with the fear of being called upon to fight, many men seek ways to avoid it. Last week, for example, Google searches for “how to break an arm” in Russia were on the rise. For the past few days, testimonies from Russian citizens who have left the country have been pouring in. “I don’t want to kill my Slavic people, my brothers, my sisters”, told AFP a former soldier who wishes to remain anonymous from a modest hotel room in Finland, where he arrived on Thursday. “I have a physical disgust to be in the presence of our Russian citizens who support the war,” he adds. “I’m leaving because I’m not crazy and I don’t want to die,” a 30-year-old told BFM TV.

Tensions have risen a notch in the country while according to the NGO OVD-Info, more than 2,300 people were arrested during actions against military mobilization. On Monday morning, a man opened fire at a Russian army recruitment center in Siberia, seriously injuring a soldier who worked there. Another set himself on fire at a Russian train station. If Moscow assures that no decision has yet been taken on the borders, observers report that the Russian army is deployed on the Georgian border to block the escape of potential conscripts.

For its part, Finland announced on Friday that it would “significantly restrict” Russian access to the Nordic country in “the coming days”. Already 8,572 Russians entered on Saturday and 8,314 on Sunday. “Many are aware of the dramatic human blow of the war, that they are sent to the pipe breaker”, comments to 20 Minutes Nicolas Tenzer, specialist in strategic and international questions and teacher at Sciences po. Can this escape, mixed with an increasingly noisy protest, make us go beyond, shake the walls of the Kremlin?

A refusal of mobilization, not of war

This refusal to be sent to the front reflects various disputes, the main ones concerning people who are afraid because they are aware of the tragedy that awaits them. It is an opposition to putting one’s life on the line in a conflict where, today, the Russian army is in difficulty on the ground and many men (55,500 soldiers according to kyiv and 5,937 soldiers according to Moscow), have already left their lives. It is the terror of families and loved ones not to have the chance to see their father, their brother, their nephew, their fiancé, their husband return safe and sound from the fighting.

For others, according to Nicolas Tenzer, this call for mobilization created a kind of spark in a population that accepted or was resigned to the repression, corruption and inequalities that punctuate Russian society. It is then a more global challenge to the Putin regime which until now was “locked in a kind of apathy” until this click “which leads them to reflect on what the regime is doing”, adds the specialist. He believes that in the vast majority, “it is not a protest against the war itself and the crimes committed by the Moscow army against Ukrainian civilians”.

“If some do not know about it because of the control of the media, others, who manage to inform themselves through the international media, refuse a reality that they do not want to see, there is no protest , guilt or shame with regard to what the regime is doing in their name, abounds Nicolas Tenzer. There is no compassion for the Ukrainians, there was no more to condemn the crimes committed in Syria for example”. “The vast majority of Russians are passive or in tune with Kremlin policy,” adds defense consultant Waël Pascha. on Twitter. Here it is the mobilization that is contested. »

A dispute that can make Putin tremble?

If the regime is disputed, can it then be weakened by the anger of the people? “The whole issue is to see if this armed protest will take root, spread and contaminate the Russian regime itself”, underlines Waël Pascha. This is indeed the heart of the problem. Because if Vladimir Putin can be further weakened than he already is by the successive defeats in Ukraine, “the security and repressive apparatus remains effective and the demonstrations still in the minority”, points out Nicolas Tenzer. Especially since no leader appears at the head of the movement, given that all political dissidents are either in exile or in prison.

If the Russian people can then become more demonstrative in the absence of support for the power in place, the revolution is still far away. The majority of the inhabitants, before February 24, did not particularly support the invasion of Ukraine, but were resigned. Only a very small minority opposed it.

The danger for the Russian head of state comes more from a threat in circles inside the Kremlin. But there, no way to know if it even exists in an embryonic way, and Nicolas Tenzer considers that its probability is, at this stage, low. And even if Vladimir Putin were overthrown, who would take his place? “The regime would not change radically even if it could end the war in Ukraine”, assures the specialist.

The symbol of failure

The announcement of the mobilization on Wednesday was accompanied by the hasty organization of referendums in the Ukrainian regions occupied by the Russians. An acceleration that reflects real difficulties on the ground, as does the call for reservists. And this exile of Russian men who are afraid of being sent to the front reveals, there too, “a technical failure and not only in the process”, underlines Nicolas Tenzer. The Kremlin also recognized, on Monday, “errors” during the mobilization.

Moreover, it is not certain that these men who came to reinforce the ranks of the army on the spot really weigh in the balance in favor of Russia. “Among these mobilized people, many are not fit for combat, they do not have quality weapons available, they are not trained…”, lists the teacher at Sciences po according to whom “this is not going to change the course of the war”.