Security in Jalisco: Man dies after rollover on Guadalajara-Tepic highway

After leaving the highway to Nogales and overturning the truck in which he was traveling, a driver died pressed between the iron bars of the vehicle that ended up inside a nursery.

The accident was reported via the emergency number 911 to the Municipal Unit of Civil Protection and Firefighters of Zapopan, around 2:40 a.m. on the Guadalajara-Tepic highway, at the height of the Tres Ríos Residencial Fraccionamiento.

The Zapopan firefighter, Juan Pablo González, explained that there were no people inside the nursery, in addition the victim, who was trapped inside the car, was 30 to 35 years old.

The Ford Explorer truck, in blue, was the only one involved in the incident, rescuers said.

The firefighters waited more than three hours for the Public Ministry agent to give authorization for the extraction of the victim’s body.which was stuck between the irons of the car. 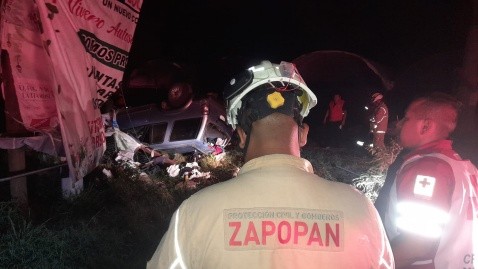 Subsequently, the body was handed over to Forensic Medical Service personnel, who transferred it to the metropolitan morgue where they performed the corresponding law autopsy.