After registering this Friday another earthquake of magnitude 5.5 with epicenter in TecómanColima, the National Sinological Service (SSN) reported a new 4.1 earthquake in Santiago Papasquiaro in Durango. This is another aftershock of the 7.7-magnitude earthquake recorded on Monday, September 19.

Through its Twitter account, the National Seismological Service reported that the magnitude 4.1 earthquake was reported on September 23 at 3:18 p.m. in the southeast of Santiago Papasquiro. So far no damage has been reported. 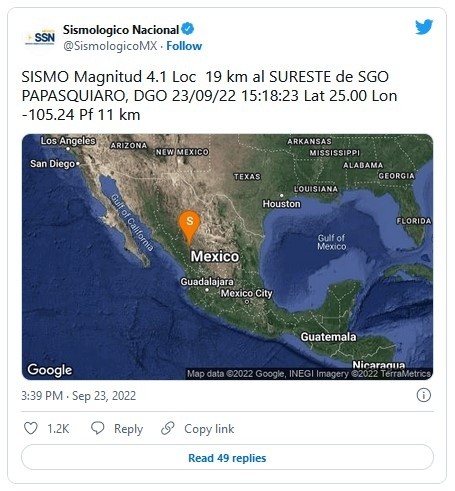 According to the publication of his official account until 4:00 p.m. this Friday 1,681 aftershocks have been recorded of the earthquake last Monday of 7.7 occurred in Michoacán. The strongest aftershock was recorded in the early hours of Thursday, which had its epicenter in Coalcomán, Michoacán and was 6.9 degrees.

Barely a week after they were called up: “The first mobilized soldiers have already died”

Sedena: They hack the military body and extract material on national security issues