AMLO and Jorge Ramos: These have been their “encounters” due to security figures

There have been several “encounters” between the journalist Jorge Ramos and President Andrés Manuel López Obrador, the latter took place today at the morning press conference where there was an energetic debate to clarify whether or not this government has been the most violent in the history of Mexico.

López Obrador and the “other data”

In his press conference this Thursday, and when rebuked by Jorge Ramos, who at the beginning of his comment said: “I have to start with bad news: your government is already the most violent in the modern history of Mexico,” to which López Obrador refuted. “He didn’t agree with you.”

“This is what Mr. President means, despite the figures you have given us, is that your security strategy has not worked. Militarization has not worked, your proposal for the National Guard, that is why many are opposed to her and the idea is that ‘hugs not bullets’, in the end they have fired more bullets; the problem is that if they don’t correct it they are going to get much worse; in the end, when you hand over power, on October 1, 2024, it will 191,000 deaths,” he questioned. 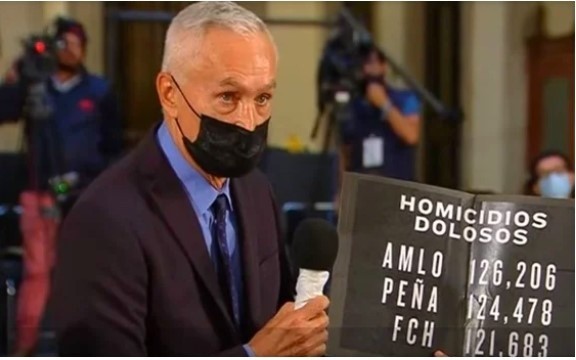 Increase in murders in Mexico

Something similar happened in April 2019, when the journalist about the increase in murders in Mexico, to which he replied that the situation had already been “controlled”.

Ramos questioned again before AMLO’s refusal, which made him invite him to review the figures that were being projected in the National Palace and in front of the attendees.

The “forbidden fruit” that the 4T inherited

Since 2021, Ramos has debated a discrepancy in the official crime incidence figures in Mexico.

In July of last year, López Obrador acknowledged that it has not been easy for him to face the rise in intentional homicides in the country because “it was a rotten fruit” that his administration inherited and, as he has always said, he defended his policy of ” hugs and not bullets” to fight crime.

On that occasion, he also got involved in another debate with the Univisión journalist about the official figures of criminal incidence.

“You can’t say that you have 100 deaths a day and that this is a success,” the journalist questioned him.

“No, of course it is not an easy matter, I already explained it, that a rotten fruit that we inherited. It is not that I am unreasonably blaming previous presidents, but it is in the public domain that the management of security was in charge of delinquency and this has been going on for a long time,” replied the President.

“But there are no results, what happens is that you present it as a success, as an achievement, it is not. In December 2018, his first month as President, he had 2,892 intentional homicides, the first month; and in May of 2021, which just passed, had 2 thousand 963. There is no change, “he insisted.

“Yes, there is a change. I’m going to give you another piece of information (…) That’s why we don’t agree, JorgeLopez Obrador replied.

Last May, López Obrador assured that Mexico City is safer than cities like New York in the United States. It was then that the journalist Jorge Ramos said he had other information.

The also host of Noticiero Univisión made a comparison of the number of murders registered in 2021 between New York and Mexico City and the results were exposed through his personal Twitter account.

“Who says that Mexico City is safer than New York? These are the data I found: In 2021 there were 485 murders in New York against 1,638 in Mexico City, according to official figures. The violence continues being the great fault of this government”, wrote the author of the book “Tierra de todos”.