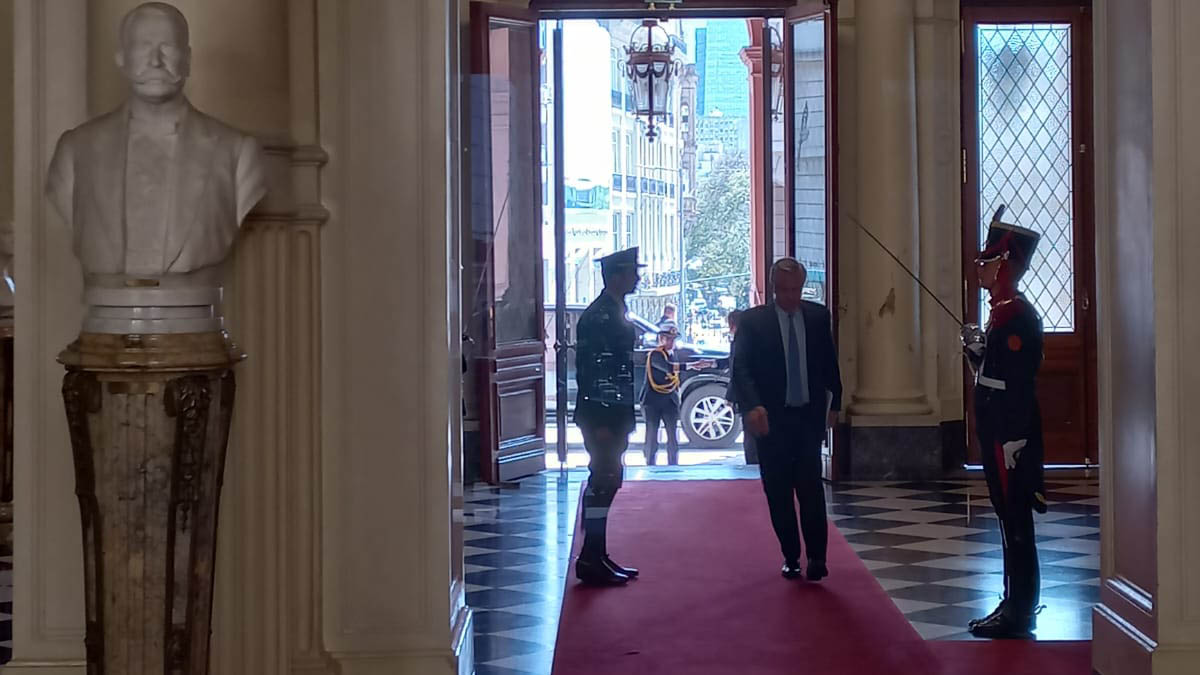 Alberto Fernández arrived at the Casa Rosada after 11 o’clock, almost at the moment that Cristina Kirchner began her defense plea in the Vialidad case

This noon, the plenary session of the ruling party listened carefully to Cristina Kirchner’s long-awaited statement on the third day of her defense. Without an official agenda precisely because of this central political event for the Government, Alberto Fernández listened to the entire speech, full of criticism of Justice, in his office at the Casa Rosada, accompanied only by his friend and Secretary General of the Presidency, Julio Vitobello. Later, he expressed satisfaction to his collaborators with the statement, in particular for a passage that coincided with his own appearance as a witness in the same case. However, in her environment they slipped complaints about the excessive centrality that the Vice President is giving to the judicial agenda, an issue far from the concerns of citizens.

Alberto Fernández spent the first part of the morning in Olivos, alone, until he received Carla Vizzotti to discuss issues related to the Ministry of Health. After 10:30 am, he went to the Government House, where he had not planned any official activity in response to the centrality that the oral trial that investigates irregularities in the public works granted to businessman Lázaro Báez in Santa Cruz would acquire. The hearing had begun at 9:30 am, with the statement made by Cristina Kirchner’s lawyer, Carlos Beraldi.

The head of state arrived at Balcarce 50 by helicopter just after 11 o’clock, just as the argument was about to begin, and followed the defense of the former president from his office. Before the allegation, he had not spoken with Cristina Kirchner, with whom the relationship remains cordial, but distant after the long months of extreme tensions that, say those who know them, lessened. They also did not communicate afterwards. Instead, the deputy surrounded herself in the previous days and hours with her lawyers, the Minister of the Interior, Eduardo de Pedro, and the Deputy Minister of Justice, Juan Martín Mena. 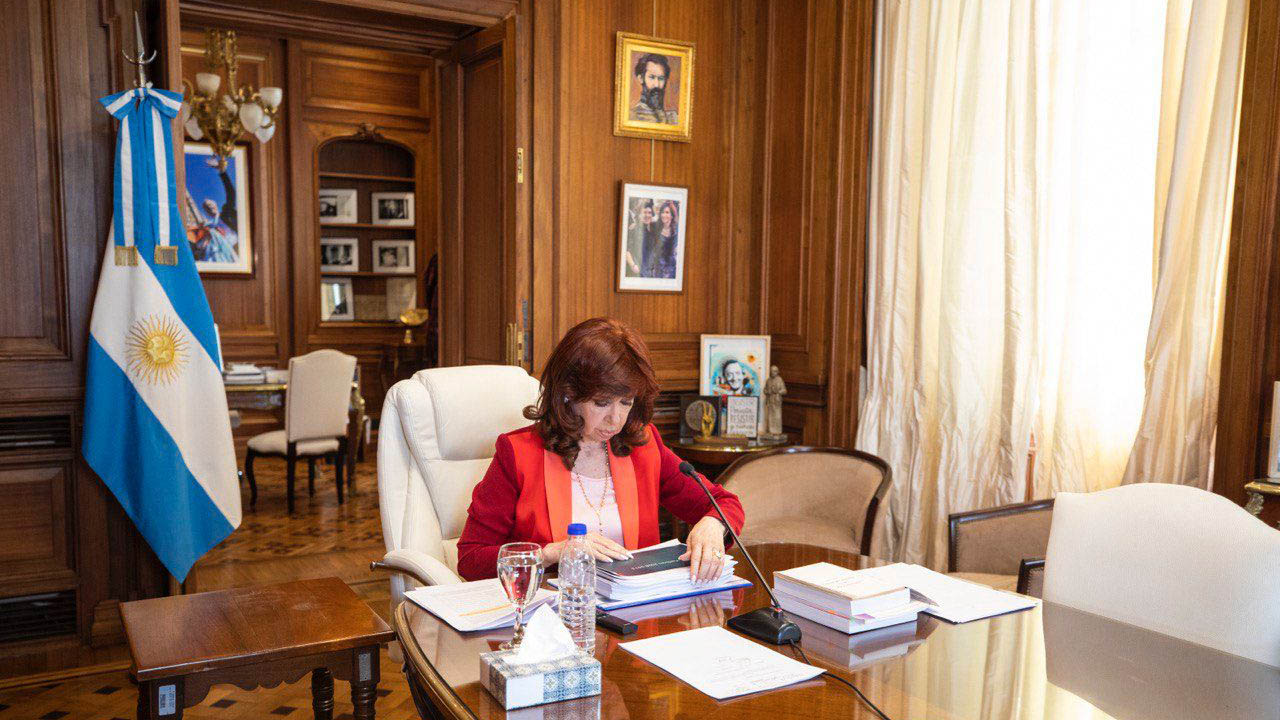 The Vice President spoke from her office in the Senate

Although oblivious to the intimacy of CFK, the President expressed his agreement with what he heard this afternoon. “Everything that Cristina said seemed very appropriate to her,” said officials close to the president who heard some of the head of state’s comments. And they considered that the message was “much more technical than political”, in contrast to the one he had given on August 24 during a previous presentation by Beraldi, where he asked the prosecutors in the case, Sergio Mola and Diego Luciani, to “grab the Constitution, the administrative law books and the penal and procedural code”. “They don’t bite”, he had ironized at that moment.

In the Casa Rosada, they highlighted, in particular, the passage where the Vice President denounced the partiality of the Justice with respect to the responsibilities of other officials during the alleged “illicit association” to divert funds from public works at the hands of businessman Lázaro Báez. In particular, in reference to the role of the Cabinet chiefs during the period investigated. “If they give me a choice between this (Constitution) and the one from 1953 made by Juan Bautista Alberti, I’ll stick with Alberdi’s,” CFK said today, referring to the responsibilities of the Chief of Staff under the Constitution, and recalled that he is the coordinating minister who is in charge of sending the Budget to Congress.

Close to Alberto Fernández, they recalled that this section coincides with the statement made by the President as a witness, in the same case, on February 15, in reference to his own role in the government of Cristina Kirchner, which Aníbal Fernández, Juan Manuel Abal Medina and Jorge Capitanich. “The illicit association thing is outrageous, which has neither head nor tail. The Chief of Staff is central in the games, and they leave him out of the trial, something that has neither head nor tail and is done on purpose,” said a very high official, who considered the argument “central.”

In any case, beyond the coincidences, the President had not published, at the time of publication of this note, a message of public support for the Vice President. Despite the fact that yesterday at the Casa Rosada they had announced that Alberto Fernández would express support for Cristina Kirchner via social networks. The one who did speak out was the spokeswoman, Gabriela Cerruti, who published a video that shows her in the Government House in front of a screen watching the statement with the heading “Persecuted by a woman and a Peronist” and, in the background, the song by Los Caballeros of the “Avanti morocha” burning.

Cristina Fernández de Kirchner: “We are facing a clear case of prevarication”

They also agreed with the vice that the sentence “is already written.” “We see little chance of her being acquitted, but we are hopeful,” they said.

After listening to Cristina Kirchner, the president prepared to receive two of his most trusted officials: the deputy chief of staff, Juan Manuel Olmos, who until a few months ago served as his Chief of Advisors and the head of the AFI, Agustín Rossi, with whom he speaks daily. He also communicated by phone with the Minister of Foreign Affairs and his right-hand man, Santiago Cafiero, who is in Córdoba. “We have been working since he arrived at Rosada, in different management meetings,” they said.

For the rest of the day, as Infobae advanced, Alberto Fernández had no more published activities. In fact, last night, in the official agenda of the day that is released daily, they had not specified events or detailed meetings, unlike the dynamics during the rest of the year. On the other hand, all of today’s meetings, a key day crossed by Cristina Kirchner’s judicial agenda, were kept in reserve. But in the afternoon it was reported that today he will record a message on handling the pandemic for the opening of the meeting of the World Health Organization (WHO), to which he was invited and will attend virtually.

Yesterday was also a day crossed by issues related to Justice, by the debate that the president of the Senate imposed on the premises despite the strong discontent shown by the opposition to debate on tables the expansion of the Supreme Court from 5 to 15 members . In the end, with the agreement of dissident senators, but occasionally allies, the Front of All obtained the half-sanction for the project, which will now go to the Chamber of Deputies, where approval is shaping up to be more complicated.

The judicial agenda was transformed this week, as expected, into the governing axis of the ruling party. It was at the request of Cristina Kirchner and La Cámpora, who through their networks sought to give centrality to the Vialidad cause. In the moderate sector of the Government, although they said they supported the defense of the vice, they were concerned about the excessive attention that the ruling party is giving to this issue, above the problems that really occupy a place of importance for the voters, according to most of the polls where, on the other hand, the leaders of the Front of All maintain high levels of negative image.

Cristina Kirchner asked to investigate the prosecutors of the Vialidad case for malfeasance and linked the legal cases with the attackCristina Kirchner spoke of the attack against her: “No one can believe that this band has the intellectual authorship”

Piura: earthquake of 6.1 was recorded in Sullana this morning