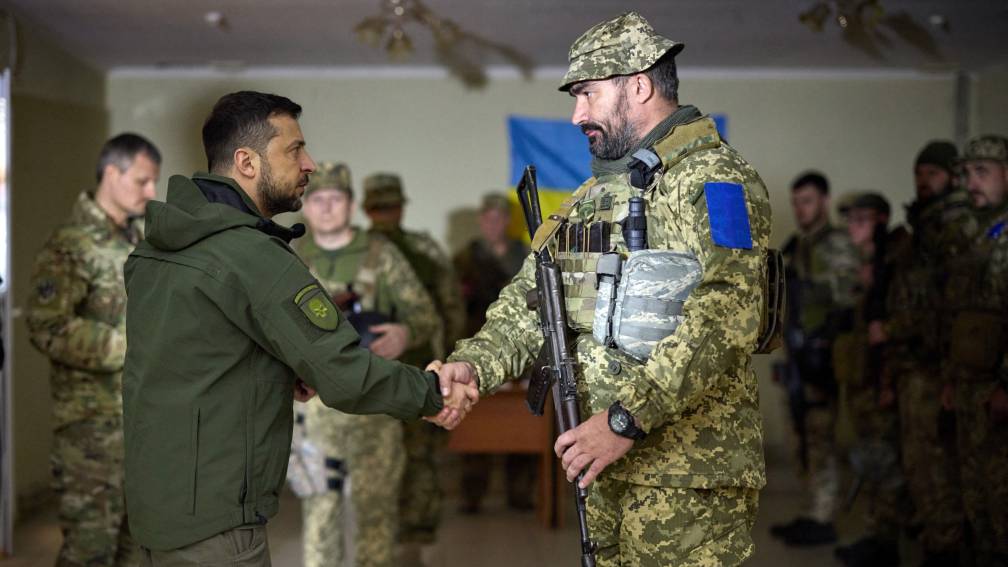 After the rapid recapture of much of the Kharkiv region earlier this month, the Ukrainian army continues its advance in neighboring Lugansk. That region fell completely to the Russians in the summer, but Ukraine now says it has liberated the village of Bilohorivka and is approaching the occupied city of Lysychansk.

“You may think that after a series of victories, we now need a breather,” Ukrainian President Zelensky said in a video speech recently, “but there will be no breather. We are now preparing the sequel, because Ukraine must be liberated.” How is it that Ukraine has been able to make significant gains in recent weeks and Russia is being pushed back, even though the armies are at least evenly matched on paper?

According to defense specialist Dick Zandee of the Clingendael research institute, the Ukrainian army leadership is now trying to make the most of the winning mood among the military after the successful advance in Kharkov. “There are more and more troops trained in NATO countries, they are getting more and more Western weapons and their morale is good. Ukraine also benefits from advancing quickly now, while the weather is still fine. Sometime this autumn the weather will get worse , the ground will become wetter, and you won’t be able to progress as quickly.”

For the Russians, according to Zandee, the problems they have been facing from the very beginning are becoming increasingly acute. “Their morale is very low, they have staffing problems and now even have to get soldiers out of prisons, and there is also an increasing shortage of ammunition. They are now short of not only advanced long-range missiles, but also classic ammunition and missiles.”

Moreover, since the beginning of the war, the Russian army has been systematically overestimated by western analysts, writes Ukraine specialist Orysia Lutsevych of the British think tank Chatham House in The Guardian. Russia has invested a lot of money in modernizing the army over the past decade, but much of it has not ended up in the army due to corruption: Russia’s armed forces are better on paper and larger than in practice, both in terms of equipment and personnel.

The situation at the front on September 20

The Ukrainian army has been underestimated all along, writes Lutsevych. Not only is that well trained, because since 2014 there has been an almost constant battle in the east of the country. It also benefits from a president of great authority, who set a good example by staying in Kiev and addressing his people daily. The Ukrainian army also feels supported by their country, which has been almost completely mobilized, writes Lutsevuch: companies and citizens raise money for the army, and provide free equipment and services.

According to Lutsevych, the motivation among the military and the sense of unity are important factors that should not be underestimated. “By focusing on military hardware, analysts often miss the software of this war: the quality of leadership, morale, motivation, decision-making and involvement of the entire society.”

Indeed, do not discount the role of morality in military performance, agrees cultural anthropologist Tine Molendijk, who conducts research into the human side of warfare at the Netherlands Defense Academy, among others. “Of course it is not very clear to isolate exactly what role morale has played in the recent Ukrainian successes: that armed forces have more and more Western precision weapons at their disposal, which they use well. And any success that is achieved can give a euphoric feeling that the morally strengthened.” In other words: military success increases the chance of more military success.

But the main difference between the Ukrainian and Russian armed forces, says Molendijk, is that the Ukrainian army has an ideology from which the military seems to draw strength, an intrinsic motivation to fight: “Defend your own country, your own hearth. the idea that the country will be destroyed if you don’t fight on. That feeling is less on the Russian side.”

In the spring, shortly after the invasion of Ukraine, it became clear that many Russian soldiers had not been informed about the nature of the operation, and believed it was an exercise. Or they had counted on being welcomed with open arms by the Ukrainians.

As a result, Molendijk already detected in March a danger of ‘moral injury’ among the Russian military, who easily surrendered or dropped their weapons and fled. Now that the Russian armed forces have lost tens of thousands of people in the past six months, the situation will not have improved for them. “The losses are supplemented by mercenaries and conscripts who had to sign a contract quickly, and who will not necessarily want to go to extremes.”

Still, we cannot be sure that the Ukrainians are now going to liberate their entire country at lightning speed, says defense specialist Zandee. “The Russians still control a huge area. The question is whether Ukraine has enough equipment and men to recapture it all.”

Cubans try to “solve” while waiting for electricity to return

Neymar backs Bolsonaro for the presidency

Robert ten Brink: Christmas special All You Need Is Love there will ‘certainly’ | Media