Federer won first title with Dutch tennis nomad: ‘He was still a child’ 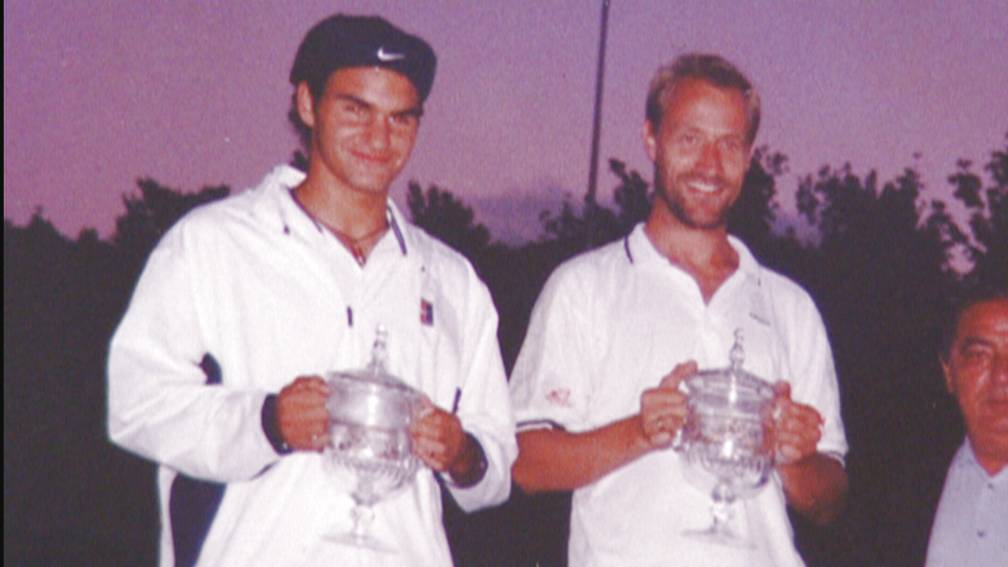 This week Roger Federer can be admired for the last time as a tennis pro. The 41-year-old Swiss concludes a career full of highlights with the Laver Cup. A look back to the time when he was still a teenager and took his first steps in the professional circuit.

On the evening of his 18th birthday, Federer was allowed to raise a trophy for the first time as a starting professional. He won the doubles at a challenger tournament in Segovia, Spain. Together with a Dutchman thirteen years older: Sander Groen.

“We only got off the track late, but then we celebrated the title and his birthday,” laughs the now 54-year-old Groen. “Roger got really drunk.”

It is now 23 years ago, but Groen still remembers almost everything from that week in Spain. “Actually I was going to double with a Belgian in Segovia, but he got into an argument with the head referee and didn’t feel like doubling anymore. Then I quickly looked around and the first I encountered was that young Federer.”

In 1999, Groen had been on the international Tour for ten years. With his cheerful disposition and velvety forehand, he was a welcome guest in the players lounge. “I got along well with Goran Ivanisevic, for example. We clicked and went out regularly.” Together they won the doubles in Dubai in 1997.

Groen would then regularly double with Ivanisevic. But there was no permanent relationship. “I have played with many top players,” says Groen. “Marat Safin, Marcelo Rios, Gustavo Kuerten, you name it. And Federer, though he wasn’t that good then.”

The 17-year-old Federer may have even looked up to the experienced left-handed Groen in 1999. “I asked him if he wanted to play on the left or right side of the field. ‘Not on the left, anyway,’ he said. ‘My backhand is really bad.’ Fine, I could do both.”

“We trained together, went to dinner with our coaches. In between he was mainly busy with the pinball machine. He was only 17 and often behaved like a child. He threw his racket and was even suspended once by the Swiss federation, because he didn’t do his best.”

Via a victory over Javier Sánchez (the younger brother of top ten players Emilio and Arantxa Sánchez) and Julián Alonso (the current coach of Arantxa Rus), Groen and Federer reached the final. And they won it too, on Federer’s 18th birthday.

But winning a challenger is not enough in the tennis world, Groen soon noticed. “Roger and I agreed to double together at the larger ATP tournament in Washington. Based on my double ranking, I had access to the main schedule, but that did not apply to Federer. A man from the ATP came up to me: “You signed up with some youth player and so you have to play qualifiers.” “Okay,” I said. “Then I’ll sacrifice myself.”

After that, the US Open became the third tournament of the renowned Green/Federer double. “Roger unexpectedly lost his first singles in qualifying. Then he no longer felt like doubles.” Laughing: “He dumped me.”

It worked out well between the two and in Tashkent, Uzbek, Groen and Federer played together again. “That tournament wasn’t very well filled and actually I was already counting myself a bit rich. But on the night before the semi-final Roger injured his toe. He was constantly on the playstation, a golf game where he played Tiger Woods That night he got so mad that he broke a chair.”

With a crippled Federer, the semifinal was lost. It would turn out to be their last time together. “I think his coaches especially thought that Roger should double with better players.”

Years later, in 2007 to be exact, Federer was on his way to his fifth Wimbledon title and was asked if he remembered Sander Groen.

“Of course. With Sander I won my first doubles title in Segovia. A challenger. Did he play a big role in my career? No, not that. But it was fun to play with him. His game is different from that from others, he’s just a really laid back guy.”

Ultimately, Federer would win everything there is to win in international tennis. Twenty grand slam titles, six times the ATP Finals, the Davis Cup, Olympic gold. In a career that spanned 24 years, he amassed a sloppy 130 million euros in prize money. Groen earned five tons in thirty years of professional tennis.

“Sometimes I run into Roger at the Miami Open,” he says. “He’s the best tennis player in the world, but to me he’s just that 17-year-old boy who occasionally threw rackets and sometimes did something brilliant.”

On one level, Groen will always outdo the Swiss tennis legend. “A few years ago someone calculated how many different doubles partners I’ve had: he came to more than 170. And then about ten more came. Maybe that’s a world record.”