Cyborg cockroaches to save lives after an earthquake

Thinking that a cockroach can be friends with a human can seem unreal. But their nastier abilities, such as being able to walk through crevasses and survive in almost any condition, have made them a prime candidate for rescue missions.

A cyborg cockroach (a live, but remotely controlled insect) can be the solution for surveying dangerous areas, monitoring the environment, and even identifying people under debris. And for it to be a reality, it needs to be guided artificially and over long periods of time. Therefore, it is necessary, first, a wireless control of his legs and, second, a battery to power the system. The first challenge already It has been resolved and for the second, an international team led by researchers from the Japanese Institute RIKEN Cluster for Pioneering Research (CPR) He has just created a device that recharges the battery through sunlight.

The team led by Kenjiro Fukuda designed a special backpack that carries ultra-thin (0.004 mm) flexible organic solar cell modules that adhere to the insect’s body without affecting its natural movements. In this way, remote controlled cockroaches can be deployed on search missions in inaccessible or dangerous places without having to go to docking stations to recharge their battery. The most important application of this technology is in rescue missions, such as building collapses where people are left alive under the rubble and other humans cannot access.

After the mission, we can remove it and there are chances that the bug will live normally

published in the magazine Nature, the study used the Hissing Cockroach species, present in Madagascar. The main reason is its size (it measures five to seven centimeters), which is a large enough surface to insert the small solar cell and its control backpack. In addition, this species does not have the ability to fly, which makes it easy to monitor. And so that the insect does not have to carry its luggage forever, Fukuda told EL PAÍS that the device can be removed: “After the mission, we can remove it and there are chances that the insect will live normally.” 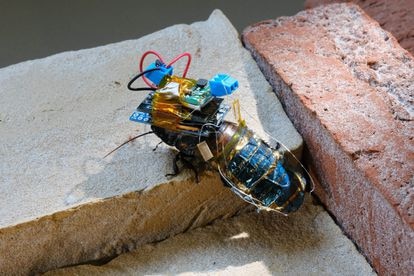 The cockroach with his rechargeable device after climbing an obstacle. Kenjiro Fukuda

Are we closer to controlling other animals? The expert maintains that the key to this question is that insects do not feel pain, and, therefore, “there is no need for ethical approval.” But when dealing with other beings, such as mammals, the application of this type of technology gives way to a complex debate: “That would be a problem because they do feel pain.” This type of electrical recharging mechanism can also be applied to other cyborg insects, such as bees.

However, the circuit control system still needs to be optimized. In the case of the cockroach, so that it can switch from “recharge” mode to “mission” mode efficiently. “Before the battery dies, we need to guide the insect to stay in sunlight. After the recharge, you have to change the mode so that it restarts the rescue route. Creating this system is our next step in research”, says Fukuda, who predicts that within three to five years it will be possible to put cockroaches on mission, depending on the pace of research.