Draining of the Lac des Settons in the Morvan: what do these controversial photos of dead fish correspond to?

How many fish died during the emptying of Lac des Settons? This weekend, photos circulating on Facebook are worrying and scandalizing Internet users. We contacted the DDT to try to see more clearly.

What happened at Lac des Settons? This weekend, photos posted on Facebook go around the Morvan: we see carp and other fish from the lake, dead, piled up in a dumpster and in large bags. A page “The Settons Drain Massacre” was even created.

Since August 16, the Lac des Settons has been gradually emptied of its water. The reason: work to seal the dam, built in 1855, which must be carried out to ensure the durability of the structure. The waters are discharged into the Cure River.

► READ – In the Morvan, the Lac des Settons will be completely emptied this summer to renovate the oldest dam in France (article from May 5) 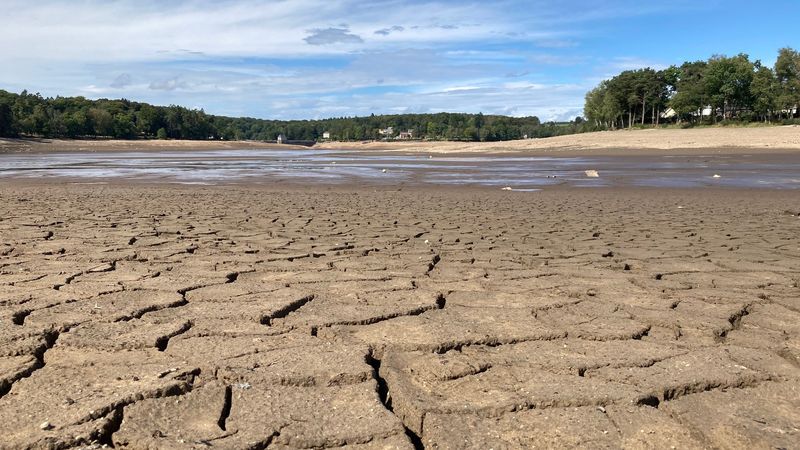 There are only a few puddles left at Lac des Settons. • © Rémy Chidaine / France Televisions

Except that it is impossible to release the fish from the Lac des Settons in the Cure: there are far too many of them, and above all, this would disrupt the ecosystem of this preserved river. As a result, the public authorities, in this case the DDT (Departmental Directorate of Territories) of Nièvre, conducted a fishing operation for fish from the Settons this week.

READ – PHOTOS. Draining of the Settons in the Morvan: there are no more fish in the lake

The dam gates were opened to let the fish through, which were then scooped out using a grate. Seven tons of live fish were transferred to other water points, and five tons left for restaurants, DDT said on Thursday. But the operation resulted in losses, as can be seen in these photos.

These images have provoked strong reactions on social networks. “Shameful”, “inadmissible”, can we read. “I’m sickened, why didn’t you put something in place to try to move them?” asks a user. We contacted the DDT this Saturday to understand what happened.

“Some of the fish died, it was inevitable”, immediately recognizes Pierre Papadopoulos, the director of the DDT of Nièvre. No exact figure for losses, but “the standard is 50/50 when emptying a pond”: 50% survival, 50% mortality. He deplores these “trash photos” which do not reflect reality, according to him. “We were rather worried that all the fish were dead! The work that has been done is already remarkable. We recovered 12 tonnes of fish when we thought they were going to die.”

The fishermen of the Morvan are still wondering. Contacted, one of the two creators of the page “The massacre of the emptying of the Settons”, Franck, explains: “I am not used to doing this kind of thing, but there it was a little too big .I created this page on behalf of all anglers.” He regrets that local fishermen were not called upon more to limit the losses.

“We pay for a fishing license. We could have been called upon, the fishing associations, the public authorities could have asked us for help on an area like that of the lake.”

Like him, Julien Dalle, a Nivernais who is also an editor for a fishing magazine, believes that not everything has been done to preserve as many specimens as possible. “An emptying at this time is not possible. Fish cannot stand in water at 20 degrees. Normally, emptying always takes place at the end of autumn-beginning of winter. The water is colder, more oxygenated, the fish are calmer because of the cold. They become less agitated and therefore risk less injury, and consume less oxygen.”

So, was the oil change done at the wrong time? “I agree: normally, we empty around November”, recognizes the director of the DDT, Pierre Papadopoulos. Except that other issues came into play.

“If we waited for winter to drain, we would not have been able to put the lake back in water by the next summer season.”

It was indeed necessary to think of the nautical and commercial activities around the Settons. It is moreover to preserve the 2022 tourist season that the start of emptying began in mid-August and not earlier. “We also had to think about the timing of the work: in the middle of winter, under a downpour, we should have suspended the site,” notes the DDT.

Why weren’t the fish caught sooner? “The lake is 15 million cubic meters. It is not possible to catch all the fish in such a volume! You had to empty the water before picking up the fish”, answers Pierre Papadopoulos.

Finally, the rumor of a technical problem circulates, which would have caused excess fish mortality: a valve in the dam would have blocked. “It’s nonsense”, evacuates the director of the DDT. According to him, a valve has indeed blocked, but several weeks ago. For emptying the fish, “we have constantly opened, closed, opened, closed the valves, precisely to limit the risk of blockage”. However, he recognizes: “Afterwards, indeed, as the fish find themselves passing through the valves, some are crushed and die during the operation.”

Despite the shocking images of dead fish circulating, the main concern of the public authorities was at the level of the river downstream of the dam: the Cure.

“We must not forget that the Settons is an artificial lake. We have not massacred nature. On the other hand, the Cure is natural.”

The crucial issue was to avoid excessive mud flows in this river classified in the first category. “We had to both manage the fishing of fish from the Settons and manage the preservation of the ecosystem of the Cure. We managed to limit the influx of sediment into the Cure to 0.1 grams per liter of water, so that the rejection was estimated at 8 grams per liter at the beginning!” welcomes Pierre Papadopoulos.