The Parisian supporter seriously injured before Nice-Cologne will be tried 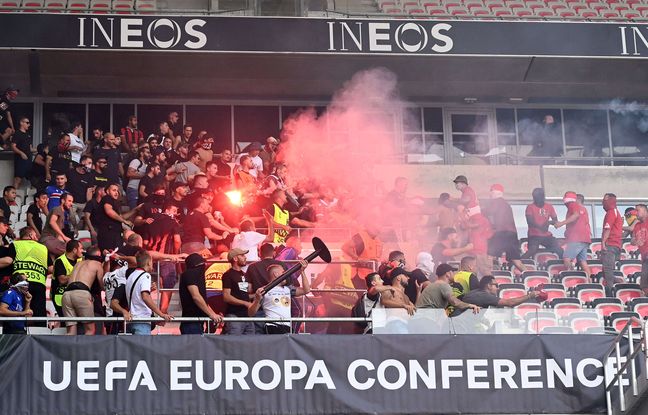 The images of his fall are impressive. The man presented as a “Parisian supporter” who was seriously injured when he fell from one of the stands of the Allianz Riviera on September 8 during the serious incidents which broke out before the Europa League Conference match between Nice and Cologne , will be judged in immediate appearance Thursday afternoon, announces the parquet floor of Nice.

This individual, of French nationality and domiciled in the department of Seine-Saint-Denis, will be brought before the public prosecutor. And should be prosecuted for acts of “violence in a meeting within the framework of a sporting event”, “use of a rocket or artifice in a sports arena during a sporting event” and “throw of a projectile presenting a danger to safety people in a sports arena. He faces up to three years in prison and a fine of 45,000 euros.

Identified as part of “one of the investigations carried out by the departmental security of Nice”, he is unknown to the police, indicates the prosecution. “Interrogated in the context of his police custody, he did not wish to give any explanations about his presence at the Allianz Riviera stadium, nor about his behavior on the evening of the match”, is it also specified.

On September 8, clashes broke out between OGC Nice supporters and those wearing the colors of the German club, near the stadium and in the stands, before the match. Several sources had then confirmed the presence of Parisian supporters in the spaces reserved for FC Cologne.