An inmate disappeared in the Buen Pastor: the detainee, convicted of theft, was not reported in the count 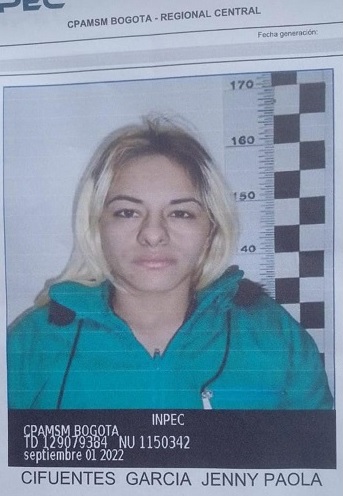 After an inspection carried out in the cells of the El Buen Pastor prison, members of the National Penitentiary and Prison Institute (INPEC) realized the absence of an inmate.

The dragoneantes that while they made the count of detainees in the Bogotá penitentiary. This is Jenny Paola Cifuentes Garcia, who fled this Wednesday at dawn. With this, the alarms went off for the whereabouts of the inmate who would have escaped taking advantage of the change of guard.

According to the first information, he indicates that he was serving a six-year sentence for the crime of aggravated robbery.

At the moment, the authorities are trying to establish what his plan for the escape was and with the help of who executed it. According to judicial records, the inmate had been in patio 03 of the prison located in Bogotá since last week.

The event occurred after the appointment of President Gustavo Petro, Lieutenant Colonel Daniel Fernando Gutiérrez Rojas as the new director of the National Penitentiary and Prison Institute, replacing Brigadier General Tito Yesid Castellanos Tuay, who on August 23 presented his resignation, accepted by the president through a decree.

It is worth remembering that the most recent controversy carried out by the entity occurred precisely this Tuesday, September 13, due to the escape of Digno Palomino, alias Sebastián or el Viejo, head of the Los Costeños criminal group, and who was serving a prison sentence. for a dismemberment case to which it was related.

Preliminary information shows that a group of uniformed men arrived this morning on September 13 to inspect Palomino’s house, located in the Barlovento neighborhood, north of Barranquilla, and they did not find him. Apparently there is no other way to monitor him because the man does not wear the security bracelet, which Inpec had to provide, another fact that facilitated his escape.

Another remembered scandal was that of the escape of Juan Larinson Castro Estupiñán, alias Matamba, which occurred in March of this year, who was being held in La Picota prison and who also left through the main door with the help of members of the authorities who were in charge , precisely, to keep him in that prison. In addition, it was learned that 95% of the security cameras that monitored that penitentiary center were out of service on the day of the events.

The escape of alias Matamba had been in preparation for a year. Pending his extradition to the United States, Castro Estupiñán was held in the Special Measures Unit (UME) number 2 of La Picota. This was ordered by the then director of Inpec, General Mariano Botero Coy. The decision was questioned because, due to the criminal’s background, he should have been sent to the High Security Pavilion (PAS).

On the other hand, days ago an Inpec guard was sent to jail for allegedly abusing his stepdaughter, a 13-year-old minor, in Bello, Antioquia, on at least 50 occasions.

According to the Attorney General’s Office, the dragon of the National Penitentiary and Prison Institute took advantage of his position as stepfather and that he remained in the same house as the minor, to abuse her in different ways.

The abuses of which the 13-year-old girl was a victim occurred between March and June of this year in the house located in the Cabañitas neighborhood, where her mother and sentimental partner of the alleged sexual abuser also live.

Iván Cepeda faced the opposition: “They delight in the disaster they themselves caused” Salary reduction for congressmen: the political agreement is ready for approval in Congress