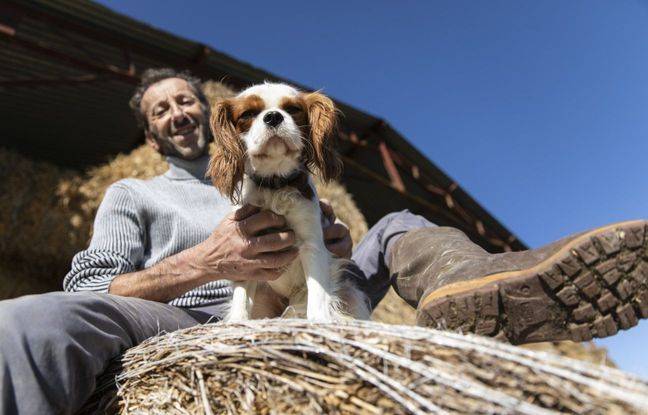 This is a first in the history of Love is in the meadow. Until then, a single farmer had never called in sick for M6 speed-dating. And then, on this fourth evening of the seventeenth season, it happened: tested positive for Covid, Alain, a 59-year-old breeder from Auvergne, had to stay in his hotel room. It is the throat taken that he addressed himself, by telephone, to his three suitors who had made the trip to Paris. However, he coughed up good news to them by inviting the three of them to meet him at his farm in Allier.

A few days later, Alain, 50, was the first to join him from Clermont-Ferrand, in the neighboring department of Puy de Dôme. If he lives in the Auvergne capital, it is because he moved there to “protect his son from gossip”. Because, like Alain le Bourbonnais, Alain le Puydomois first lived in a relationship with a woman before assuming his homosexuality. The two men therefore have more in common than their first names. The farmer did not hide that the very young fifty-something was his “favorite” because of his mail. And that’s good, the suitor confided that “wow, he’s there”.

Jean-Noël, 50, driving instructor, then appeared. “It’s a facelift, I’m in the works,” he explained to justify his toothless smile. A story of descaling gone wrong. Coming from the Oise, he hides nothing of his faults, reveals that he suffers from his celibacy and above all don’t shake him, he is full of tears. Alain can’t get over it, he would have found a man even more sensitive and on edge than him. The third suitor, Gilbert, 64, seems to be a compendium of the other two. Duck breeder and grain farmer, he has lived alone for eighteen months, after a relationship of twenty years. How is the cohabitation between four men under the same roof going to happen? Answer in a future episode.

Let’s stay in the Auvergne – Rhône-Alpes region to hear from Jean and his two suitors, Laurence and Nathalie… Or maybe we should write “Chouchou” because that’s the nickname to which the latter responds when she goes to the karaoke where the trio will spend the evening. Jean discovers the concept of this hobby consisting of singing on a musical tape while the words scroll on a screen. We don’t know if Nathalie is more Nicole Croisille tonight than Annie Cordy, the fact remains that, microphone in hand, she is the star. But it is to Laurence that Jean slips: “You are super beautiful when you sing. We notice that he doesn’t compliment her on her accuracy and her sense of rhythm – and rightly so (we don’t judge, we don’t sing better than her).

Mistake on the husky

Guillaume du Limousin, he met his suitors. The 28-year-old breeder, who has been single for three years, says he is “too shy to flirt” and regrets that girls see him above all as “the good friend”. There wasn’t really any suspense about the two women he was going to invite to his farm. Noémie, Ch’ti chestnut with light eyes, made him cry with his letter. Or rather with the photo of his dog. A husky. Guillaume had a dog of the same breed for eleven years. The image therefore brings back memories and tears. During the head to head, he tells her his emotion. She tells him that her dog is not a husky but a Malamite. But it would take more to prevent the current from flowing between them.

Margaux is the other lucky winner. She is only 22 years old but Guillaume finds her “more mature than some [qu’il] knows and who are his age. And for good reason, she does clay pigeon shooting at European level, asserts that she wants “more than a love affair that lasts three or four months”, and can embark on a comparative analysis of the assets of John Deer and Fendt. You didn’t know that these are tractor brands? She, she knew it.

This Tuesday’s episode was entitled to its “rogue fate” quota, thanks to Thierry who welcomed his two guests. The first, Rémée literally concocted a plan of attack by bustling behind the stoves before hitting the road. Vegetable soup, basquaise chicken, chocolate cake, egg flan…, the hairdresser at home has anticipated a whole menu “to spend more time” with Thierry and less in the kitchen. The farmer can’t believe it: “Nobody has ever cooked me anything except my mom. Remee is hungry and she says it right away: “I like you.” A little later, he confides in front of the camera that he finds her a little too enterprising: “She is in the attack, me, I have to move forward slowly. »

As a result, he saw Sylviane’s arrival as “a relief”: “What I like about her is her discretion. Did Remée have a bad culinary plan? Not so fast: once at the table, all three enjoyed themselves and she instantly got back into the race. “It resets the clocks to zero,” admitted Thierry.

Opposition of styles, always, but this time in Corsica. Sébastien invites Pauline and Léa to spend an evening at the restaurant with his friends. The first is as comfortable as the second is discreet. “How am I going to get to know you if you don’t talk?” asks the farmer. To put her at ease, he reveals to her that it is her that he prefers for the moment… Click.

The next afternoon, the Corsican plants his two contenders to go to a baptism. The two women take the opportunity to take a tour of the village and put things straight between them. Communication, that’s the only real thing to get back on a healthier footing. The atmosphere relaxes, until an old lady comes to break the mood. “It’s a little good but not too much, I don’t like this village,” she told them. We can guess that she is delighted to meet new faces. Besides, she invites them to have a drink at her house. And to get to know Macron. His cat.