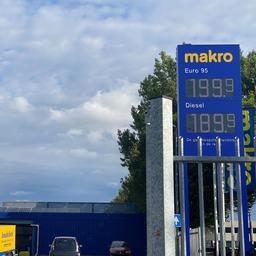 For the first time in a long time you can refill your tank with petrol for which you pay less than 2 euros per liter. It is only slightly less than the psychological limit of 2 euros, and it is certainly not a common occurrence, says Paul van Selms of UnitedConsumers.

“Here and there you will be able to refuel under 2 euros per liter,” says Van Selms. “It may be possible at 5 percent of the gas stations. It then concerns the unmanned.”

The suggested retail price for a liter of petrol has now dropped to 2.19 euros, where it was 2.505 euros at its peak – just over two months ago. At the pump you can now fill up here and there for 1.99 euros per liter. “By giving a substantial discount you will end up with just under 2 euros, and that is nice on the plate,” says Van Selms.

He recalls that it is partly due to the reduction in excise duties that the 2 euro limit is now in sight again. “We are already happy with that.” Whereas a year ago, when we came from much lower and headed towards that border, we didn’t feel good about that.

The director of UnitedConsumers, which has been registering prices at the pump for many years, thinks that the trend will continue downwards for the foreseeable future. “But the prices of the past, when you could refuel for 1.50 euros per liter, are really not coming back.”

On 1 October last year, the average national suggested retail price (GLA) exceeded 2 euros per liter for the first time. Then it went up fast. A reduction in excise duty on 1 April of this year brought some relief, but nevertheless the limit of 2.50 euros per liter was removed on 8 June of this year.