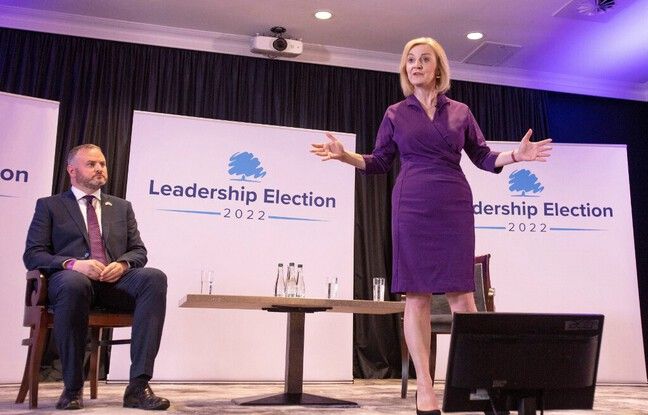 British Foreign Secretary Liz Truss, clearly in the lead, seems in a very good position to become Prime Minister in September to replace Boris Johnson, according to a new poll published on Thursday. She is 32 points ahead of her competitor, former finance minister Rishi Sunak: 66% of Conservative party members support her, only 34% prefer her Rishi Sunak, according to this YouGov / Sky News poll which does not take into account of the 13% who have not yet decided.

Two weeks ago, a YouGov/The Times poll gave him a 38-point lead. Several often acrimonious debates have opposed the two candidates for the succession of Boris Johnson in recent weeks, in a particularly tense economic and social context, with inflation exceeding 10% and strikes in many sectors in the face of the erosion of the government’s power. ‘purchase. Boris Johnson, now absent subscribers, was forced to resign on July 7, after more than 50 resignations in his entourage, tired of scandals and his repeated lies.

57% of members have already voted

The 200,000 or so members of the Conservative Party are voting this summer by post or online to designate whoever will replace him as party leader and therefore as Prime Minister. His name will be known on September 5. Some 57% of party members (mostly male, white, older) say they have already voted, 38% have not. Liz Truss, 47, positioned very right and willingly claiming to be Margaret Thatcher, has according to the same poll 37 points ahead among those who have already voted (68% against 31% for Rishi Sunak).

The poll, conducted among 1,089 party members, also shows that the two candidates remain less popular than Boris Johnson, who if he were in the race would obtain 46% of the votes of party members, against 24% for Truss and 23% for Sunak.